Today, we associate velvet with the epitome of softness, a mythical reference point for other things. However, it is also just a fabric - but a one that has quite a unique position in men's fashion.

In women's fashion, velvet is nothing special nor surprising - it is a perfect cloth for evening dresses and other spectacular creations. Due to its delicacy and susceptibility to dirt, it does not fit into the role of everyday fabric, that is, a one from which one could make "ordinary", practical and durable pieces. Even the fact that the vast majority of velvet produced today is made of cotton (or viscose, or even polyester), not silk as it used to be in the past, does not change much.

Velvet was also - and is, although not as much as before - a very expensive fabric. It is taht because of production technology: it is woven on special, double looms that simultaneously form two connected layers of fabric, one on top of the other. A special blade cuts in the middle and separates them, what leaves the surface of the finished fabric with characteristic pile effect. This method, unfortunately, is time-consuming and requires a specialized machine park, what generates costs. Although thanks to progress, it is faster and cheaper than it used to be and it is not a fabric reserved only for the nobles and kings, However, it is still a process that takes more time than producing a classic, smooth fabric. 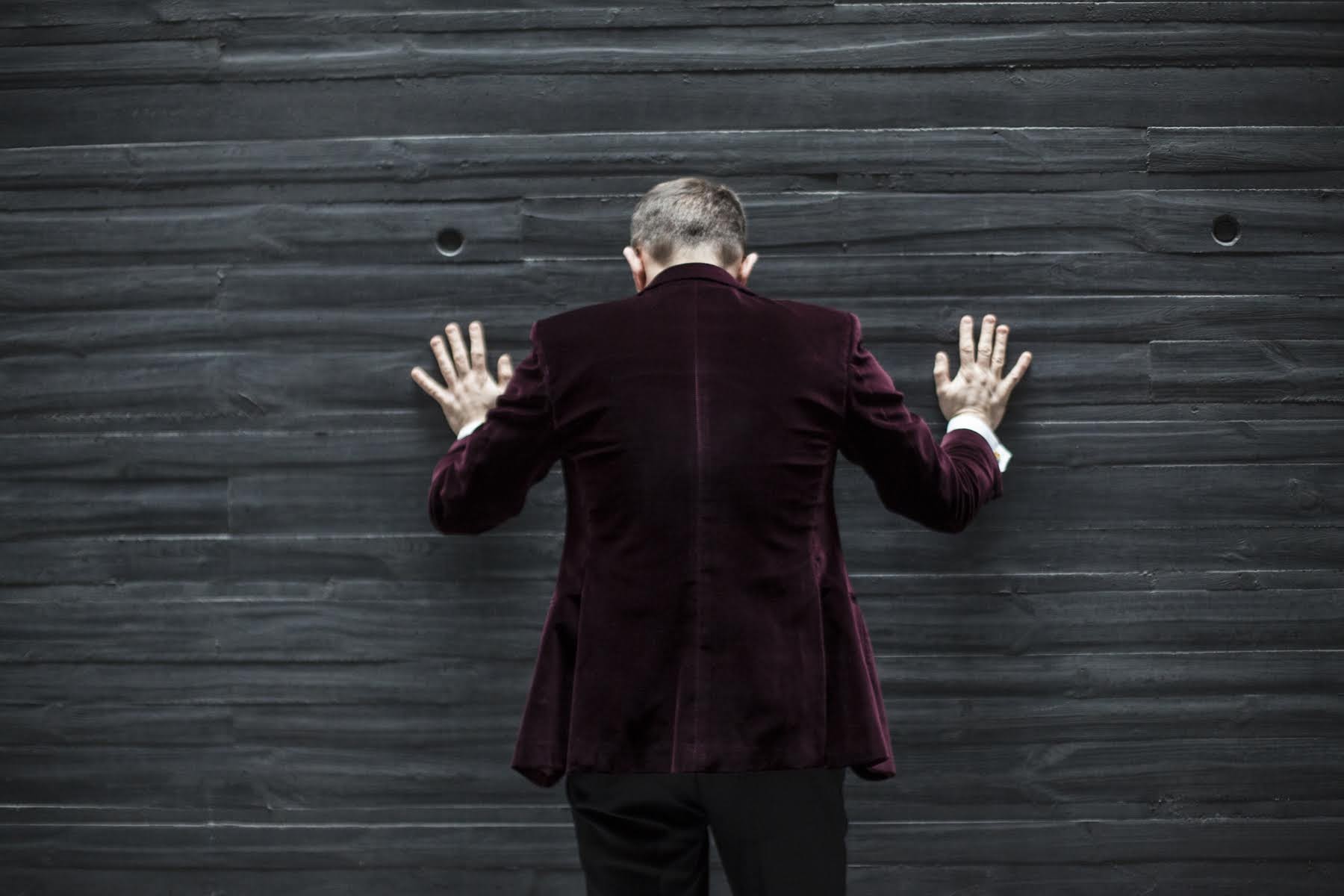 The high price and the already mentioned low practicality meant that velvet has never become popular in men's everyday fashion, which usually presents a more mundane approach to clothes. However, there is one special element of the wardrobe, made of this fabric, that hold quite a special position - a velvet jacket, also called a smoking jacket. 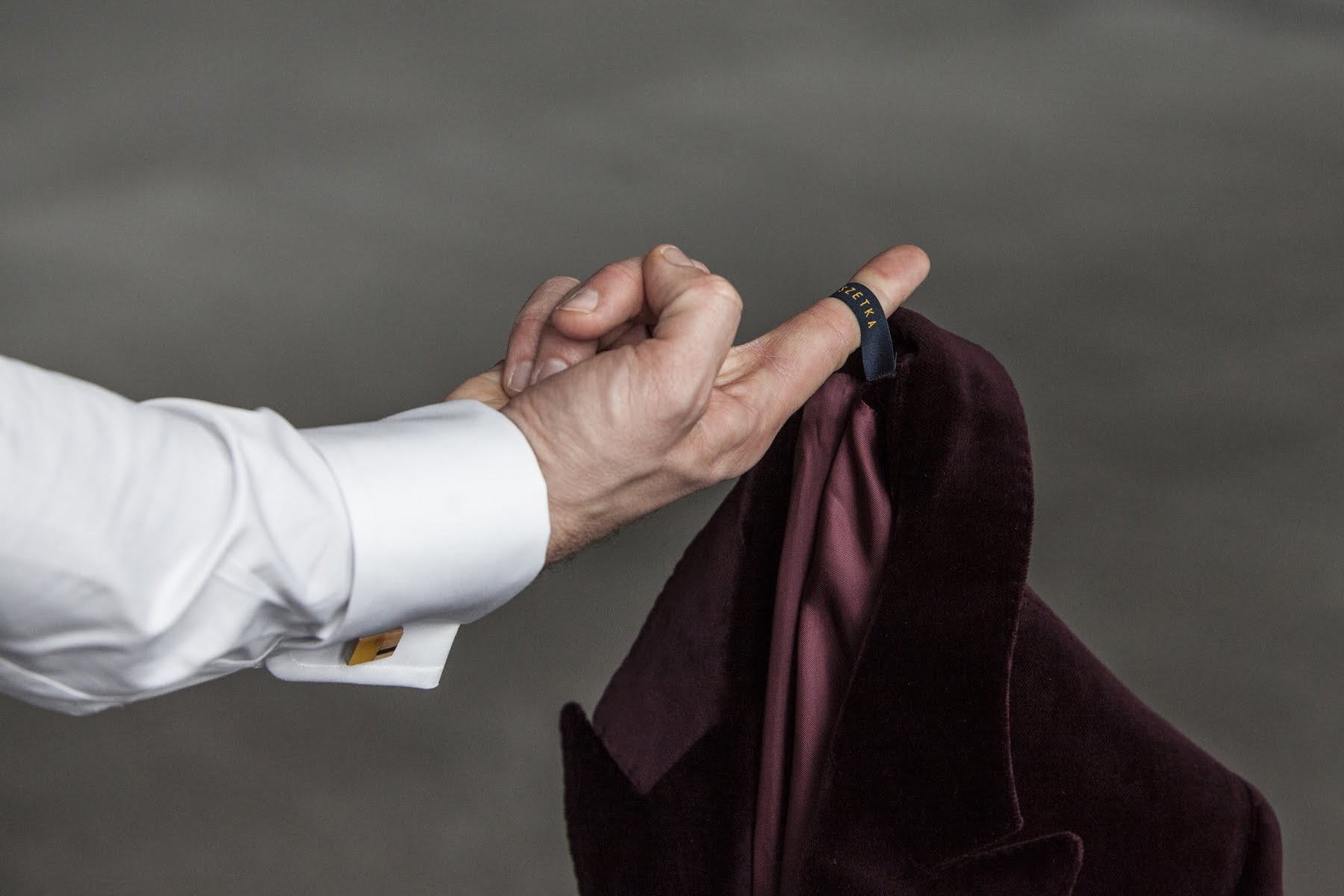 It is a thing that began its life not as a garment but rather a substitute for it, as a cover worn over a white tie or a instead black tie's jacket. The gentleman wore a velvet jacket only for a brief moment when he went for a cigar - so that the proper part of his evening dress would not soak up the smell of the smoke.

Over time, however, the velvet jacket evolved into an independent wardrobe item... or even two. On the one hand, it became a posh dressing gown, worn only indoors, often changed into after coming back home. The second relative of the smoking jacket is the velvet dinner jacket as we know it today, which looks like part of a tuxedo, but varies from it by fabric and (sometimes) details. 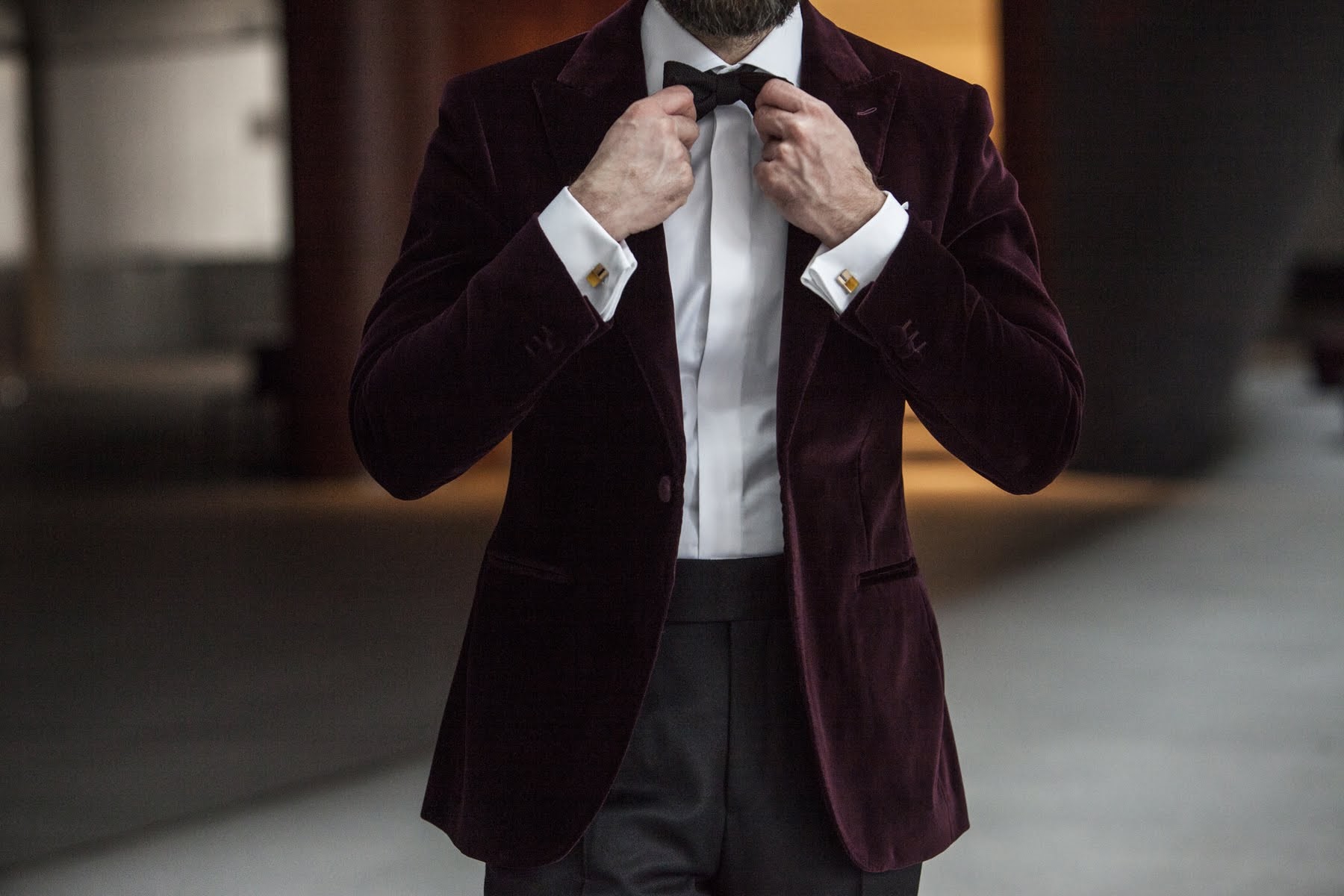 Fast forward to modern times. Currently, thanks to the image depicted in popular culture (and especially in movies), the velvet jacket (worn with black pants) has gained the "alternative black tie" status, becoming a substitute for classic tuxedo. Although theoretically it is less formal, in practice hardly anyone pays attention to it. The fact that the velvet beautifully reflects the light makes the jacket look noble and unique, according to some - even more than a tuxedo. We can safely say that in this case the old rules and hierarchy does not find application and we can talk about pretty the same formality level. 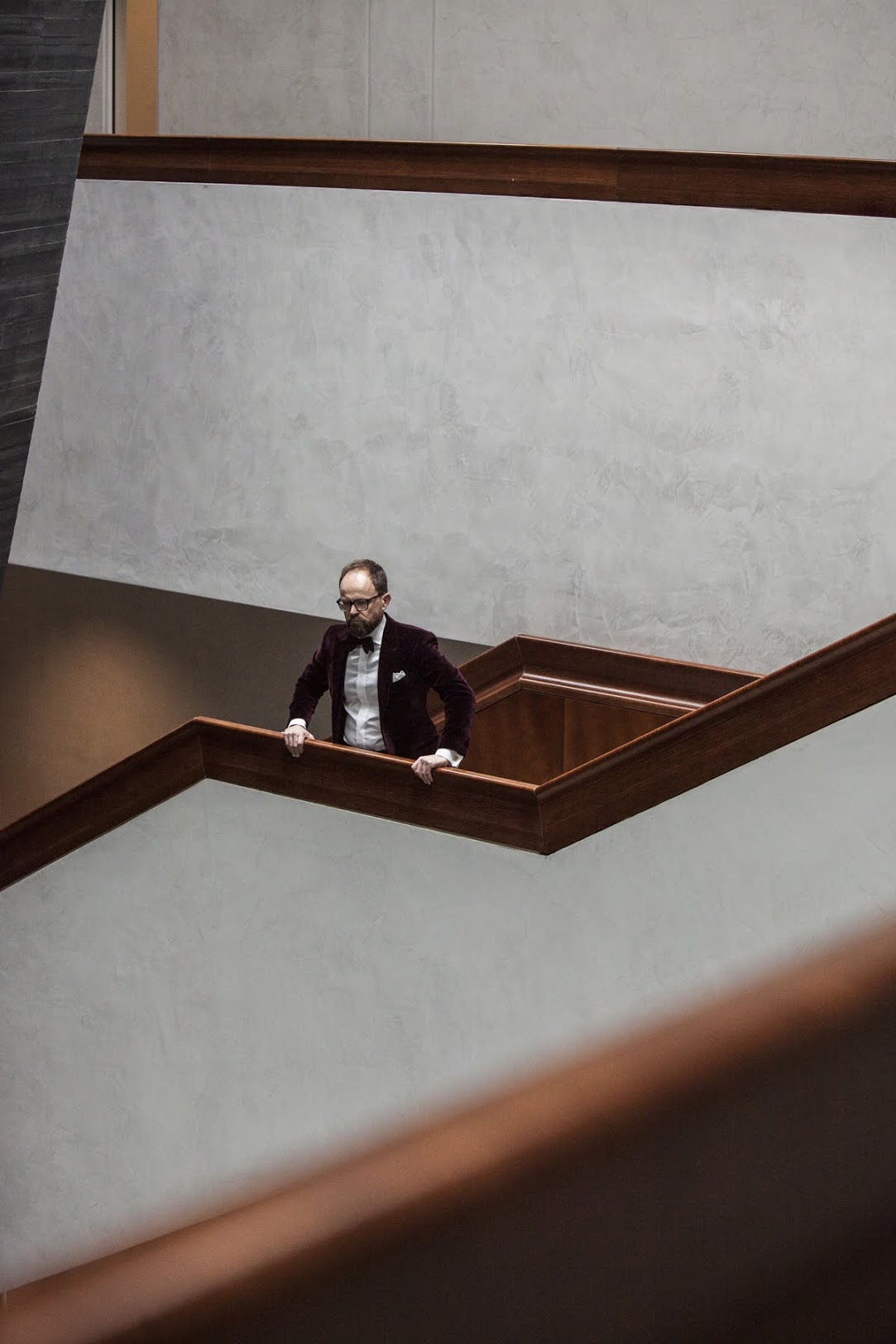 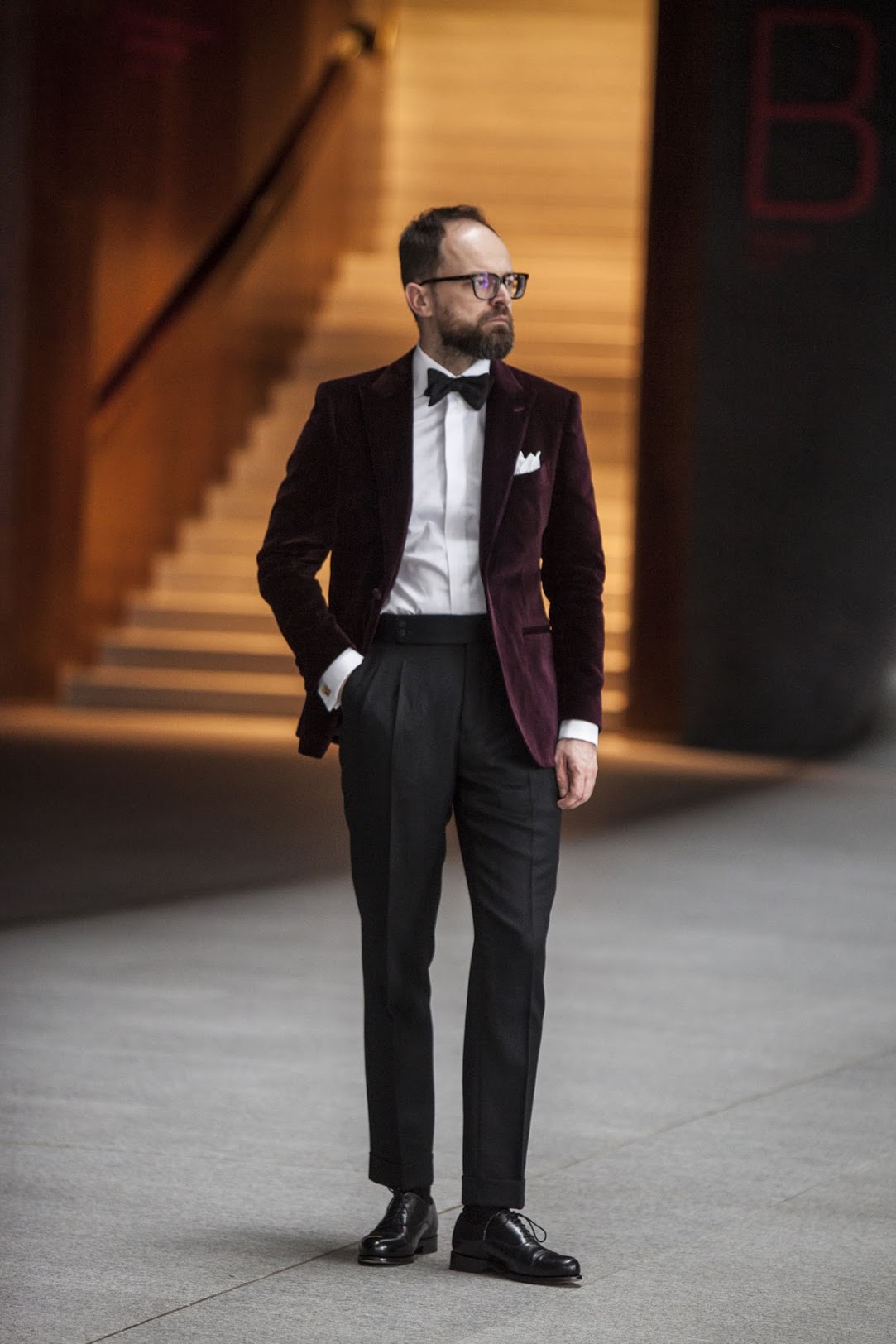 However, this does not change the fact that the velvet jacket is a bit more versatile than the classic tuxedo, because it is not as deeply rooted in conventions and is more flexible in form. Although it is still an element of evening attire - due to the fact that neither velvet nor black pants look as good in daylight - it can be worn in a bit less formal way.

Example? For the outfit shown in the pictures, it would be enough to replace the shirt with a bow tie with a thin, black turtleneck to get a completely different and equally phenomenal (though not classic) evening dress. A subtle play of textures and colors helps to create a somewhat eccentric but sophisticated outfit that is surprisingly elegant and serious. 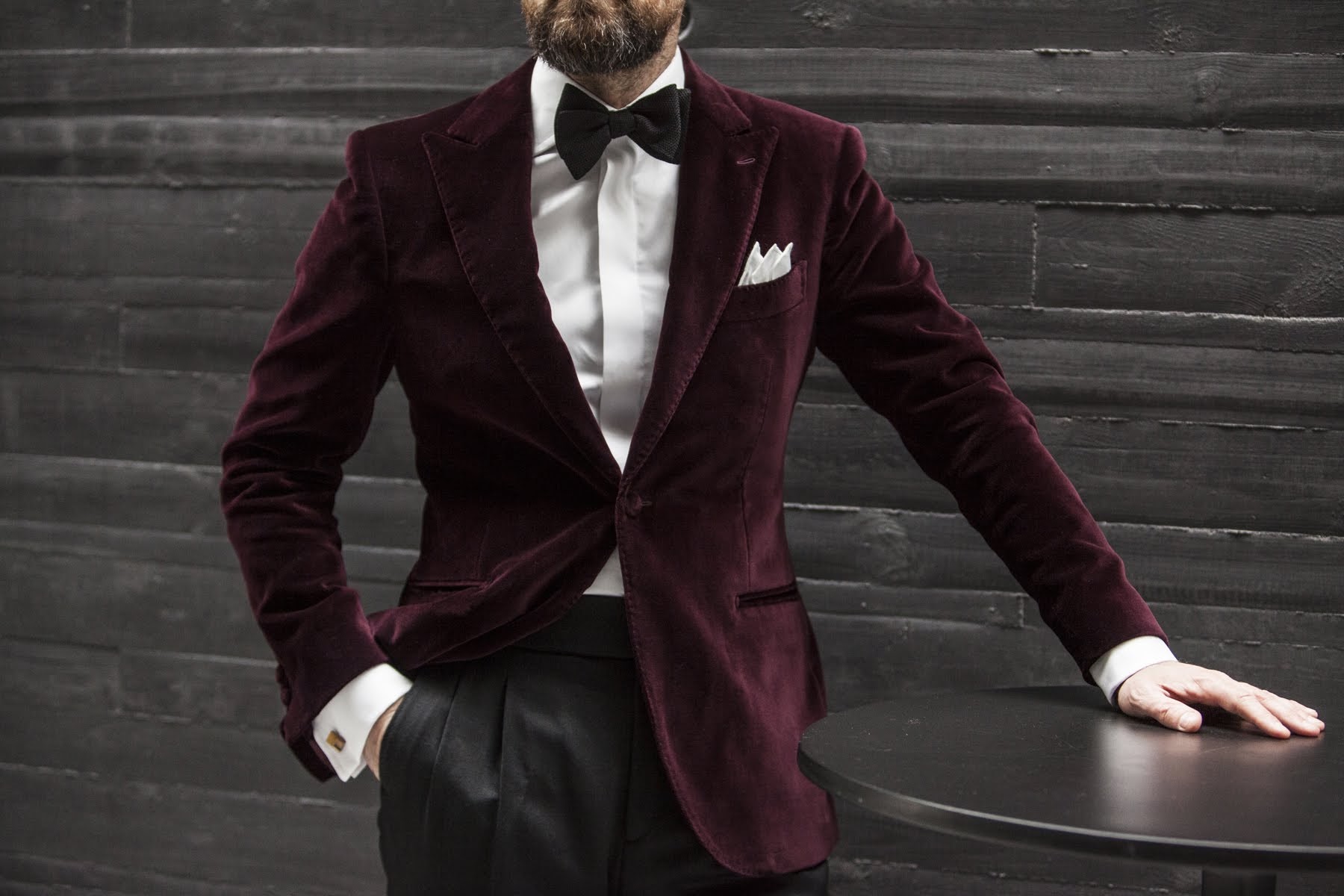 For the beginning of the new year, as if with a carnival in mind, a jacket just like that appeared in the Poszetka's collection. Made from luxurious, cotton velvet by Holland & Sherry, in a beautiful, deep shade of burgundy, also available in a set with black pants. 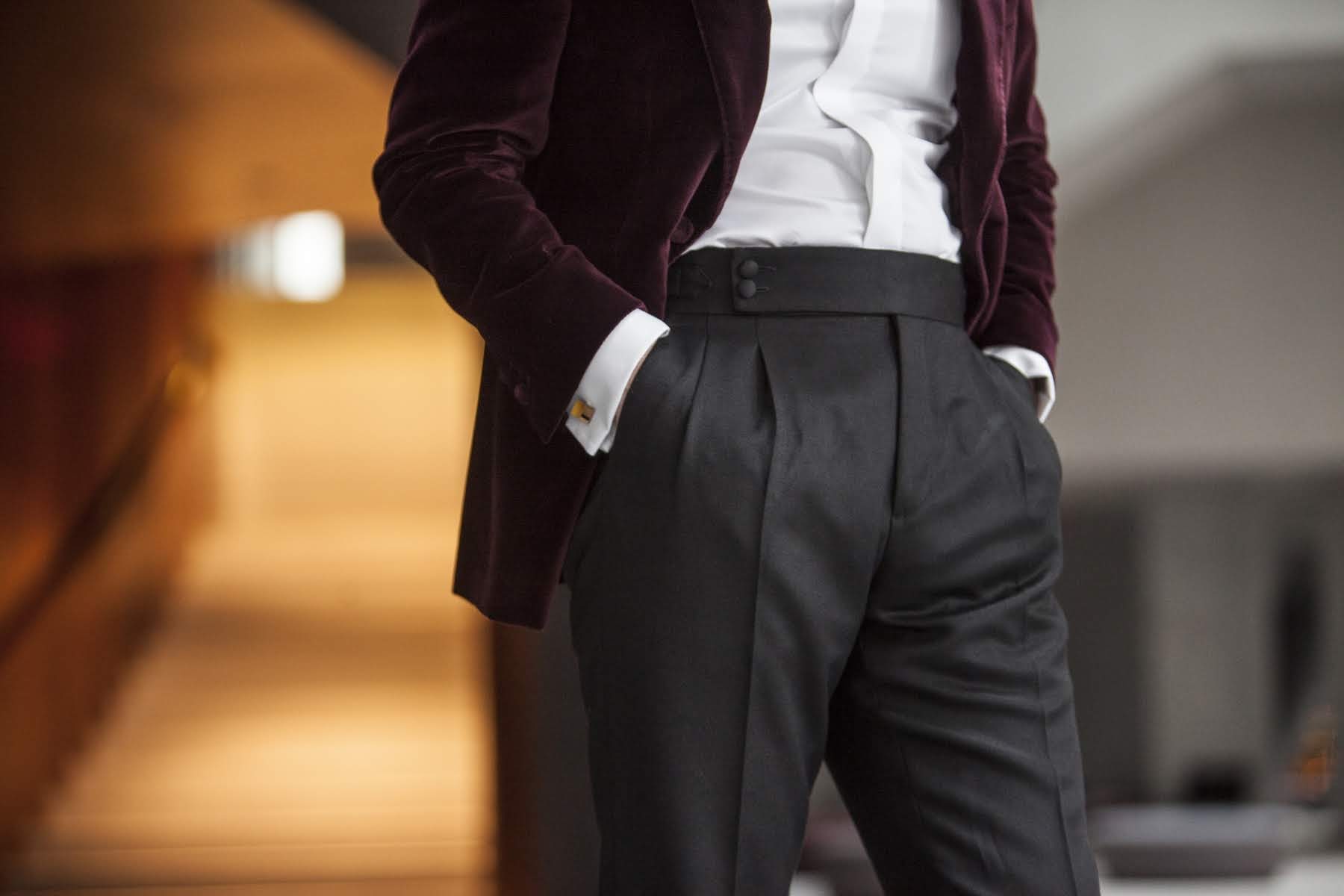 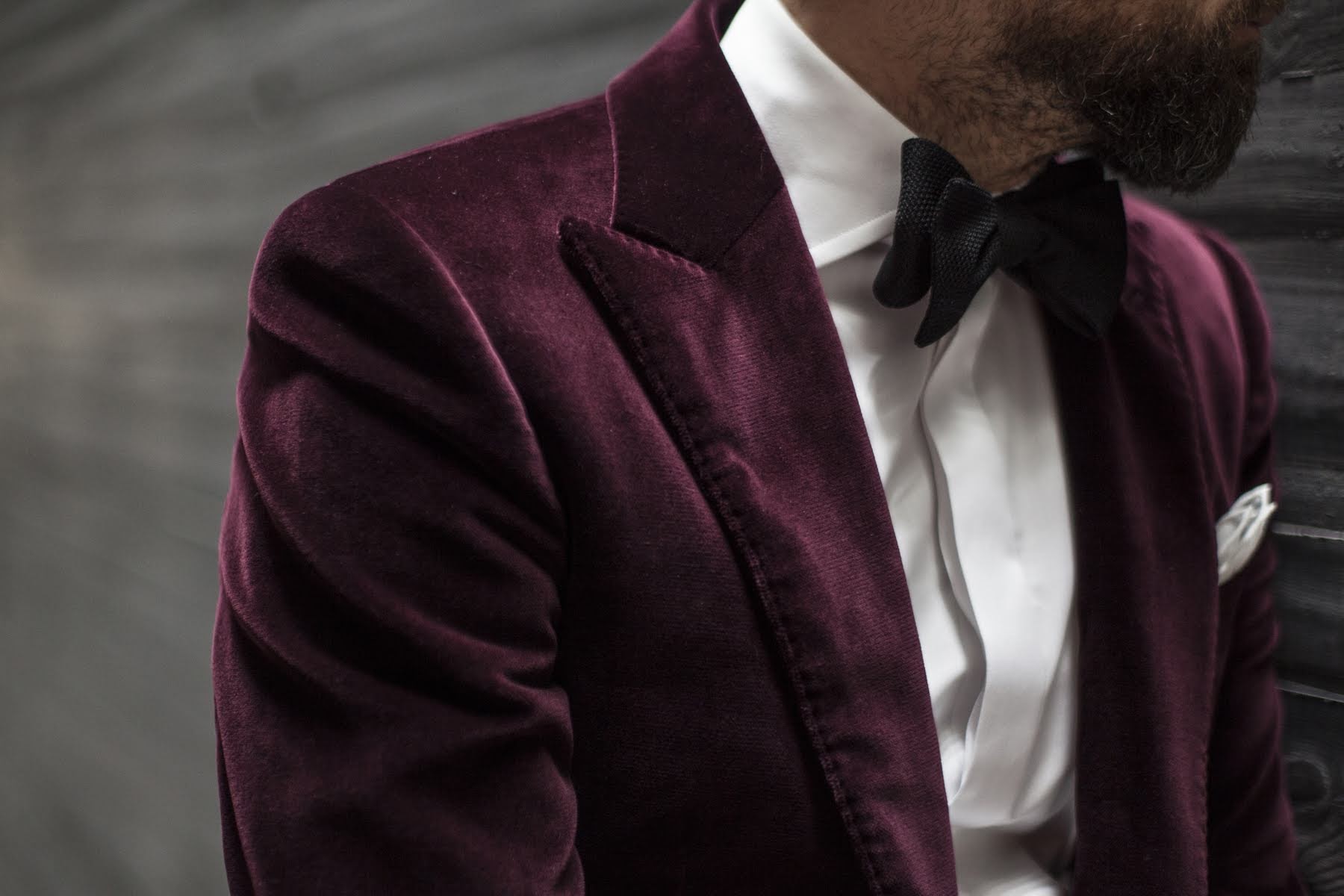 Referring to the slightly less classic combinations mentioned earlier, it is worth noting that black silk facings on lapels, buttons and pockets have been abandoned here. This, a totally acceptable deviation from the rules applicable to classic tuxedo jacket, helps dressing this item outside the rigid rules of black tie. Naturally, the choice of peak lapels instead of a shawl collar that goes with it, allowed to create a jacket that can not be mistaken with either a sports jacket or an ordinary tuxedo - it is a piece of clothing with its own, strong and distinct character. It is an element of evening dress worthy of the new 20s, those of the 21st century. A proposal for a fresh interpretation of the classic principles, clothing for rapidly changing and casualizing times. 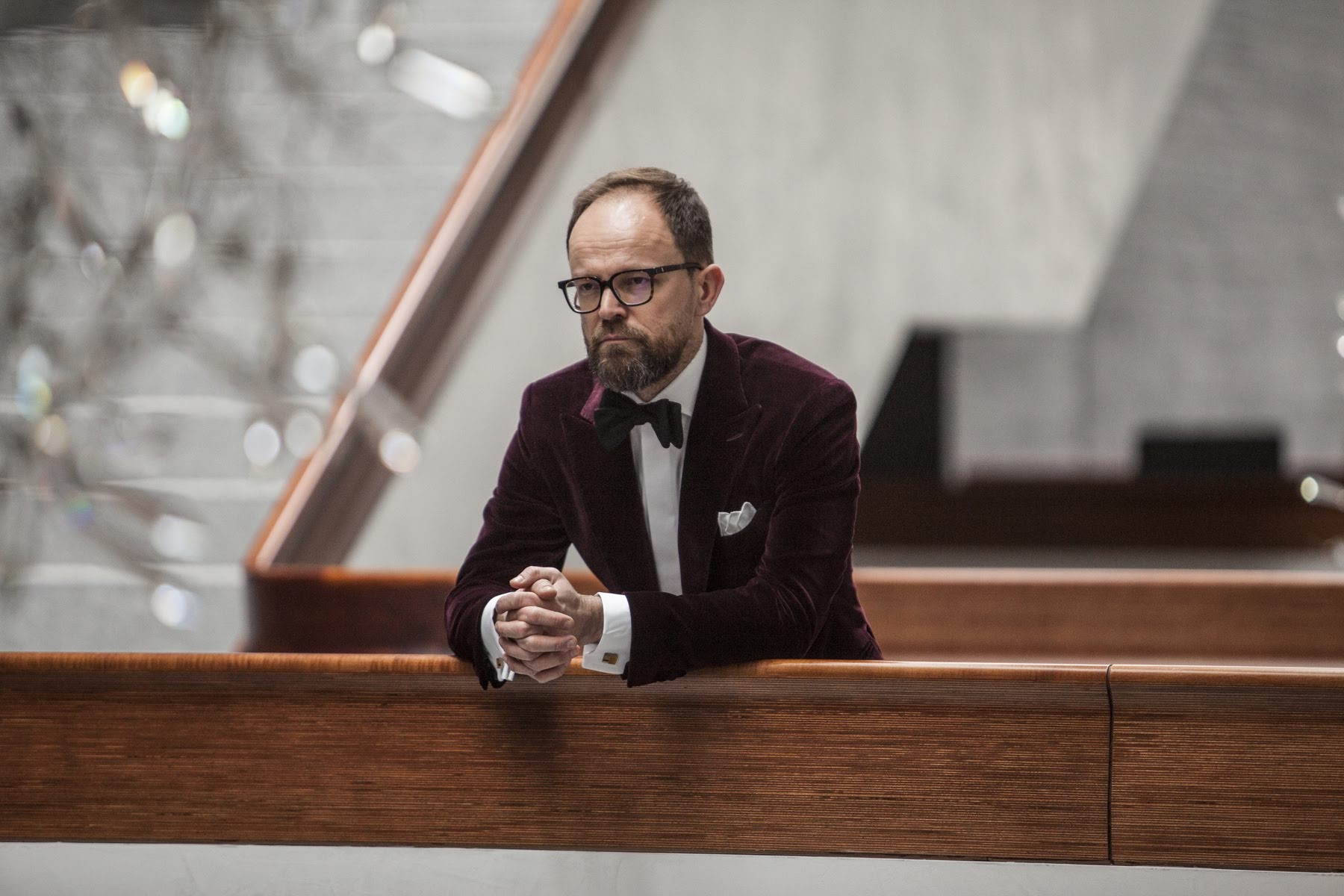 And when to wear it? In a set with a white shirt and a black bow tie, it works well for parties where the dress code “black tie optional” applies, a wedding where the groom wears a tuxedo, balls and galas, concert halls and operas. With a black turtleneck underneath your jacket - for going out to elegant restaurants, events where the majority of guests will be in suits, or for theater plays. In the least formal version, which we can recommend - that is, where under the velvet jacket there will be an unbuttoned white shirt, on the legs black or dark gray pants with a crease, and on the feet black loafers instead of oxfords - it is a suitable outfit for conquering night clubs, going to smaller theaters and generally nights out in the city. 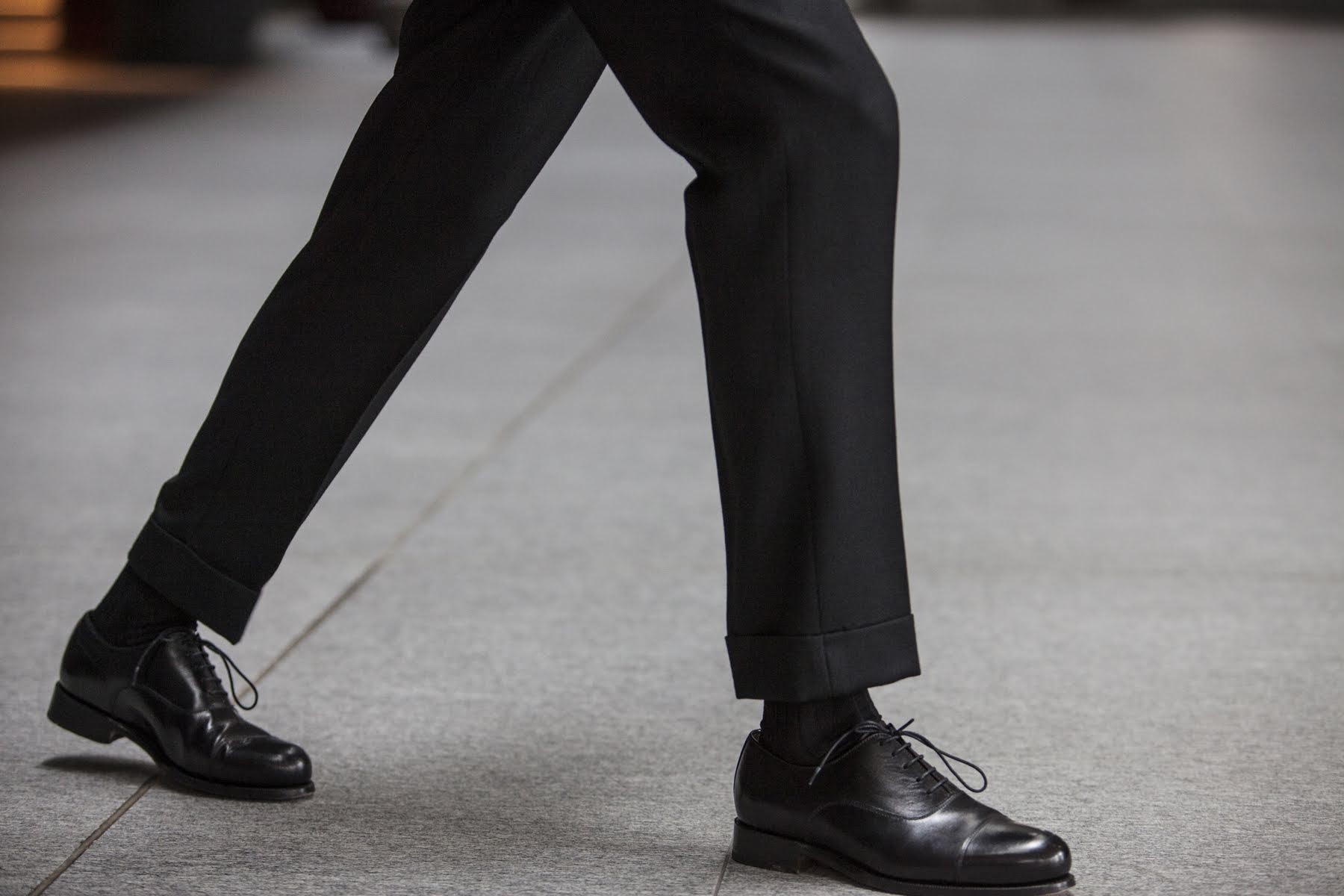 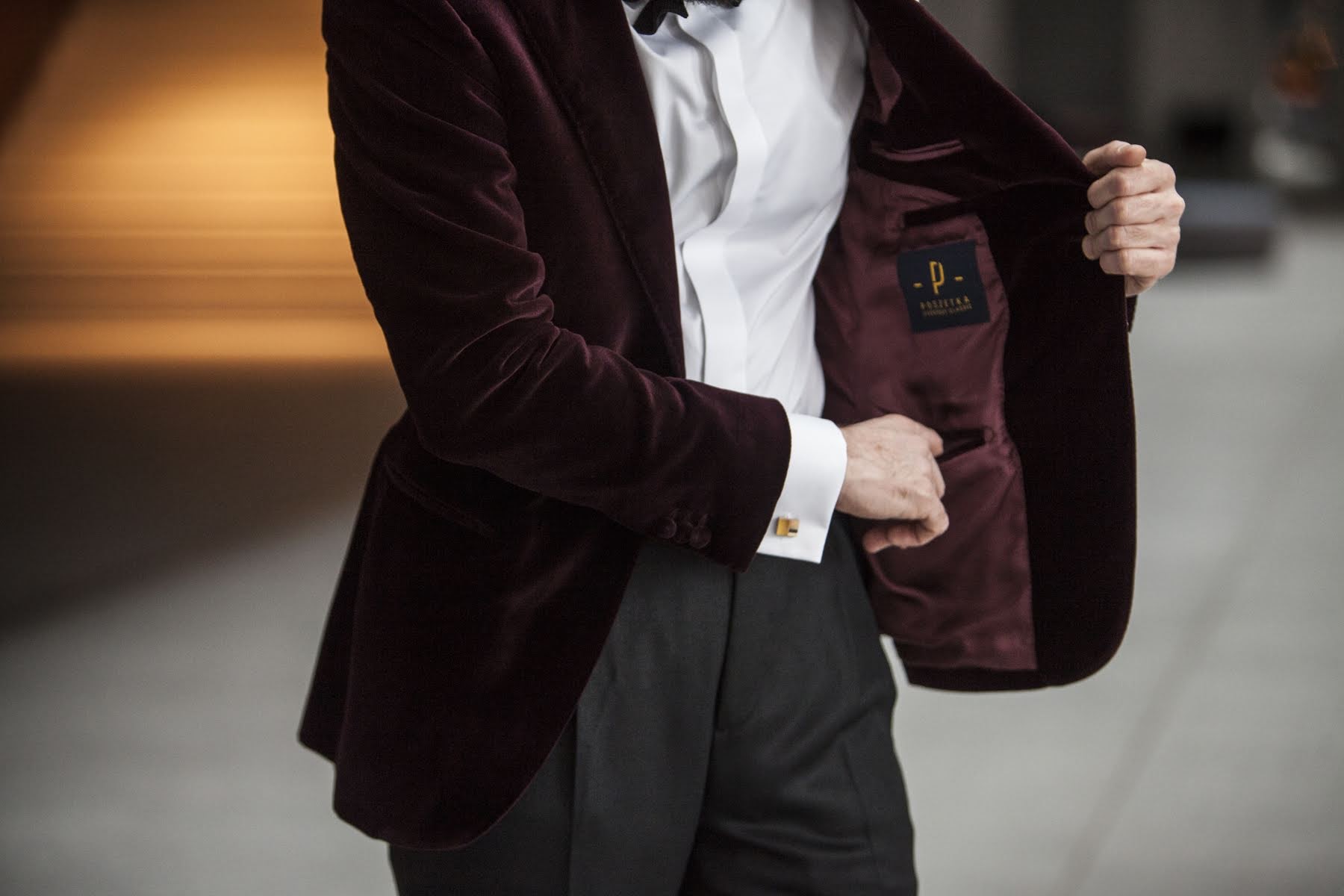 Appearance is one thing - but the wonderful, delicate velvet softness is another. However, there is not much to write about it, you have to find out for yourself ... and we encourage you to do so. It can easily be that this velvet jacket will become your favorite companion of urban escapades and evening shenanigans not only because of its presention, but also great comfort and softness! 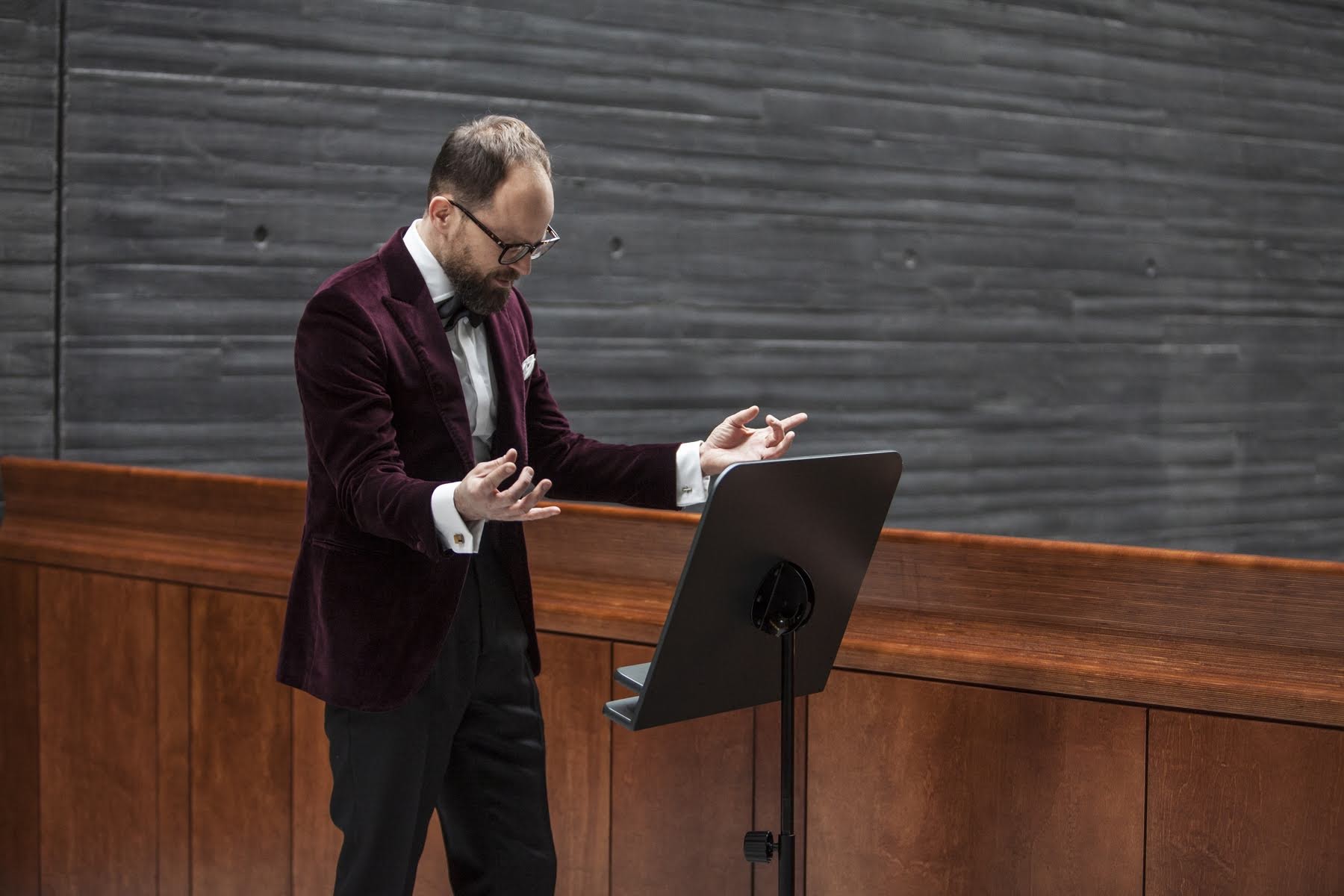 4.89 / 5.00 2986 reviews
IdoSell Trusted Reviews
2022-08-08
Great fit, great fabrics, great sartorial style for an affordable Price !
2022-07-31
Nice pants. Only let down are the buckles, they are in a cheep material insted of chromed steel or stainless steel. Otherwise 5 stars
View all reviews (2986)
This page uses cookie files to provide its services in accordance to Cookies Usage Policy. You can determine conditions of storing or access to cookie files in your web browser.
Close