Although at first glance it may seem that there is no blazer in the current Poszetka's range, after a careful analysis you will be able find as many as... three.

This statement is only a bit far-fetched - because although they are not blazers per se, the idea behind them is similar to the original. There are no golden buttons, university patches and completely plain navy blue fabrics in this collection, but there is something equally important, but immaterial - great versatility and the possibility of pairing with items of various levels of formality. 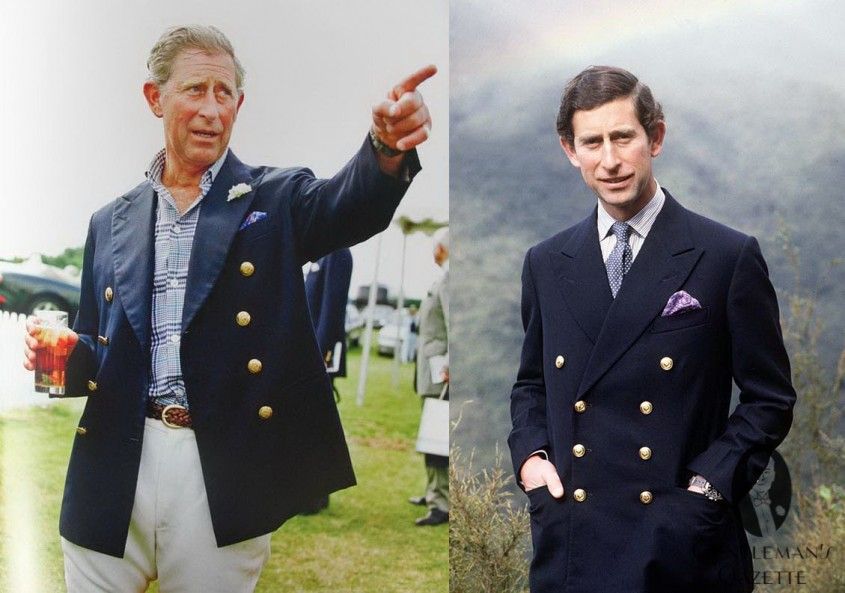 Although the term blazer used to be much more strict back in the day, nowadays it is used much more widespread, for virtually any universal navy sportcoat, which is not an orphaned part of the suit and was made of a not too shiny fabric. Now a real blazer is simply a jacket that will look go well with gray flannel trousers, beige chino, military greens and washed jeans - with virtually any accessories and shoes. A swiss army knife of every man's wardrobe. Supposedly.

It may sound crazy, but if the definitions loosen up so much that only the color is left from the original, why not go further and let it go under some conditions?

The title three blazers are all some kind of jackets, none of which is strictly navy blue - although two have something in common with this color, one practically not. Time to reveal which clothes from Poszetka's collection we are talking about exactly! 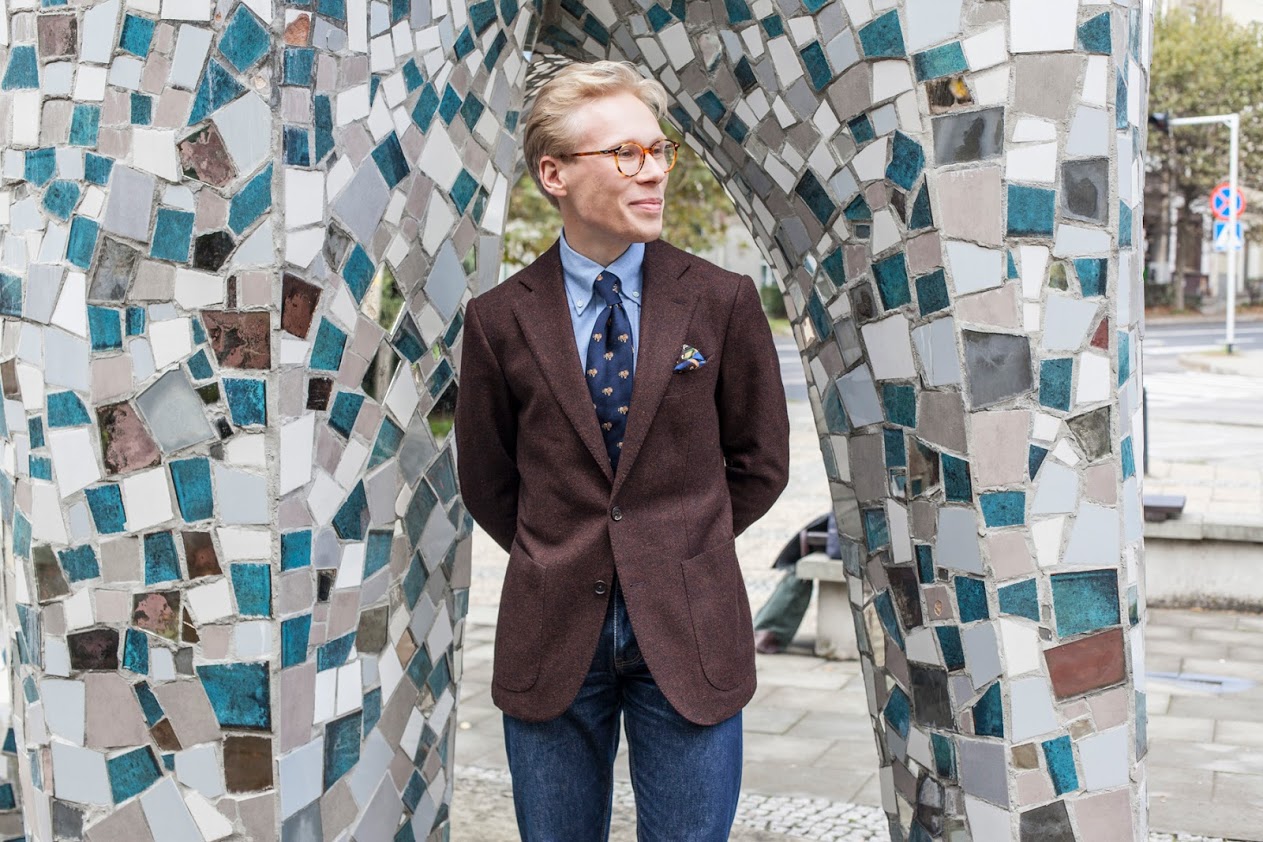 First of all, a brown tweed jacket. Why? Because it is the foundation of a winter wardrobe. It's hard to find a more versatile option for this time of year - it is warm, but not too much, it drapes perfectly thanks to the substantial (but not too heavy) weight of the fabric and matches virtually anything. White shirt, gray flannel pants and a tie for a business meeting? Yes, sure. Khakis, striped OCBD and knitted tie? Ivy League vibes, here you go. Turtleneck? Thin or thick, navy blue, gray or other, whatever. Jeans? Brown jacket pairs much better with dark ones than the navy one, with washed denim at least as well.

This jacket fits into the context reserved normally for a more classic blazer with no problem. The fact that tweed it is made of is a much softer lambswool (not an ordinary, itchy shetland) helps it to blend into the more modern, city environment. For us it is a perfect everyday sportcoat for the colder times of the year. 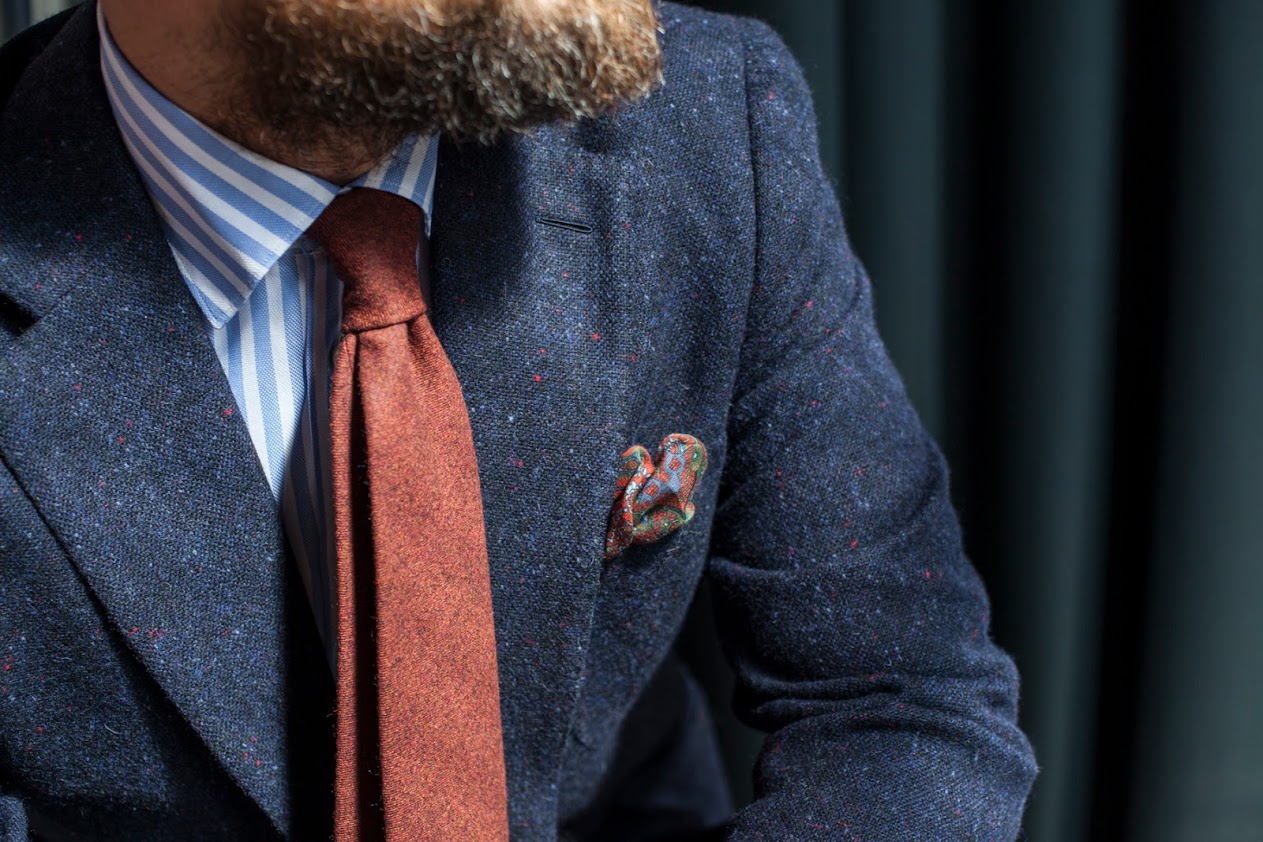 We dedicate our second proposal to those who still have a weakness for navy blue. It is a classic, but with a strong twist - navy Donegal Tweed jacket. Although the base color is correct, all the other features of the fabric are almost the complete opposite of what is associated with a classic blazer. Instead of a uniform shade, there is a mosaic of fibers in different colors, with a distinct red flecks, so characteristic of donegal. The texture is much rougher and the cloth is thicker and denser. In this case, even an untrained eye would recognize that it is a less formal sportcoat than a blazer, much closer to the stereotype of a "tweed jacket" rather than a "navy blue jacket", simply. 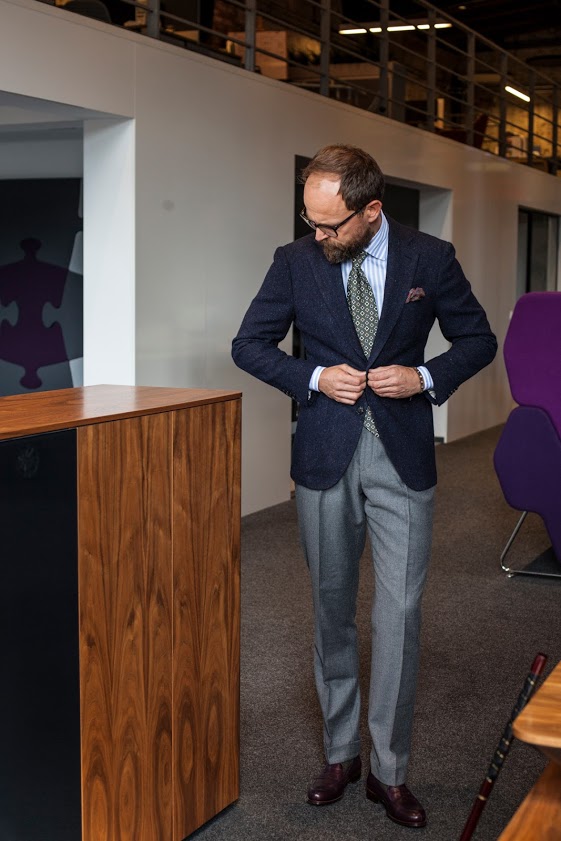 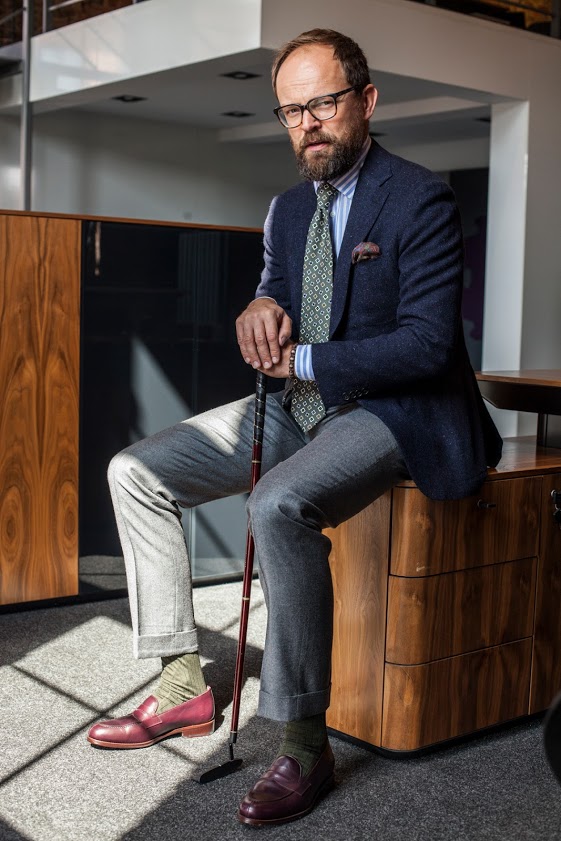 It does not make it any less versatile - it still pairs well with gray trousers, acting as the so-called "menswear uniform" (navy blue top, gray bottom), colored chinos and cords, also some jeans. A classic blazer may not be replaced by this one exactly, but for those who are looking for some more interesting (and more casual) option, it may turn out to be an even more attractive and useful alternative. For the others - it works great as an addition to the wardrobe with some classics inside. 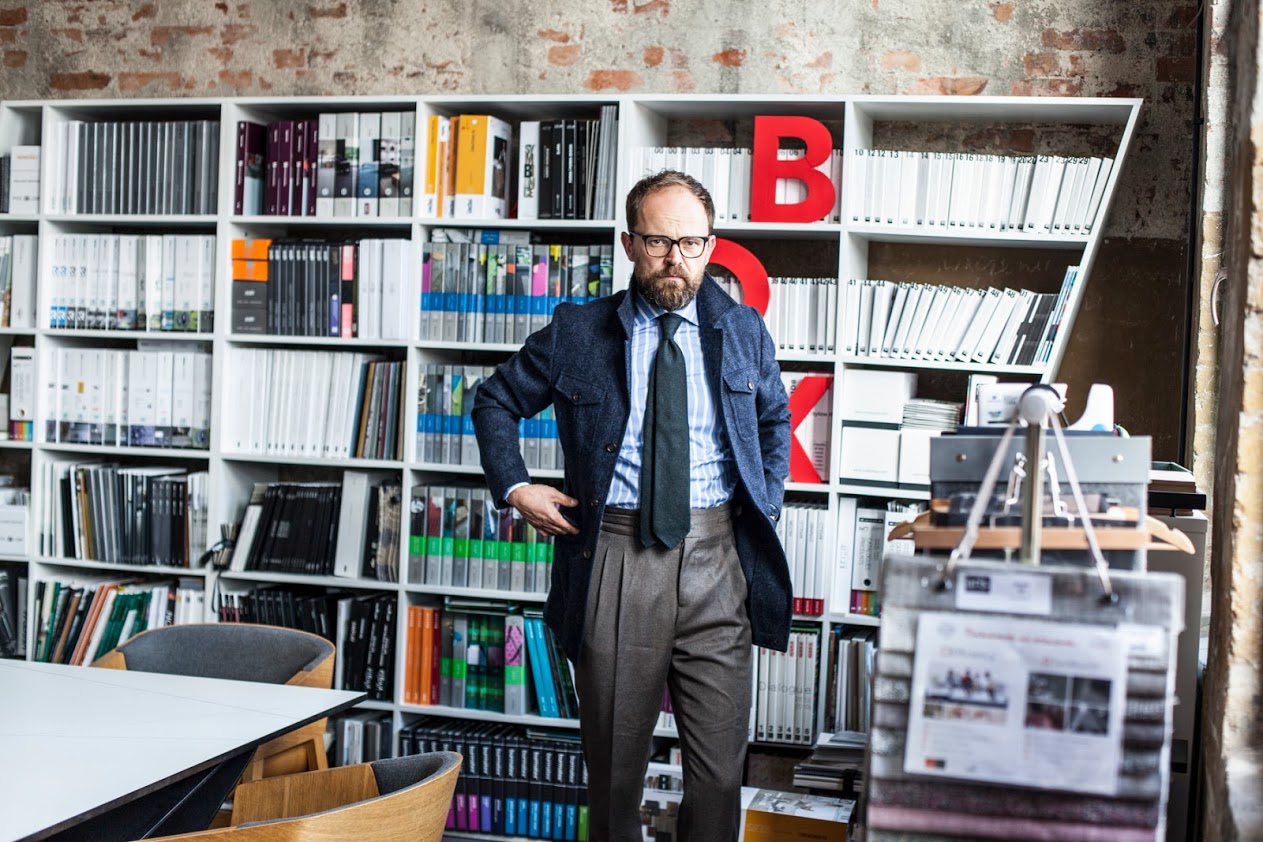 Time for our last, most outstanding proposal, which goes the furthest away from the definition of what a blazer is, even a modern one. It's not even a sportcoat - it's a safari jacket! One of our safaris, the one made of navy blue herringbone tweed, works well in this role. It is a casual blazer for today's, rapidly changing and casualizing world. 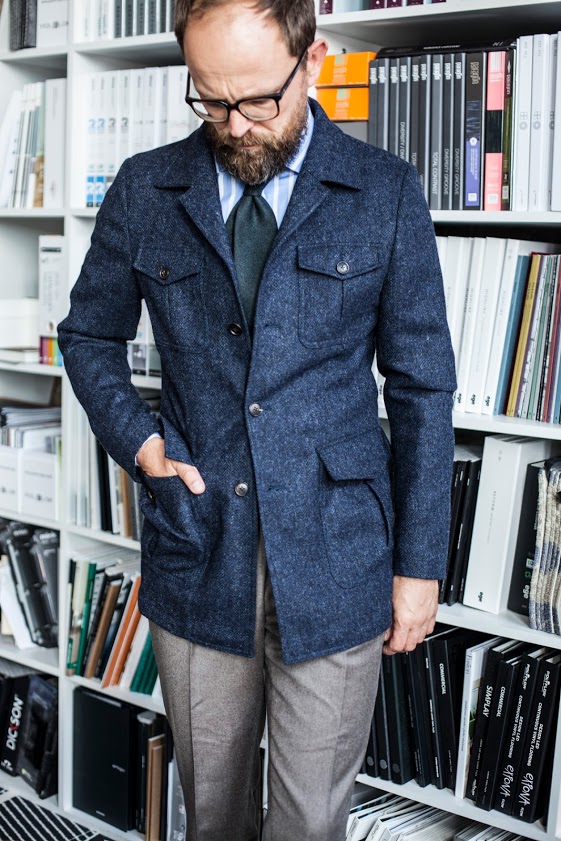 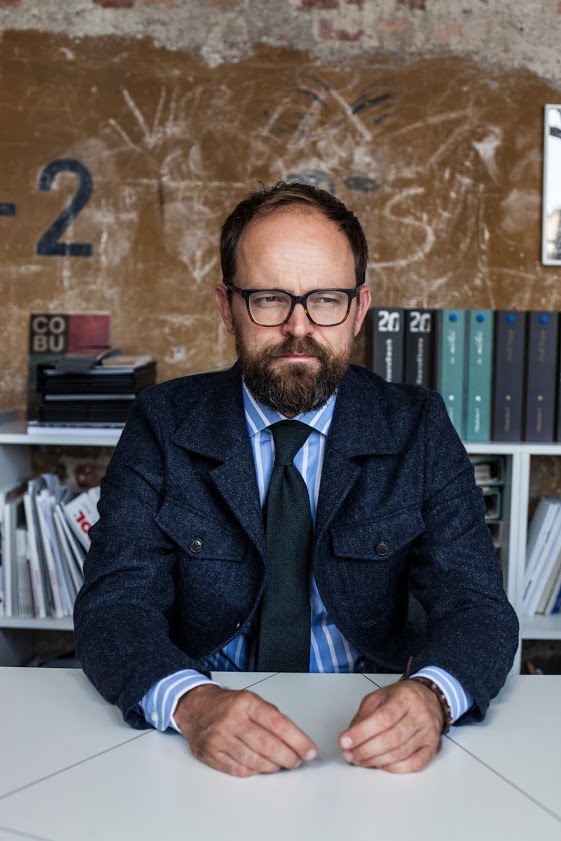 Although it may not be the most classic shade of navy blue, the color is incredibly versatile and can be used as a background for many other colorful accesories. The formality, although lower than in the case of the above-mentioned two sportcoats, is still sufficient to wear a tie with, and in the same time low enough to function as an outer layer on a colder day. We can wear this safari jacket blazer both to the office with a loose dress code and for a weekend walk. Isn't it the universality we expect from our clothes nowadays? 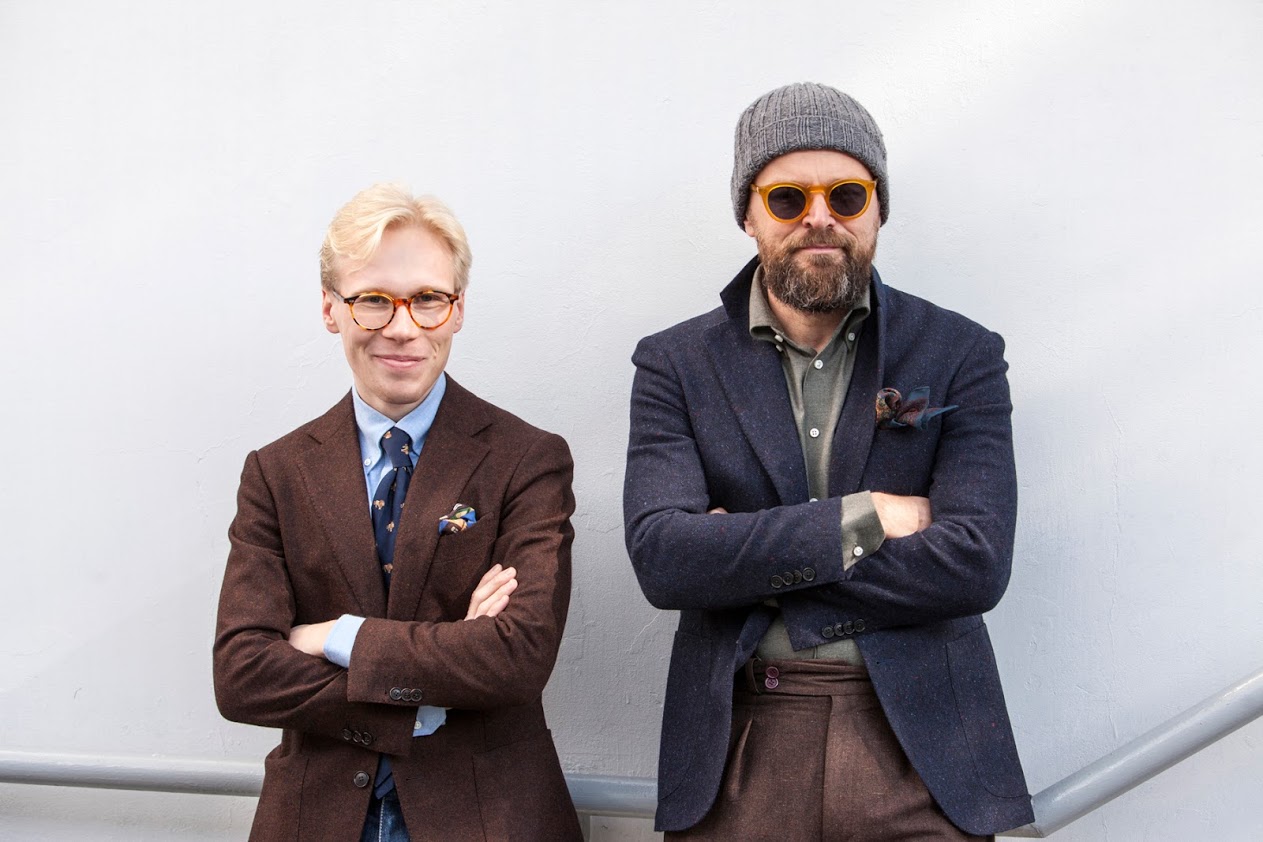 Summing up: although you haven't seen a blazer in a literal sense today, you have met three other, quite different propositions. Each of them can effectively replace it in its own way, and depending on the needs - even with a beat it!

We encourage you to step out of the classic framework - so if you have your own perfect candidate for this blazer-not-really-a-blazer position, just wear it with a joy and pleasure and do not let them tell you that the classicy navy blazer is always the best choice... or at least not for everyone.