This time, contrary to what you might think, we will not be talking about tweed! Well, at least not directly, because talking about this iconic pattern without mentioning it is practically impossible…

The title gun club check is, after all, related to tweed, but not inextricably.

Before we move to its story and the genesis, we shall start with defining what exactly the gun club check is. Well, it is a pattern that: 1) is based on a small, regular check (more on it later), 2) has some kind of other check placed upon it (or at least some kind of regular colour variation), 3) incorporates at least three different shades. I admit, these are not very precise criteria, but after you see some examples, you should instinctively know what could be called the gun club and what could not. It is much easier to show than to explain! 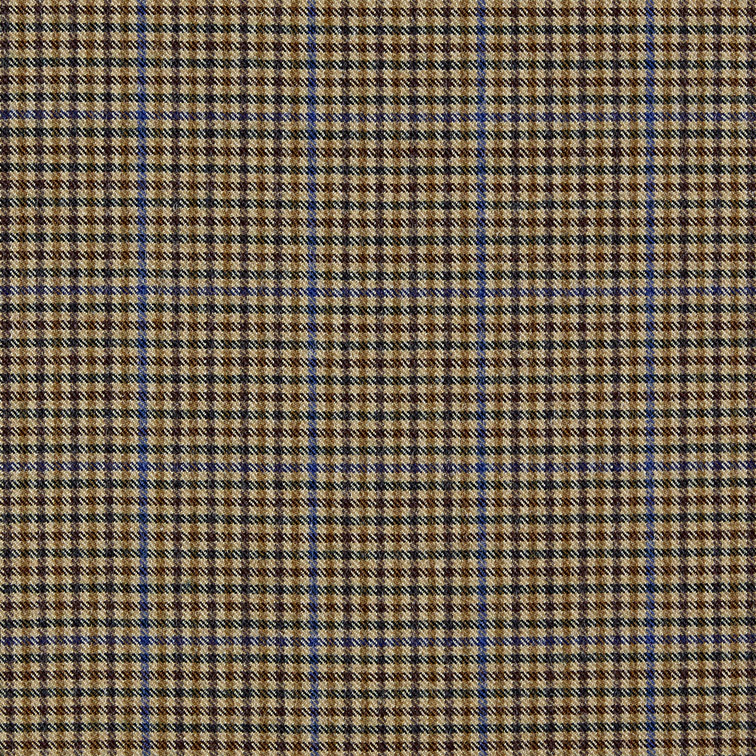 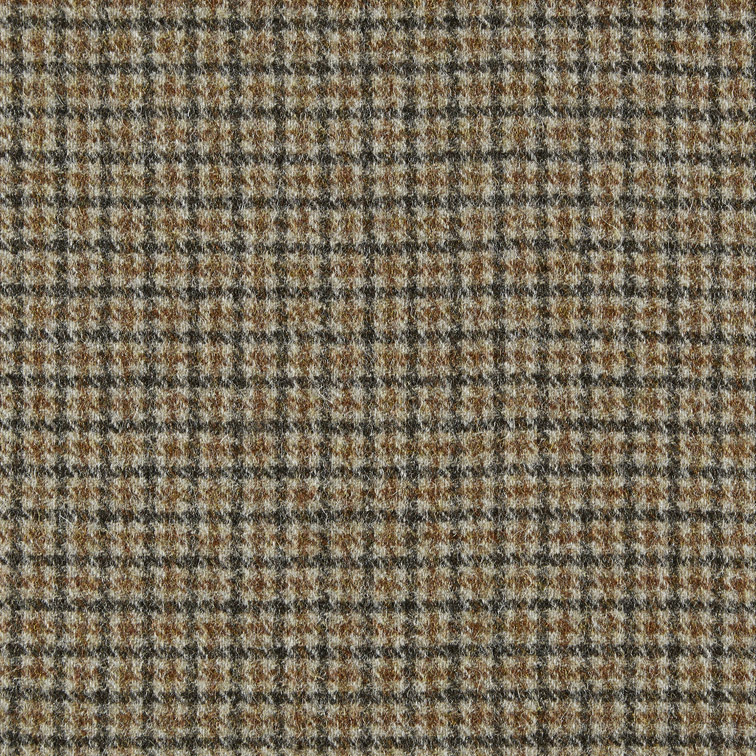 While there is no full agreement as to what came first - a gun club based on a shepherd's check (left) or a houndstooth (right) - and which one is the OG, the common knowledge is that they come from the north of Scotland. Most sources also claim that the name we know today was given to it already across the pond, in the late 19th century, when one of the shooting clubs on the east coast started using such a pattern. Apparently, the fine, multi-colored check was a pretty good camouflage - and maybe it was, however, we don't know exactly what the colors were and in what environment they were used.

Anyway, it is the same features that make the gun club check so useful today. 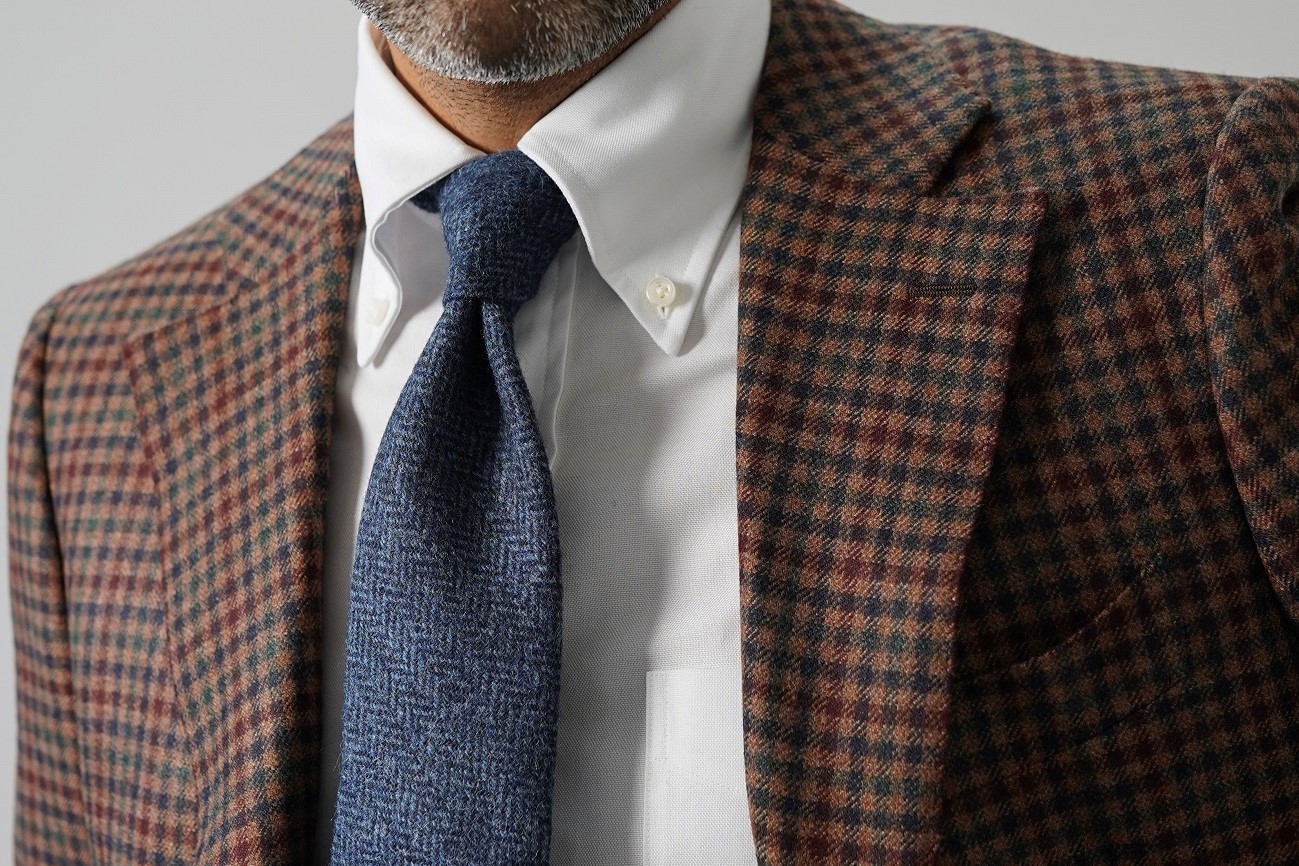 First, the fine scale of the pattern means that the base colors usually cannot be the dull browns or greens that are so characteristic of many tweeds. In order to ensure the right contrast, shades of beige (up to cream!), light brown or even warm gray are often used for the basic color of the check.

Secondly, above the background there is usually a thread in a stronger, more vivid color, from outside the earth's color palette - seemingly not matching it, but in practice joining it, refreshing and sharpening the entire pattern.

Thirdly, there are so many colors in total (very rhythmically, densely scattered) that… they seem to blend into one. How is that even possible? The variety in the pattern is so great that the different splashes of color neutralize each other - or if you prefer, there is a synergy effect. All of them together are easier to match than each one individually, and the more of them, the greater the potential! 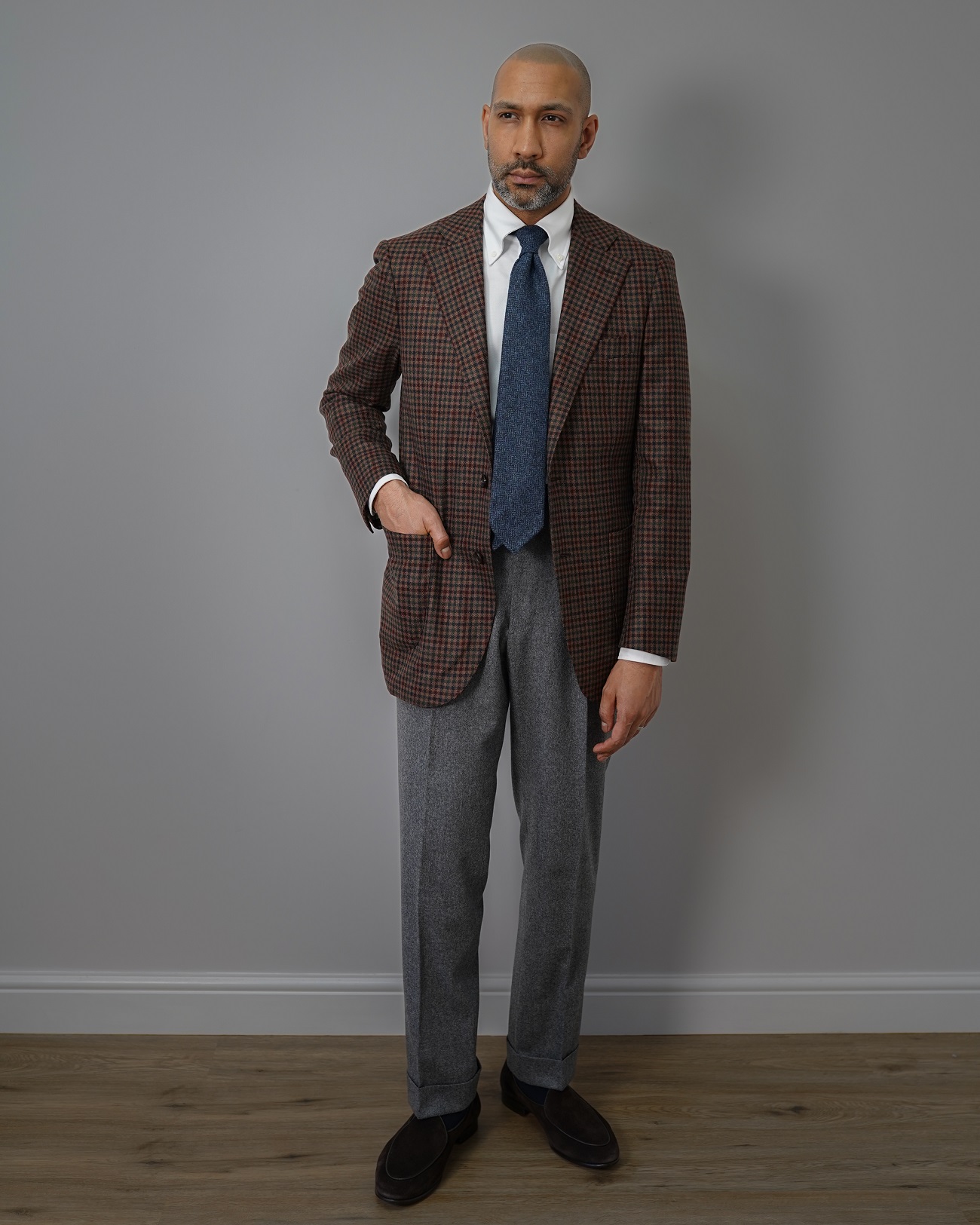 Thanks to these three fundamental features, the gun club check today fits at least as well in the urban jungle as it once did in the meadows and moors. And although as a traditional tweed it has its own charm (e.g. I personally like it a lot, even though my style is far from British), it can be even more versatile when it is a different cloth.

The mills seemingly realised that, introducing other fabrics woven in this pattern. First heavy worsteds, then cashmere and light, fuzzy flannels, finally some light high twists and linen mixes. Winter, all-season and summer versions. Sometimes in more traditional colors, sometimes completely revolutionized, based on, for example, shades of blue.

Well, the gun club check has become popular again in recent years, regained its position and there is no sign of it disappearing any time soon. And this year, such a proposal has again found its way to Poszetka's offer! 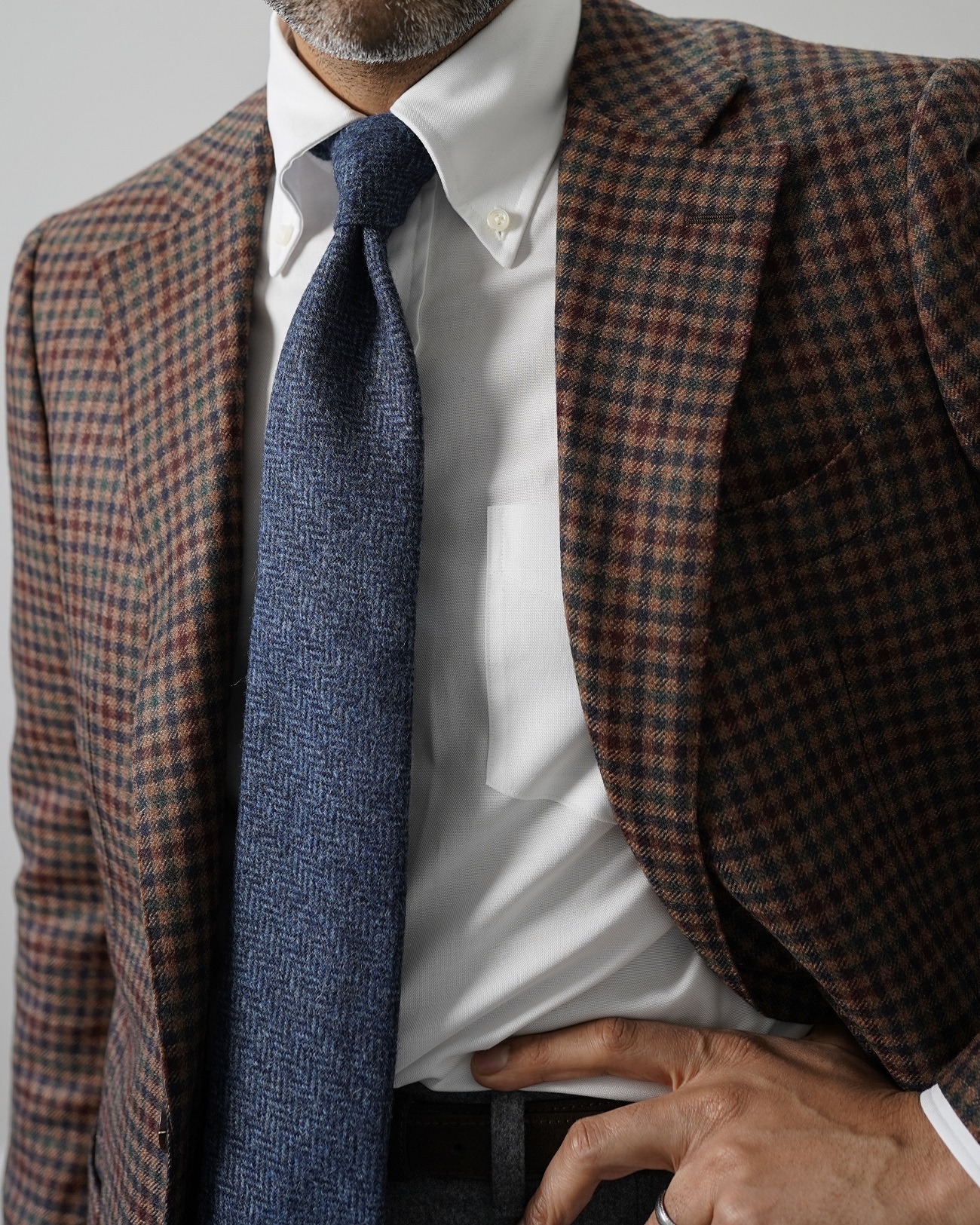 A perfect fabric was found and this is how the Loro Piana gun club jacket was born, which - I hope you agree - is just great. Important information: this is not tweed!

Although someone could argue whether this is a disadvantage, I will firmly answer that in this case it is for good. Even though I am a tweed fan, I am very happy that there is a jacket with such a pattern, but made of a different, slightly more civilized fabric available. This is still a solid British wool, but softer to the touch, lighter and more suitable for wearing indoors. It is not that rough and “hairy”, being much more polite - but not overly so.

It will still work just as well with denim (both raw and washed) and heavy flannels, also good in looks with a sweater and no tie. The smoother texture of the fabric does not take away its versatility or casual combination possibilities, but allows it to be used even in business-appropriate outfits - with dark trousers, a poplin shirt and a tie. 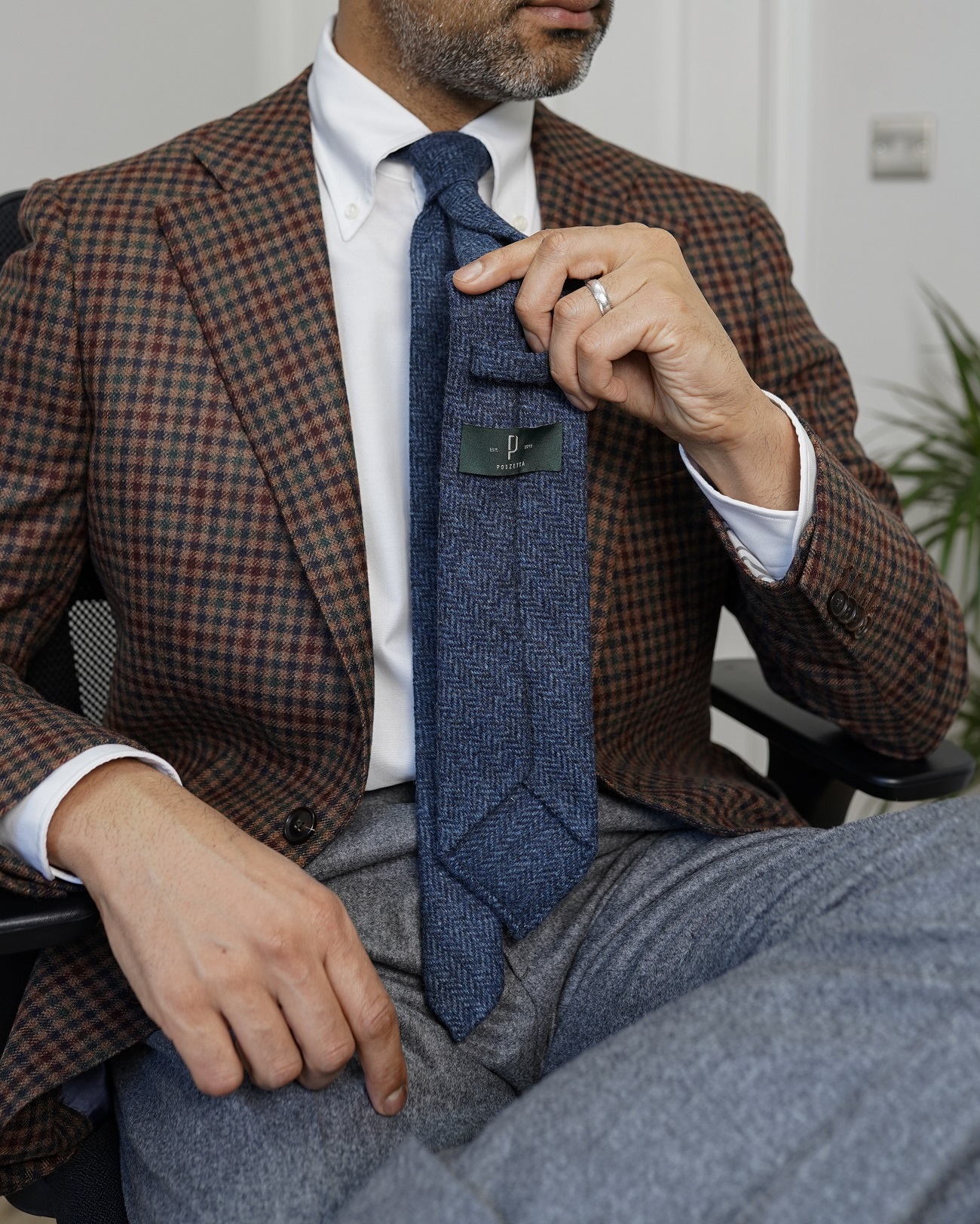 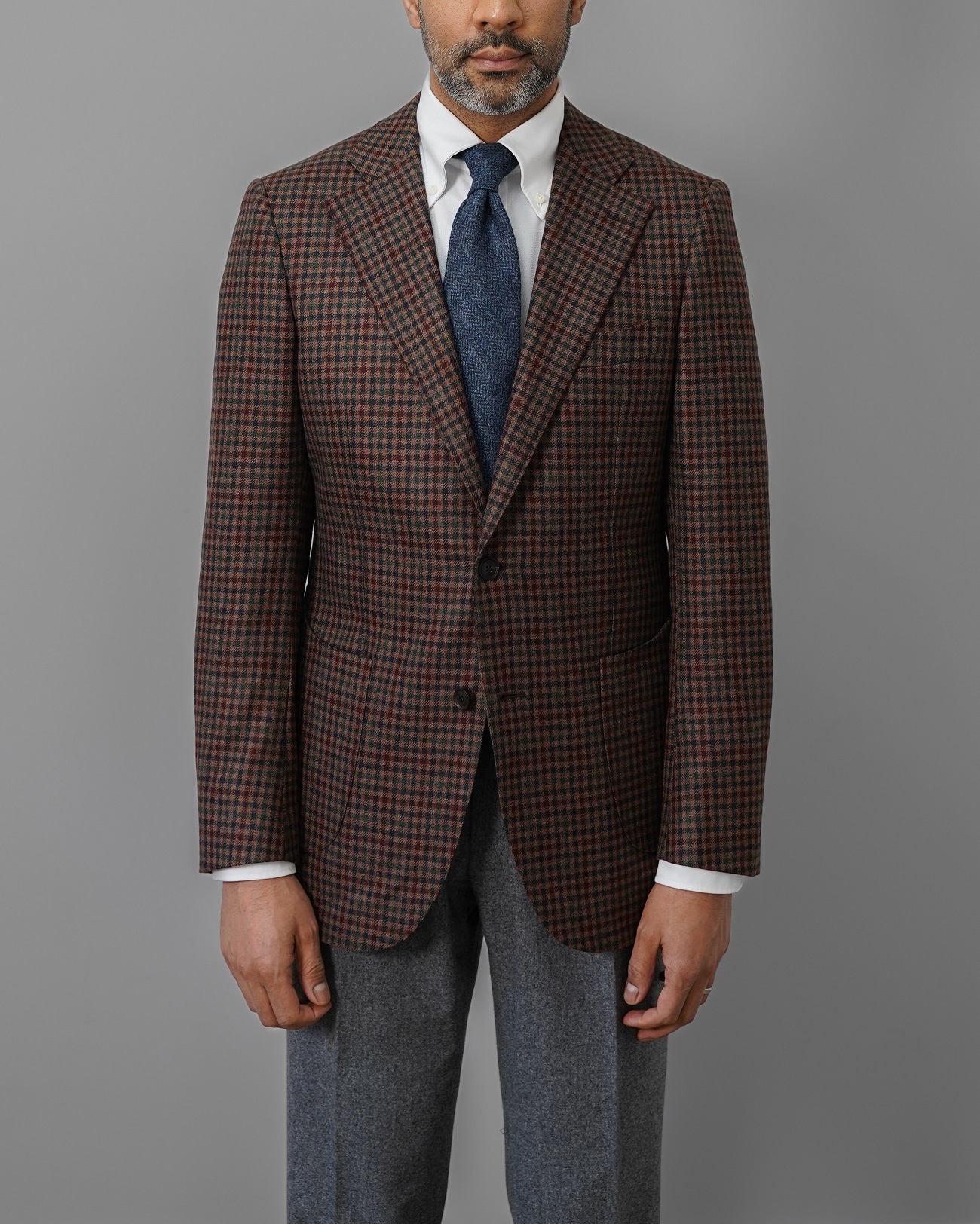 And what about the colors? Beige, navy blue and burgundy probably speak for themselves. There are few things that will not match the most popular colors of men's wardrobe.

Personally, I have many ideas on how to pair this jacket. I would wear it with a striped OCBD shirt and a knit tie, with a cowboy shirt and jeans, over a thick turtleneck in a dark shade of navy blue… What more can I say, the options are endless - try it!