Summer is almost gone and so is our month-long vacation from the Everyday Classic blog! We are back with the topic, just in time for these cold & rainy days that found us. Have a read.

M43, M51, M65… these should not be mysterious codenames for anyone who is only a bit interested in men's clothing - even if only the so-called classic menswear. The combination of the letter M and a double-digit number (referring to the year) has long become a synonym for a military jacket... 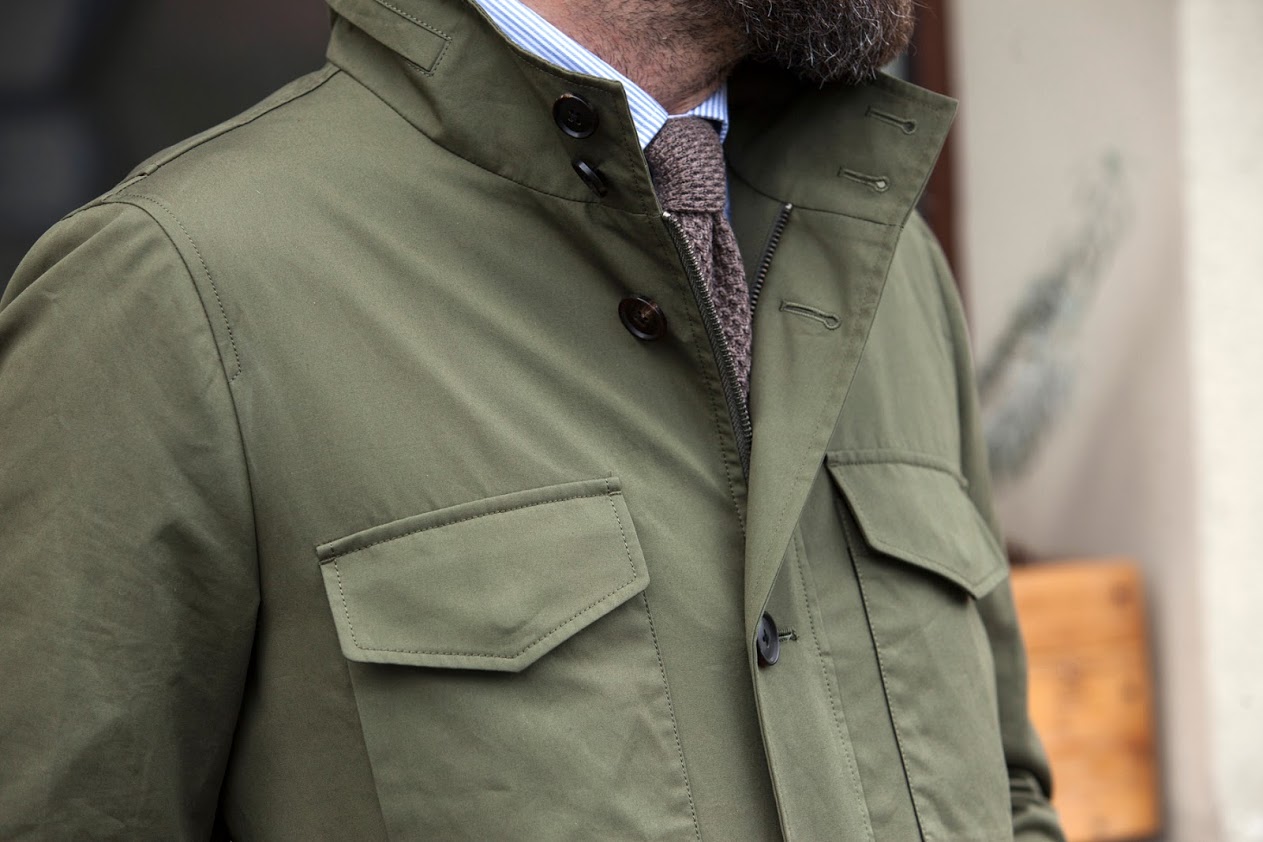 ... that is, nowadays, virtually every olive jacket, which at least slightly refers to any of the classic US Army cuts. They are everywhere - in movies, on the streets, in stores, on Instagram. From real, vintage jackets, through their replicas produced by companies specialized in clothing for fans of military/ASG/fishing, cheap and poorly made fast fashion items, to some more sensible, sartorial proposals.

Okay, stop - maybe it's worth getting this stream of consciousness in order and channel it in the right direction before we drift away too far. It just happens that it is again the topic of "clothing deeply rooted in culture" (which I have already discussed several times here on Everyday Classic), clothing that "you can do more with", is a "true classic" etc. Contrary to what you may think, it is actually harder to write about and requires a slightly different perspective. After all, there are already lots of articles on the Internet about the history of individual models of the military jacket (especially the M65), lists of famous people/movie characters who wore them and inspirational photos. It's hard to say something that hasn't been said yet - but you can still gather the most important knowledge, condense it in an accessible way, and spice it up with a meaningful conclusion that will make sense to readers interested in a specific topic. This is what I will be trying to do here - let’s begin!

The story is quite long, but relatively simple. We can assume that the garment in the form we know today was created in 1943. That is when, for the first time, a relatively long (covering the buttocks) uniform jacket in a characteristic olive shade of green (although OG107, the most famous one, appeared 10 years later), with 4 large, functional pockets on the front, a drawstring at the waist, with epaulets and pleated, freedom-of-movement-enhancing back was issued to the US Army soldiers. 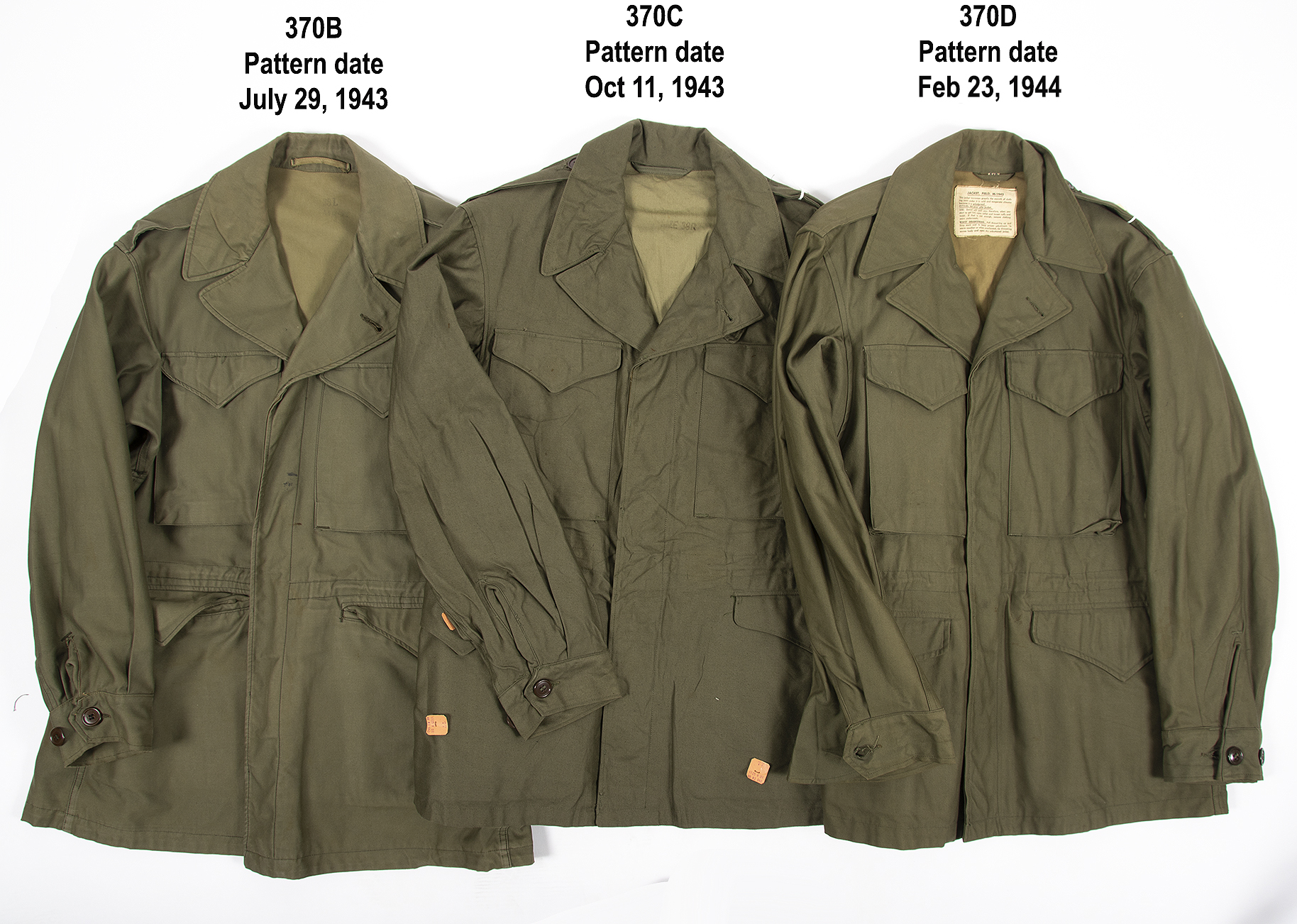 The Korean War, in turn, brought the separation of the jacket from the base uniform - it was no longer an integral part of it but an outer garment. The M51 pattern appeared: the buttons were replaced with snap fasteners, optional cold weather liner appeared and the collar became smaller. Even years after the successor was introduced, this jacket was eagerly used by soldiers who appreciated its sharper appearance (especially when starched).

The infamous Vietnam War resulted not only in a pointless death of hundreds of thousands human beings and the embarassing loss of the United States, but also created some of the most famous military garments we know - including the ultimate classic military jacket, M65. The turndown collar has been replaced by a stand-up collar, the hood has now become built-in and could be rolled-up into the neck part, modern Velcro fasteners have appeared instead of the buttons at the sleeves’ end. The jacket, produced not only in the OG107 shade (discontinued in the 80's), but also in several camouflage patterns, was issued in its final form until 2019, despite multiple uniform changes in the meantime.

Each of the aforementioned jackets not only became a model uniform for armed forces other than the US Army (similar jackets were and are used all over the world), but also gained popularity among the civilians. First by veterans returning home (and mind you, there were almost 3 million of them after the Vietnam War alone), then through the army surplus stores and finally through the civilian production, not as G.I. anymore (government issue, the so-called contract clothes), but still often made by the same companies - e.g. the famous Alpha Industries. 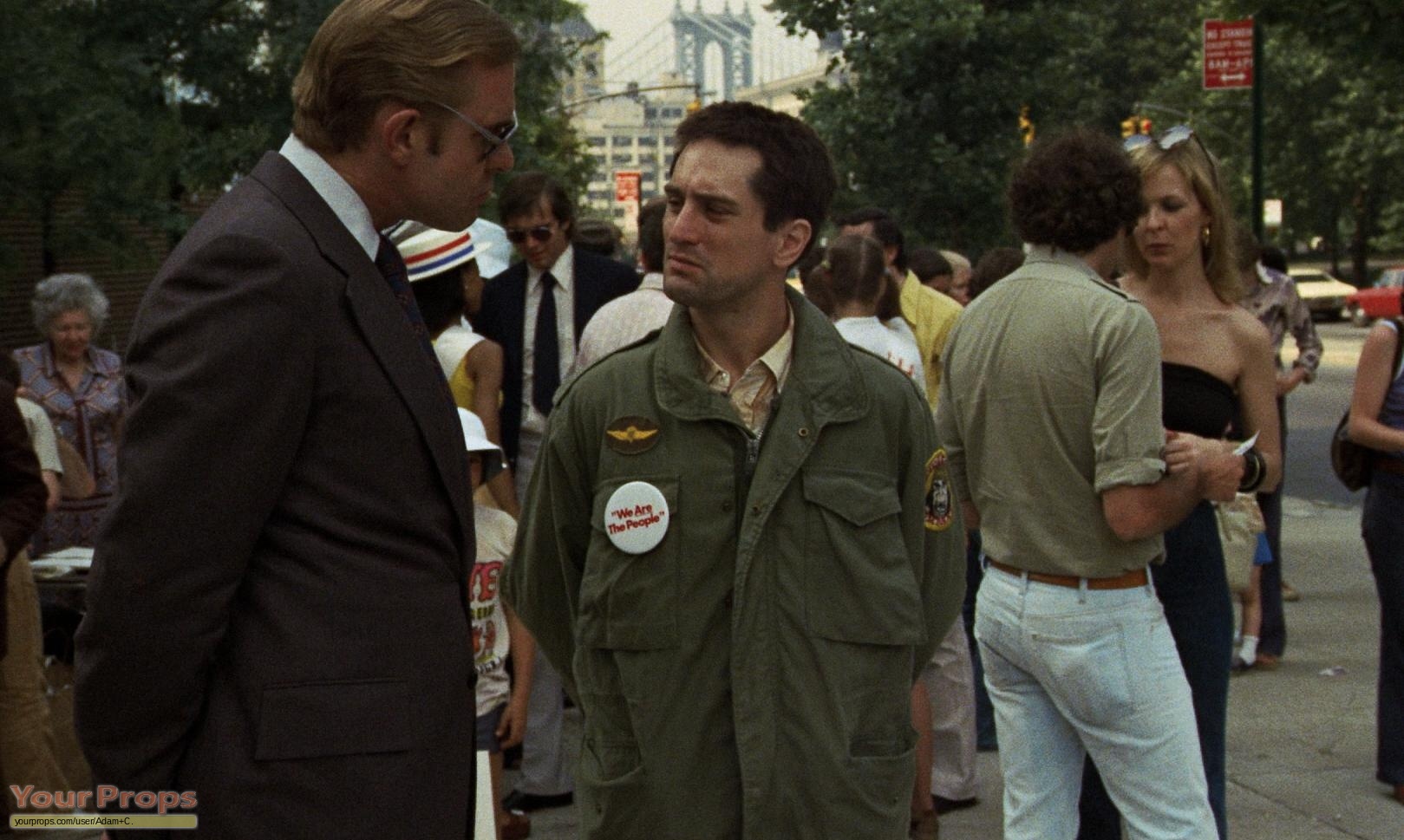 To paraphrase a polish saying, cheap military clothes were good because they were good and cheap. Sounds cliche? But it was true. The jackets made according to the US Army standards were functional, durable and comfortable (you could call them the techwear of the times), and their oversupply meant that they could be bought for next to nothing almost everywhere. Later, the cult element followed - while many movie characters (including my favorite Travis Bickle in the Taxi Driver) still wore this jacket for the original reason, as the theme of the Vietnam War and its veterans was already deeply rooted in American culture, those inspired by them wanted to own it primarily because some tough guy in the movie wore it. And it kept being that way.

In Europe, especially on our (east) side of the Iron Curtain, there was also an element of Americanness - after all, it was an imported garment from the USA, a cult object! Here it didn't matter at all that it was some jacket from some war - no no, it was a jacket worn by macho, manly men, those solving problems and puzzles. Just look at Lieutenant Borewicz (some say he is a Polish James Bond) and Bogusław Wołoszański (historian and journalist, particularly interested in mysterious stories regarding World War II). 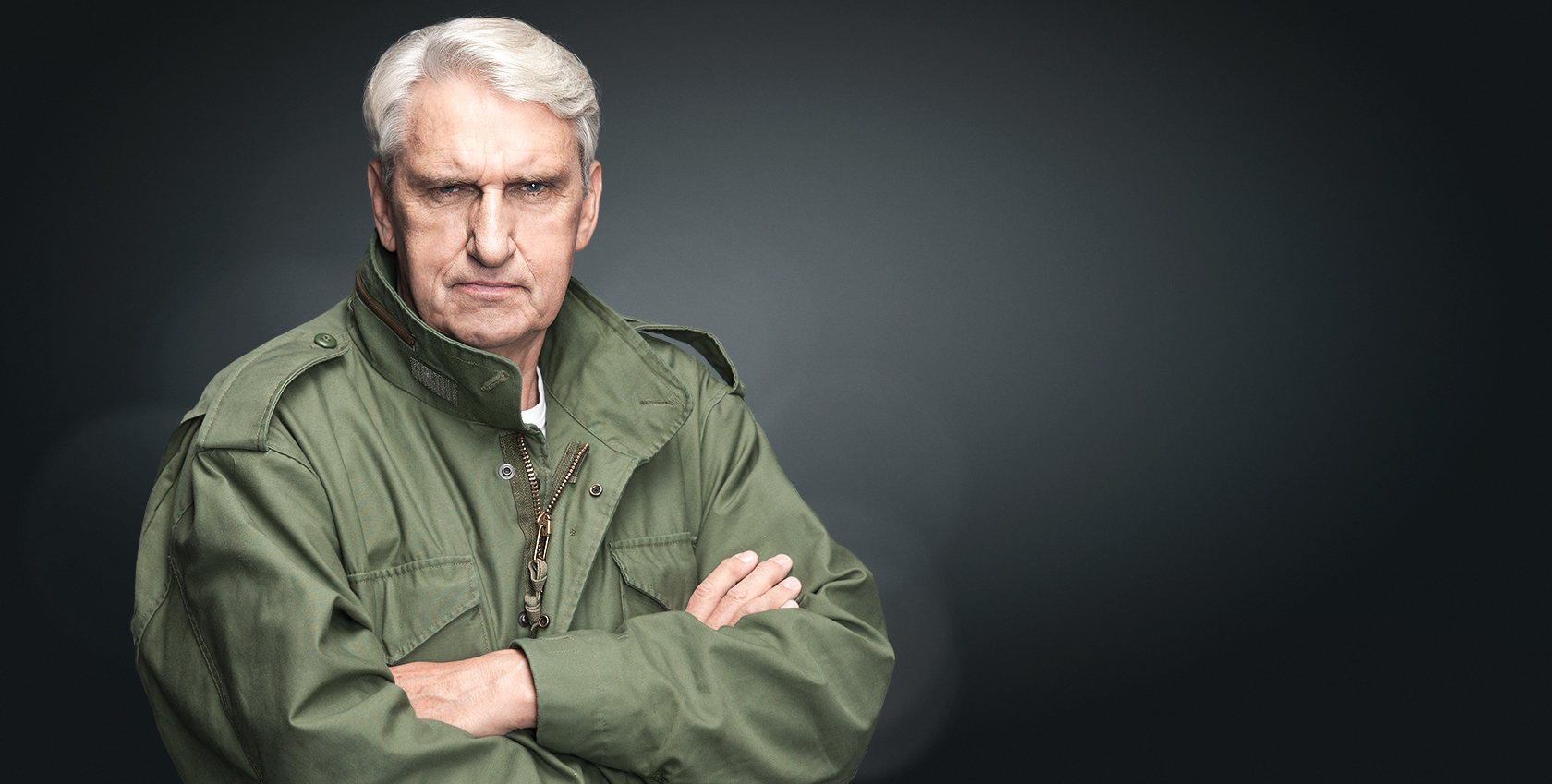 It was thanks to both its commonness and the growing cult that M65 suddenly became so universal - its owners wore it with everything, not always in an aesthetically thoughtful way, often simply out of habit, laziness or financial situation (USA), alternatively out of sincere affection and the will to show off (Eastern Europe). Today, no one is surprised by the combination with a jacket, tie or even a whole suit - we've seen it on the streets, on the screen and in the magazines. That's just how it is.

However, I believe that this element of being rooted in culture is not solely responsible for the present position of the military jacket in the fashion world.

As a frequent user of already a few classic pieces of US Army clothing, I put forward a thesis that these clothes* go well with just about everything, because… they do not actually match anything.

*But note: stick to those made up until the late 1970s, more modern are too technical or futuristic, often made from weird synthetical fabrics designed for a battlefield. 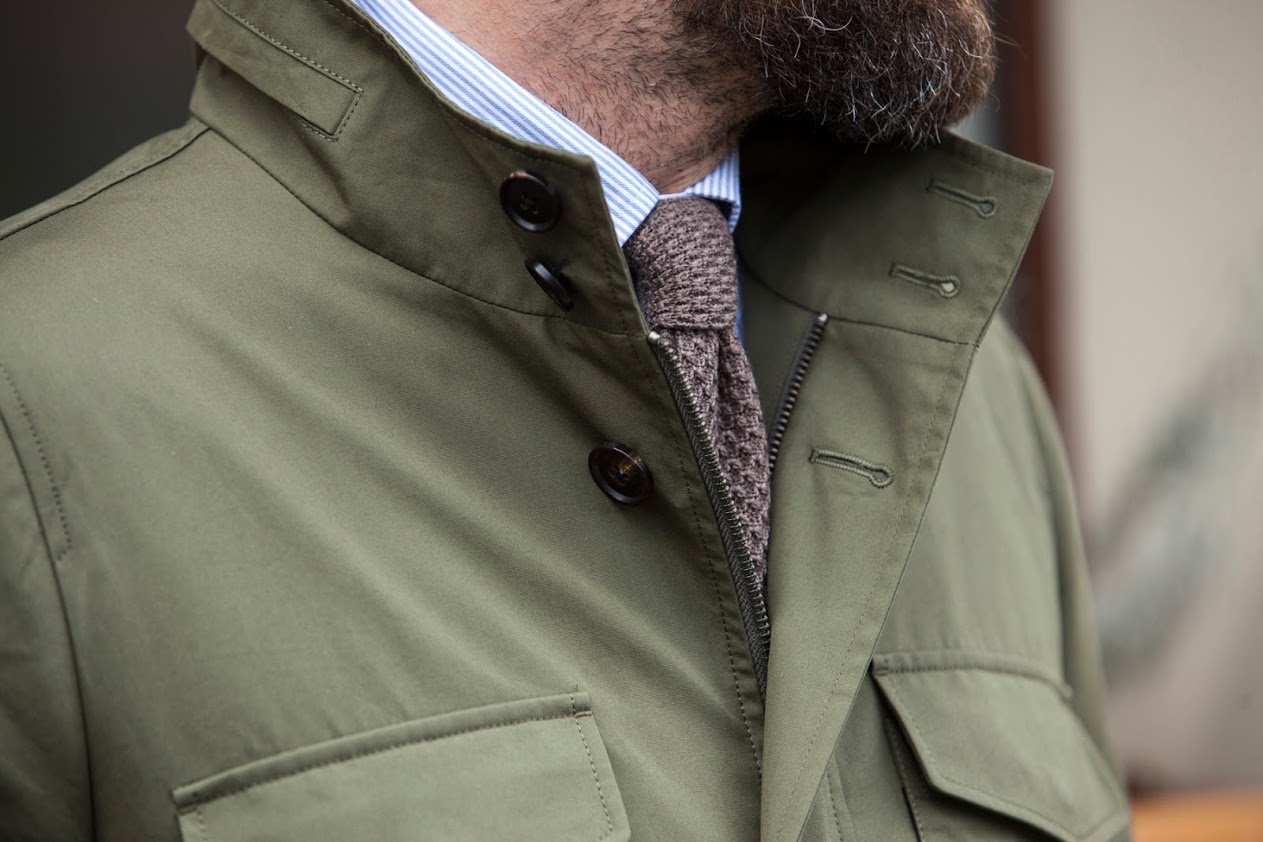 They were not designed as fashionable, civilian clothes. They were purely subordinated to function, the aesthetics were secondary. Nobody thought about combining them with other cuts or colors - they were supposed to be only a part of the equipment, usually made of (almost) the same fabric, in the same pattern and color.

These practical cuts, combined with olive green or simple camouflage (eg ERDL), cannot be thought of as normal clothes. We cannot detach these features from the military roots - but thanks to the fact that such clothes deviate completely from the established standards of a classic menswear, we have more freedom in combining them. And that's why they are versatile as hell.

Simply put: the OG107 shade fits so many colors not so much because of its positioning on the color wheel, but because it stands out from the popular ones (navy blue, gray, brown, shades of burgundy) and creates a sufficient contrast . The M65 suits clothes of such varying degrees of formality because it is not a casualised, informal version of a classic coat, but a new jacket cut that has no classic counterpart - and it has become a canon itself. 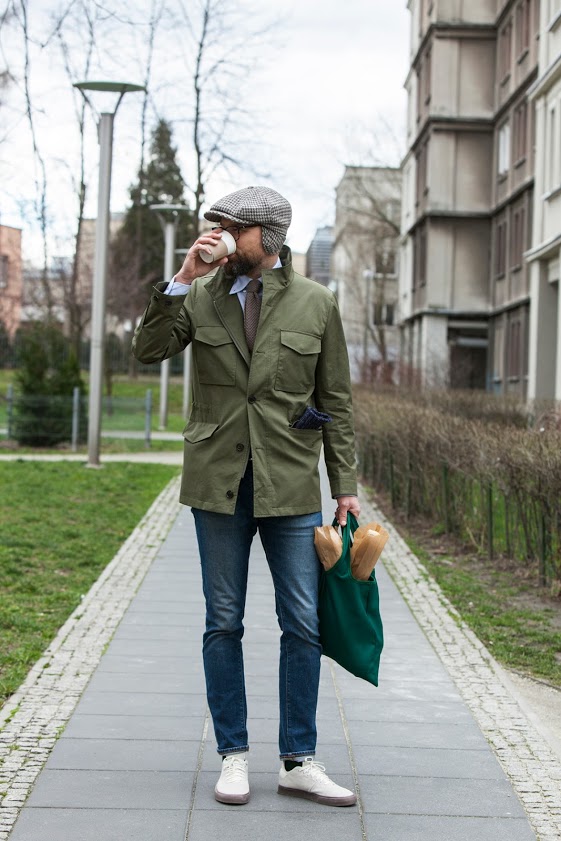 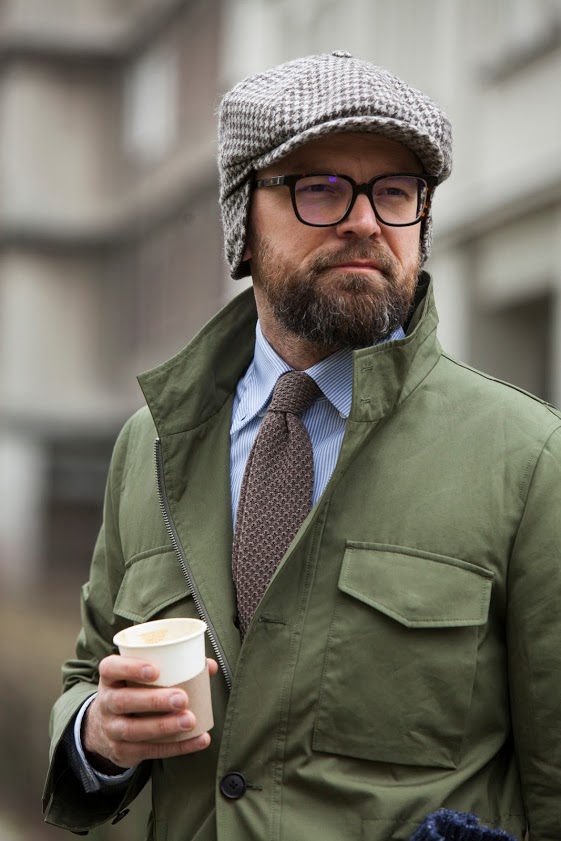 All right - we already understand where does this versatility, popularity and cult character of the military jacket come from. Now it’s time for the bad news: it's getting harder and harder to get the OG.

Unless we are talking about the M65, it is not that bad - you can buy one of these, used in good condition, without any problems. Depending on the size, deadstock ones are also sometimes available. When it comes to the M43 and M51, it is much worse - the prices have reached such a level that they are collector's items rather than useful jackets that you can just wear and enjoy.

Thanks to this and the recent kind-of-fashion for military clothing in the #menswear circles, there has been a special need - probably for the first time ever - to make jackets better than the original. 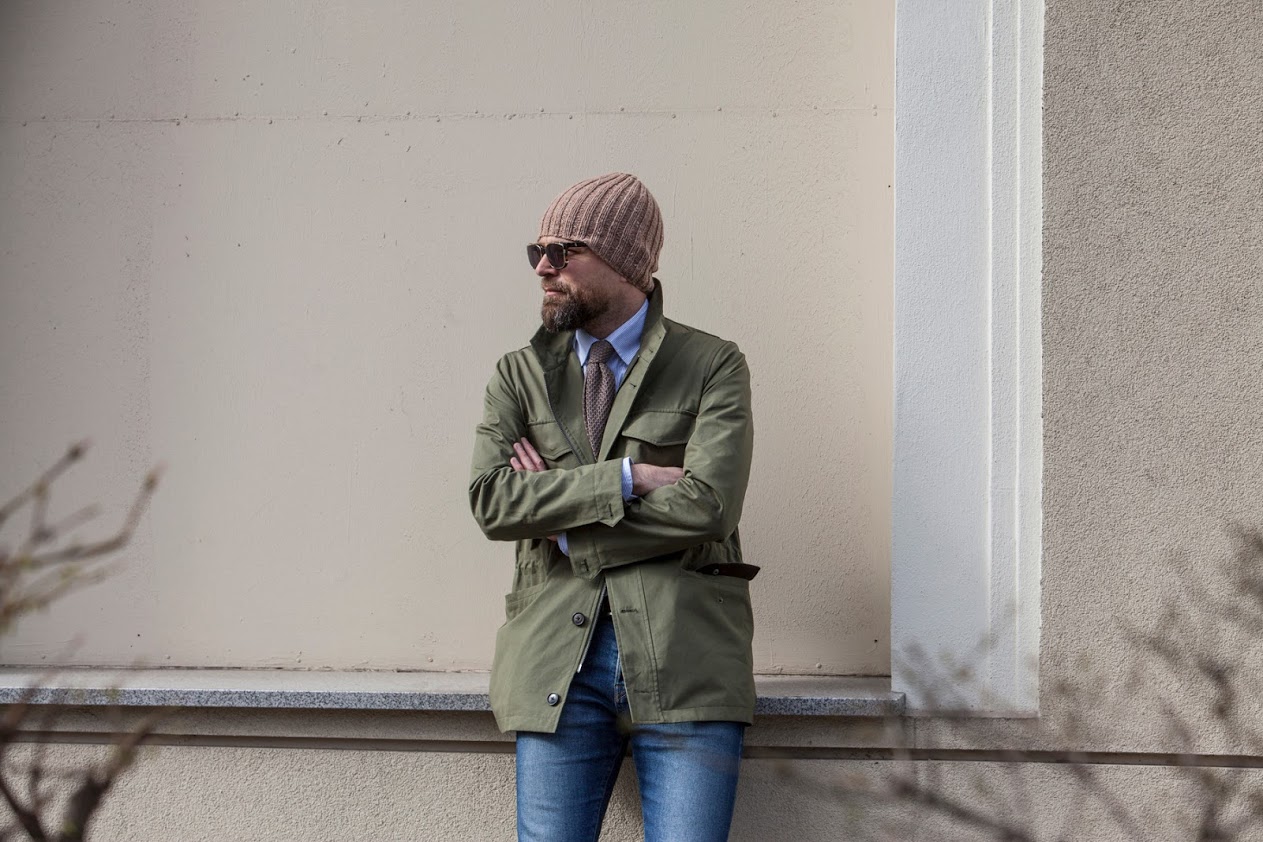 Military-but-civil jackets entered the market - slim-fitting, lighter, without epaulets, made of more expensive fabrics, with modern technologies (membranes, etc.), made and finished more like tailoring. It turns out that there is a niche that needs to be filled not by clothes for fishermen and home-grown military enthusiasts, but for people who are interested in more elegant, classic garments. It is worth taking a closer look at this issue.

The point is not that every brand should offer such thing, a military jacket. One should not just mindlessly copy well-known patterns and sell what everyone else does; what the market is full of. The trick is to interpret the classics in one’s own way (preserving the spirit!) and make it a part of the proposed look, naturally.

I think Poszetka did it quite well this year. The Field Jacket naturally compliments the brand's offering, continuing the trend started last year by the Safari Jacket, but taking a step further towards casual outerwear - not being just a jacket replacement, but something rather complementary to it.

Is it both classic and modern? Absolutely! The model retains the most important features of the original: universal olive color, pleats that increase the range of movement, 4 spacious pockets with snap fasteners - but also adds a few elements straight from the world of tailoring: horn buttons (including cuffs), checked lining, neatly finished seams and generally more polished aesthetics. 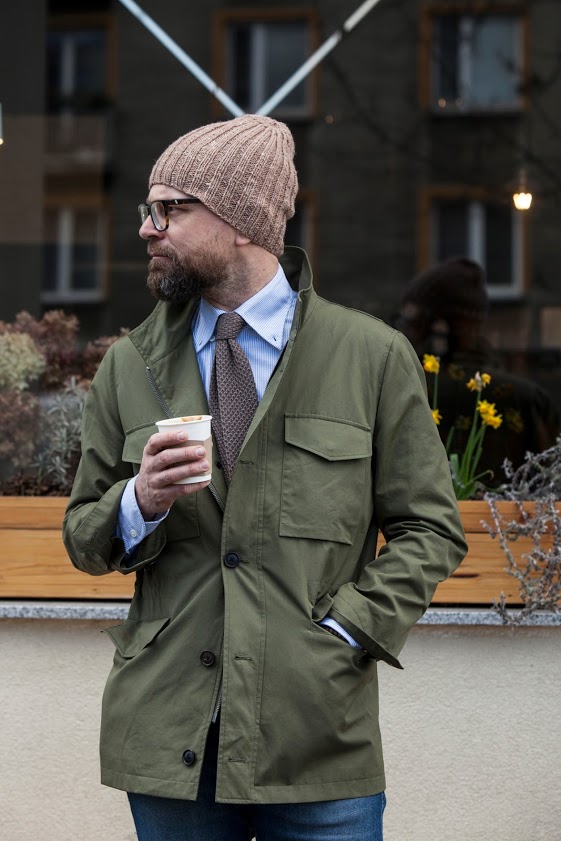 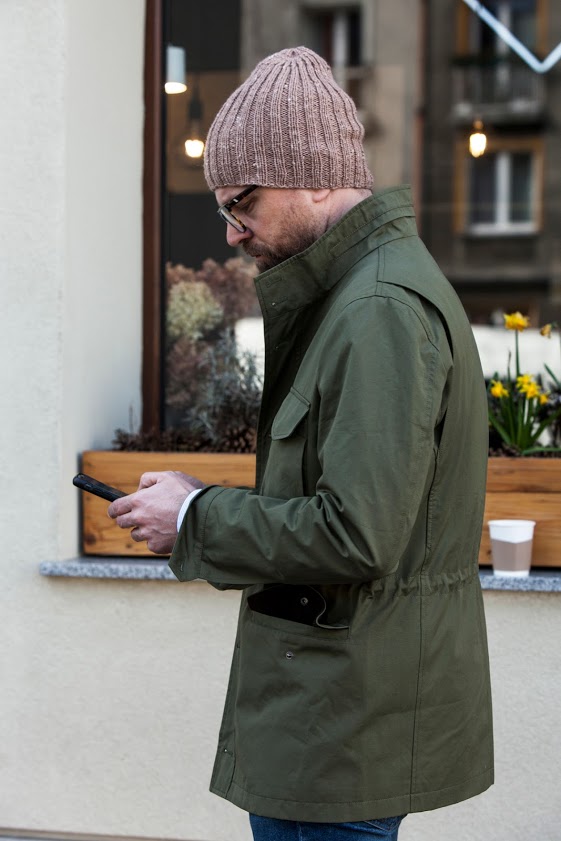 In my opinion, this is a really successful interpretation of a military jacket, the sartorial way. If you are wondering what kind of piece you need in your wardrobe for spring and fall, let me give you a hint - most likely this.

However, I will not say directly what to wear it with - the answer to this question should be obvious to you already.

4.89 / 5.00 3303 reviews
IdoSell Trusted Reviews
2022-11-21
Amazing
2022-11-19
Great service and fast shipping.
View all reviews (3303)
This page uses cookie files to provide its services in accordance to Cookies Usage Policy. You can determine conditions of storing or access to cookie files in your web browser.
Close