A lot of people hearing the term "tweed jacket" imagine a voluminous, old-fashioned piece of clothing, in an indefinite, earthy color, worn down, spotting patches on the elbows. .

Today, this is no longer true - teachers, professors and academicians are no longer associated with stereotypical tweeds, only few elderly gentlemen are still wearing some decades-old pieces from their wardrobes, till they fall apart. This thick fabric from Scotland (well, not only), however, is modernizing and experiencing a real renaissance in the circles of men's fashion enthusiasts.

Italians change the game a bit by introducing various fabrics with names such as soft tweed, dream tweed, summer tweed and the like. All of them are generally much softer and usually lighter alternatives to a traditional tweed. However, apart from the name, the only common thing they share is a richness of texture and/or characteristic colorful yarn mix - in practice, not a lot of similarities. 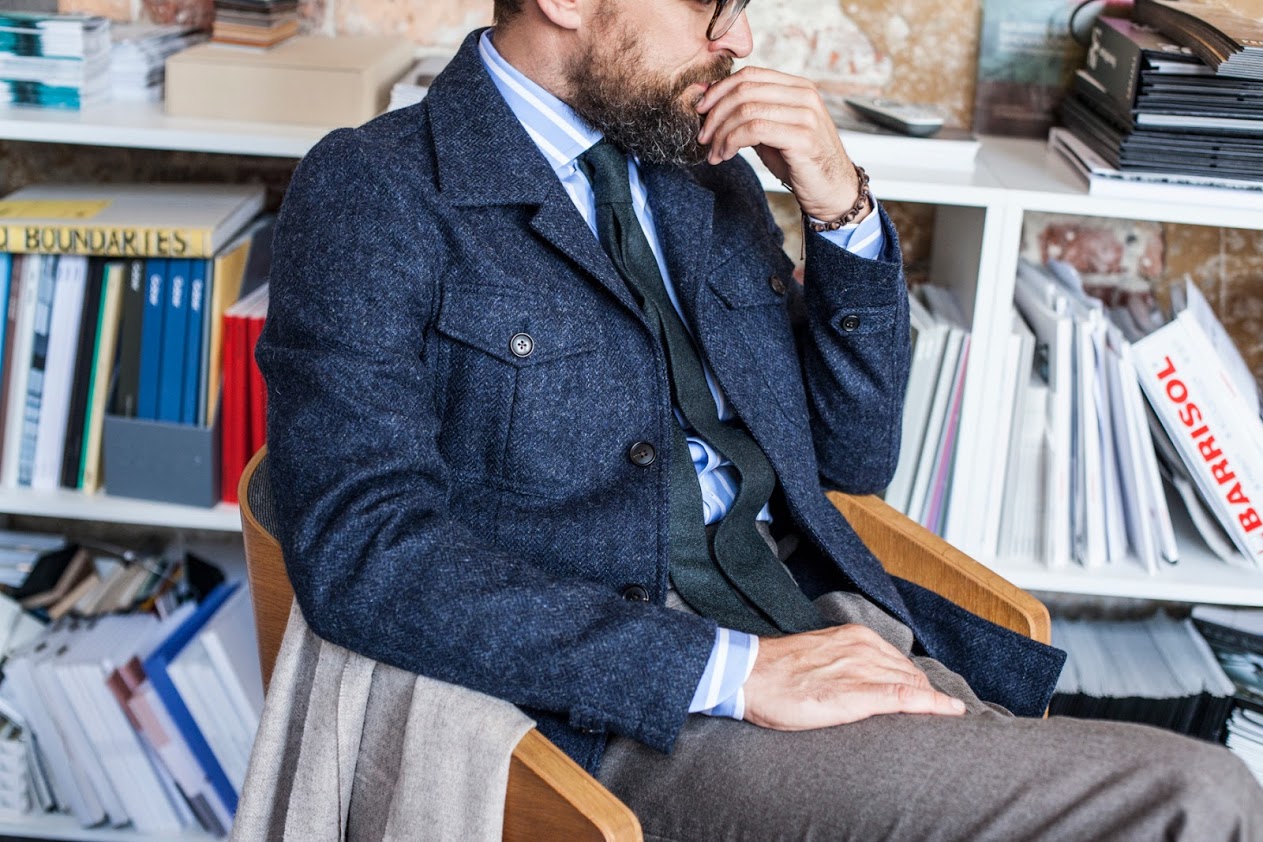 However, today even those quite traditional tweed producers offer fabrics that are definitely more accesible (in terms of both softness and looks) for the average user than before - they reduce cloth weight, use softer yarns and add vivid colors to the offer. For example, one of the most famous British weaving mills, Abraham Moon and Sons, offers fabrics in virtually all colors of the rainbow! In their 4 classic tweed fabric books (classic shetland and softer lambswool), which are constantly available, next to countless greens and browns you fill find more unusual shades such as aggressive pink, vivid orange or turquoise, not to mention the wide range of urban, city-esque colors, such as navy blue available in various shades.

Tweed adapted to modern times, so it became fashionable again. One must admit that its texture is something that cannot be easily mistaken- the characteristic appearance of a rough fabric composed of many yarns of different colors, blending together into one (fairly) uniform shade, cannot be imitated by a delicate worsted wool. The sheer weight of this fabric (even in today's lighter version) and its hand are something uncomparable to these modern light Super S Italian wools. Even those initially skeptical will quickly find out that solid weight and drape are huge advantages that usually contribute to the pleasure of wearing. 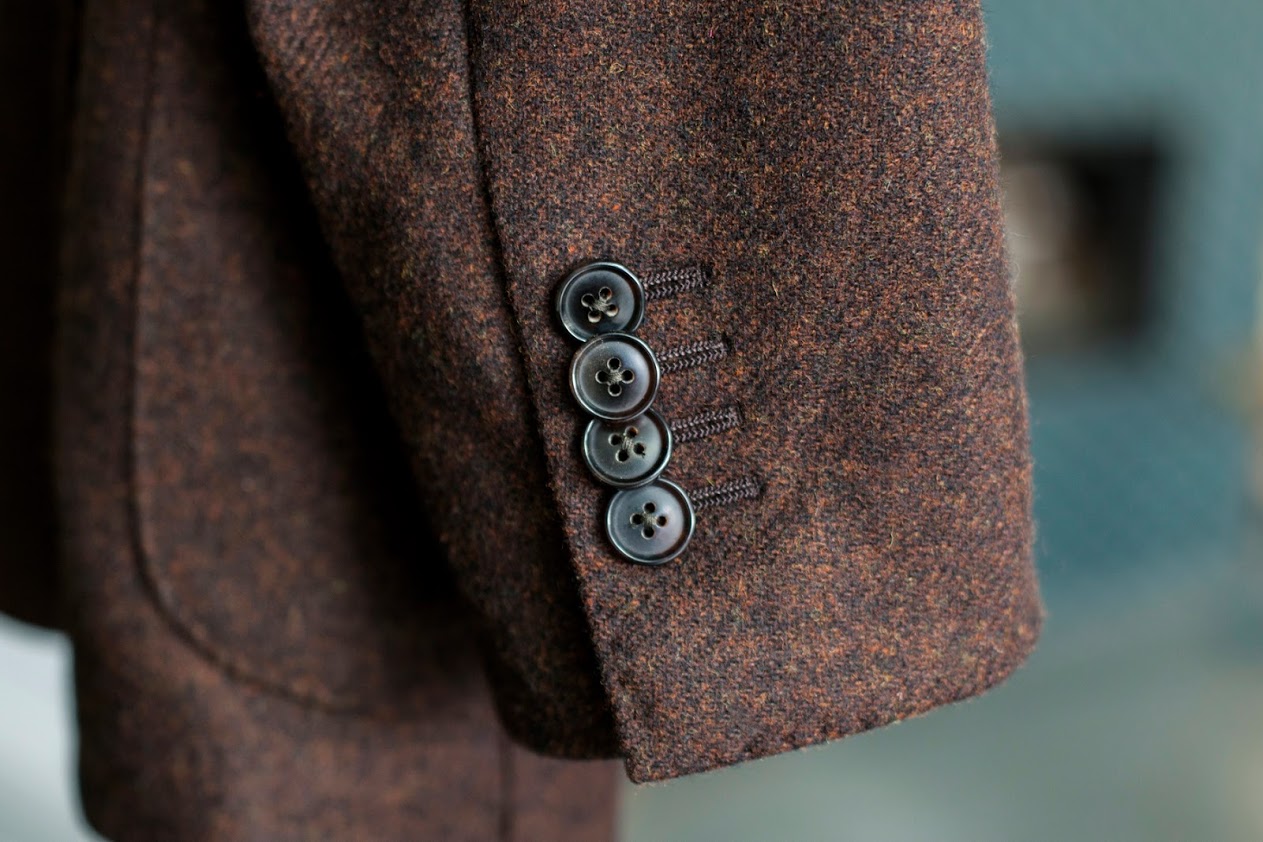 Well, talking about weight and drape - a lot of tweed jackets available today (including, of course, those with the Poszetka tag) are made from fabrics with a weight that is kind of sweet spot for winter tailoring. Around 320-380 grams/metre is perfect for a jacket is at the same time warm, but comfortable and well-fitting, thanks to the proper drape. Lighter cloths are less durable, prone to creasing and just look worse, heavier ones are usually impractical, too warm, too heavy and stiff. 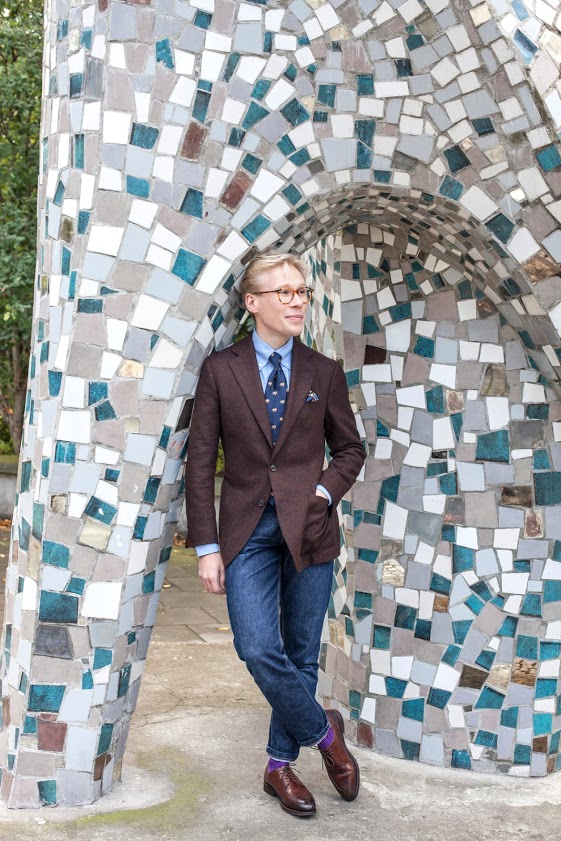 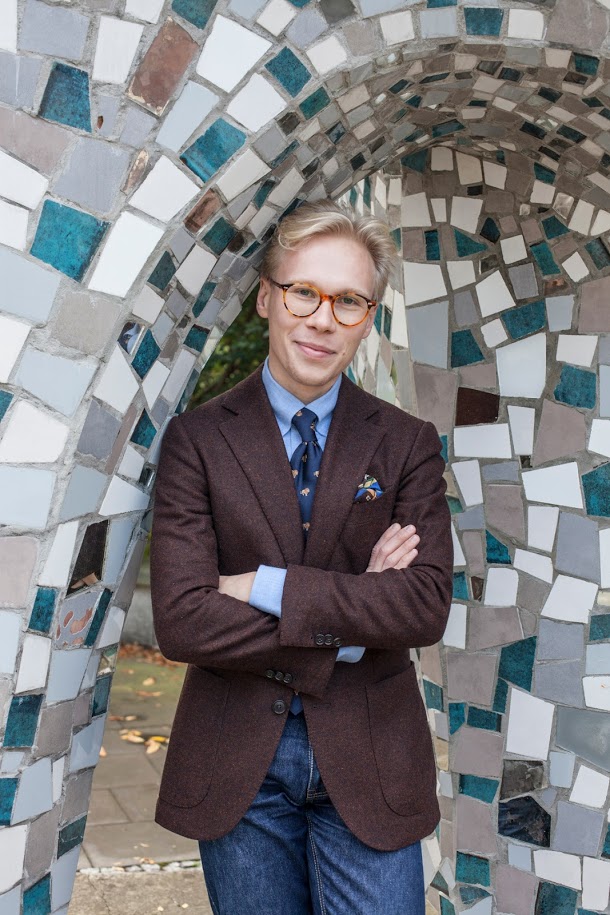 However, there is one more issue that might make the title of this article sound like an oxymoron to some people: jacket's cut.

Paradoxically, tweed's durability has led to the fact that it now seems old-fashioned, because it made so many archaic jackets survive to this day, many more than those made in other cloths. Luckily, all you need to do is to stay beware of most of those from the '70s,' 80s and '90s, those that in fact created the stereotype mentioned in the introduction. In their case, even a good fabric and attractive color will not make them modern and the final effect might be exactly what we want to avoid - the old-fashioned, "bad tweed jacket". 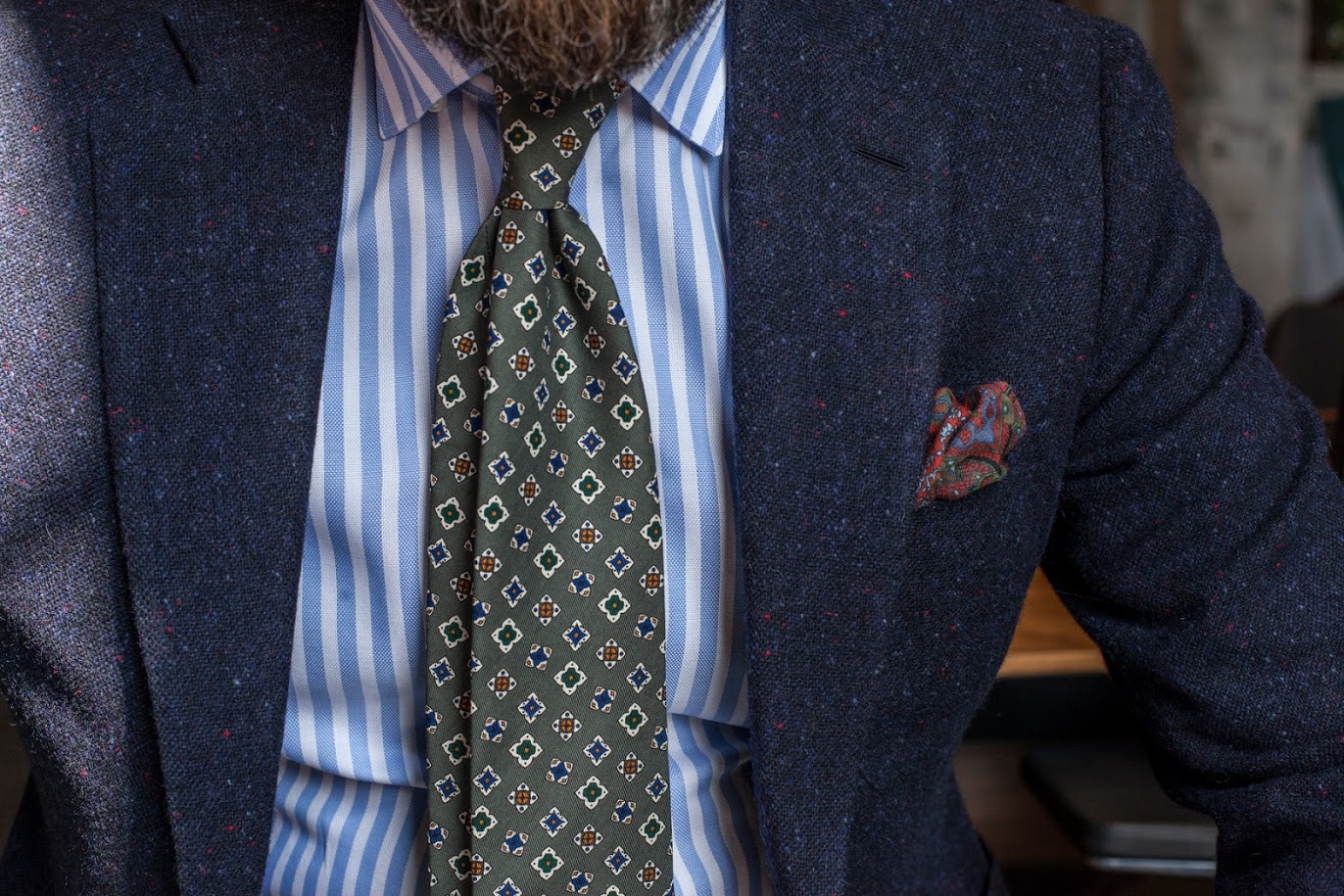 Well, a bad cut would spoil even the best fabric, no matter if it's tweed, cashmere or linen. Only the power of stereotypes, however, decided that it is the material discussed today that became associated with this not necessarily handsome tailoring from bygone times, so deciding to incorporate it into one's wardrobe may require a little more courage at first.

Nowadays, fortunately, most manufacturers cut their tweed jackets like all others. Buying new, it is not so easy to find archaic details like a really low and sloped gorge, wildly padded arms, giant leather buttons, complicated fastening systems and weird pockets. 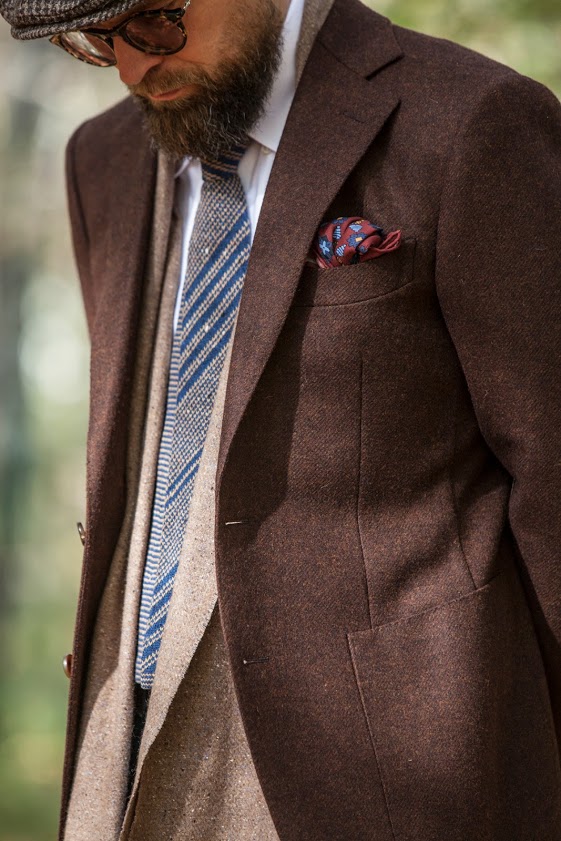 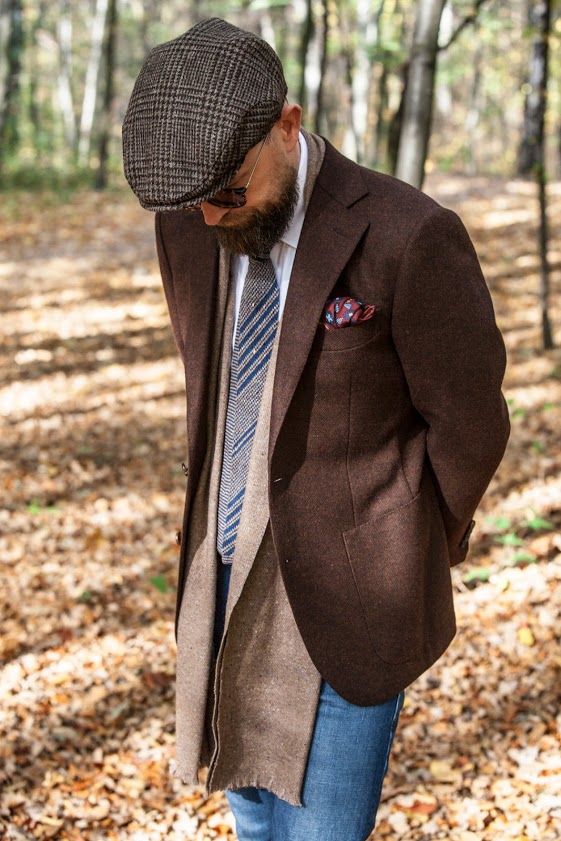 Ultimately, there is nothing to be afraid of and it is worth giving tweed a chance - it can be as modern as any other cloth. The fabric itself has changed, cuts of jackets also have moved forward. When deciding to add a first jacket like that into your wardrobe, we recommend choosing one in a fairly versatile color - e.g. classic navy blue with a slight texture variation (such as Donegal Tweed, which we have already written about), lively (to avoid association with "old-manish" jackets) shade of brown, herringbone or houndstooth gray or light beige, obviously in a fairly modern (or timeless) cut. We guarantee you that it may easily become your favourite winter jacket!