A navy blazer is perceived as the most versatile and easiest to pair sportcoat a man can own. However, during the autumn/winter season it has a serious competitor...

Brown is an extremely charming, but often underestimated color. It is widely considered as old-fashioned, grandpa-style or non-flattering. Well, we disagree couldn’t disagree more.

The stereotypes are tied to the origin - earth tones have always been related to clothes that were rather country  than city , the brown jacket itself comes straight from the british country  style. However, as with many things - even with the raglan coat we wrote about recently - time has allowed the cultural context to blur, and rules such as no brown in town  have long lost their original meaning. 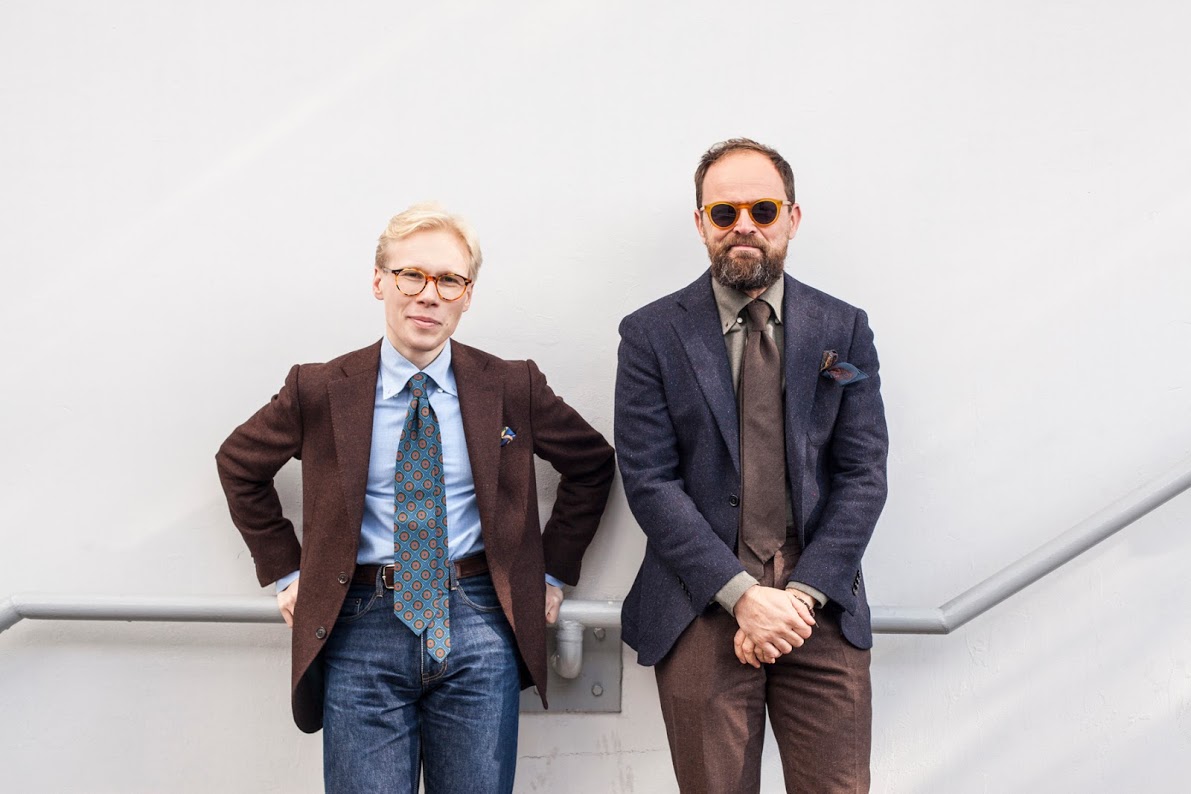 So, brown jackets ended up in cities, on the streets and in the offices, on the backs of fashion enthusiasts and businessmen. Sure, this color appears clearly less professional than dark navy, but in a calm, cooler shade - chocolate or unsaturated, almost grayish beige - will be practically just as suitable for most occasions. Work during the day, going out at night, worn as a light outerwear piece... Brown jacket will be truly versatile.

Although earth tones are not only reserved for the autumn-winter season - we will come back to this topic in the future - the brown jacket, however, is easiest to think of in the context of the cooler months. Aside from the color palette talk, there is a more pragmatic reason - cloth. 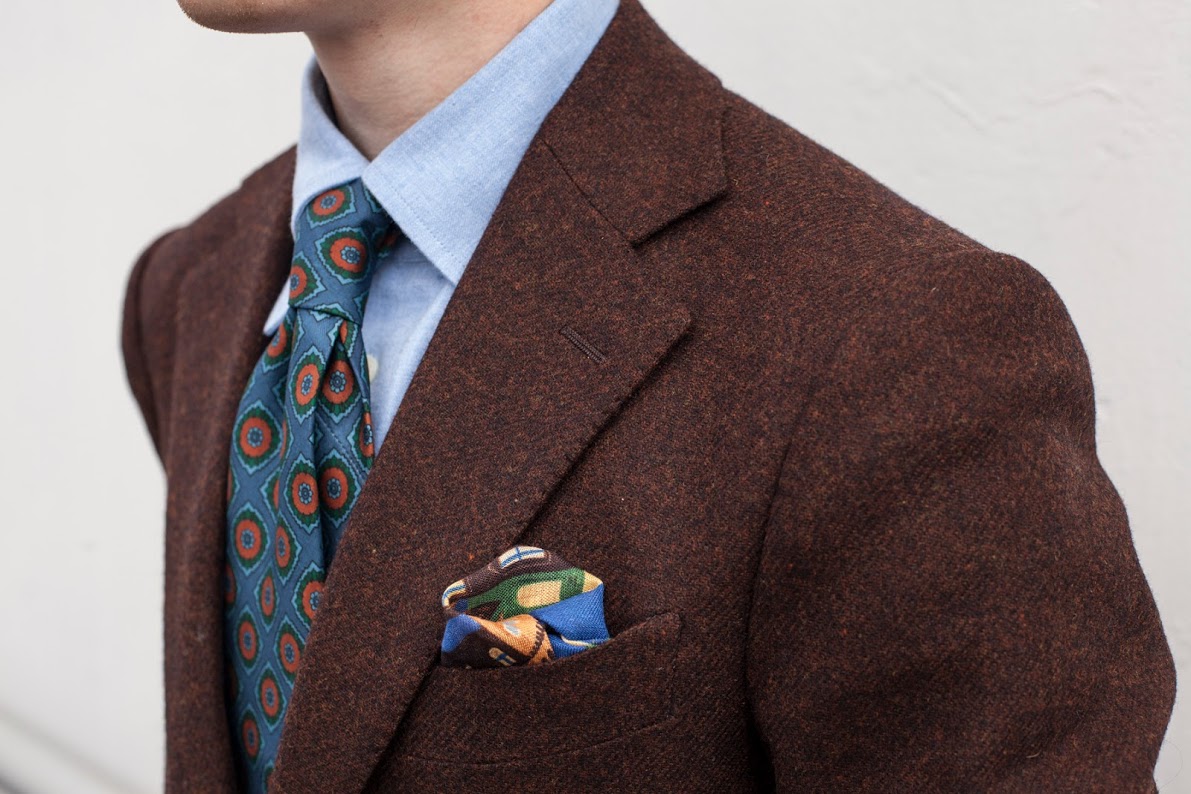 Despite many advantages, it's hard to call brown itself a distinctive color. Totally plain fabrics in this color can look sad and bland. Here you need more depth - a colorful melange, a mix of different shades merging into a rich, eye-catching texture and vibrant color. This can be achieved by small patterns or experimenting with the fabric’s structure, but there can also be a simpler solutions - you can bet on tweed, which has these properties as standard and, by the way, is a great fabric for cold months.

(It is worth adding that the texture of tweed is so characteristic and desirable that there are its thinner imitations that can be worn in the warmer months - the so-called summer tweed. We will come back to this topic when the next summer collection arrives.) 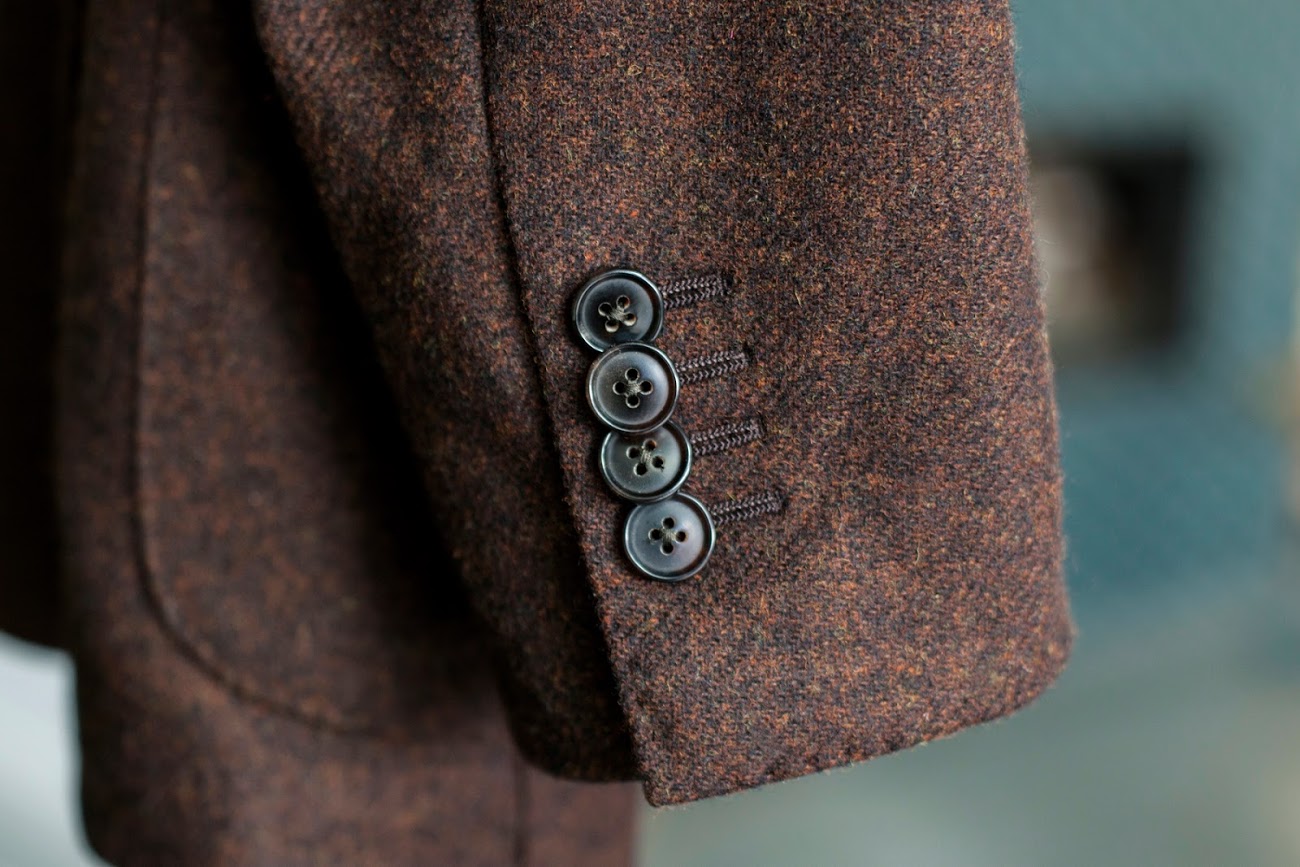 This current Poszetka’s collection features a sportcoat exactly like that, the one made of brown tweed which color can be described as dark chocolate flavored with cinnamon. Noble brown with rusty and gold flashes looks beautiful in the light, behaving like a chameleon - depending on what colors you combine it with, different notes will be picked up. It's a shade warm enough to be worn with other earth tones and cold enough to be worn with gray and dark navy; bright enough to combine with graphite pants and dark enough to match beige chino. And above all - characteristic enough to look modern, not old-fashioned. 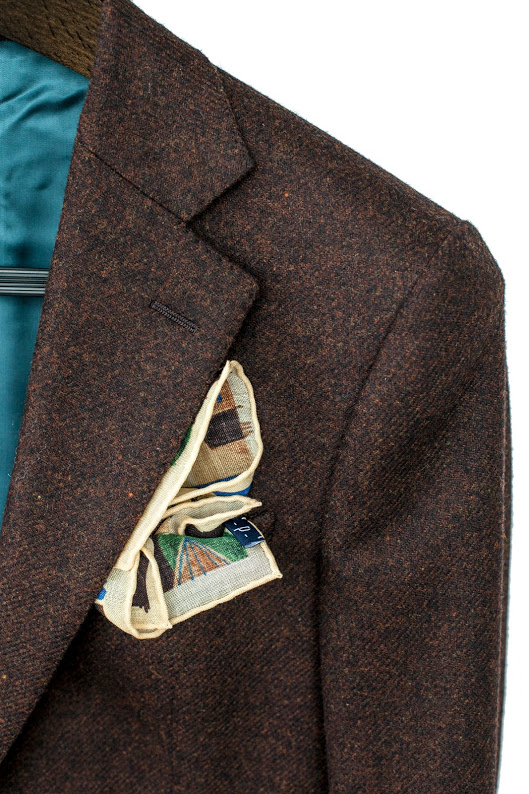 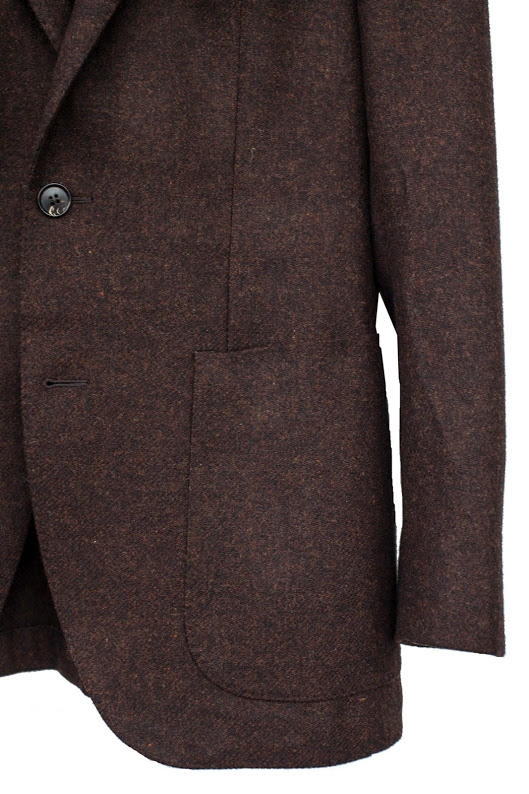 The cloth itself, though being the original british tweed from Abraham Moon & Sons, is surprisingly soft - because it's not a classic shetland, but a softer lambswool. Its structure is not so rough and tough, but warm and pleasant. This, combined with the lightweight canvas, soft shoulders and patch pockets, brings the jacket much closer to the Italian or Ivy League style than the british classics. It will look better with jeans and an oxford shirt than with cords and a tattersall checks (which doesn’t mean that they cannot be paired!). When it comes to gray flannel pants - well, this evergreen that cannot be limited within the boundaries of any specific aesthetics - together with brown tweed they will make up an equally iconic set as with a navy blazer. In general, we could go on listing other pieces that match brown tweed ...

...Perhaps almost as many, as for the navy blazer. However, we won’t be trying to do this, because we think that it is enough to mention only one thing - the brown tweed will look amazing with denim. Much better than any navy fabric. Convinced now? 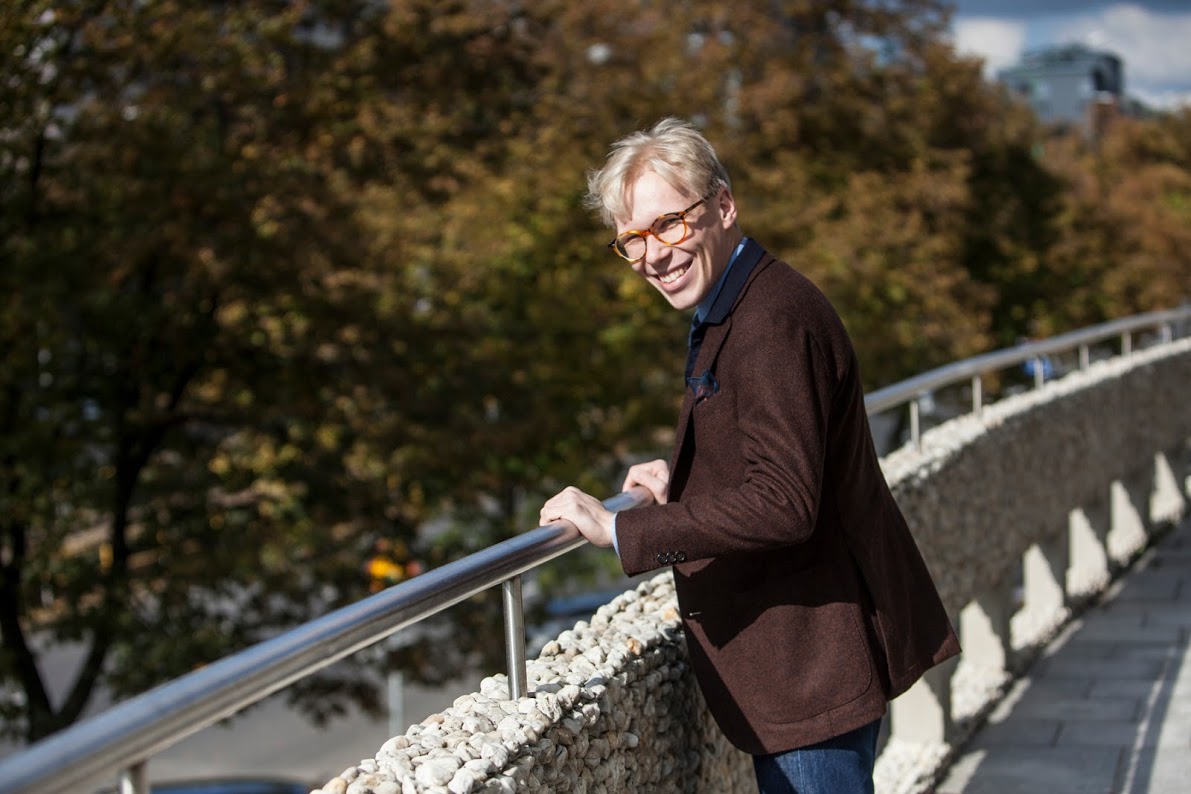 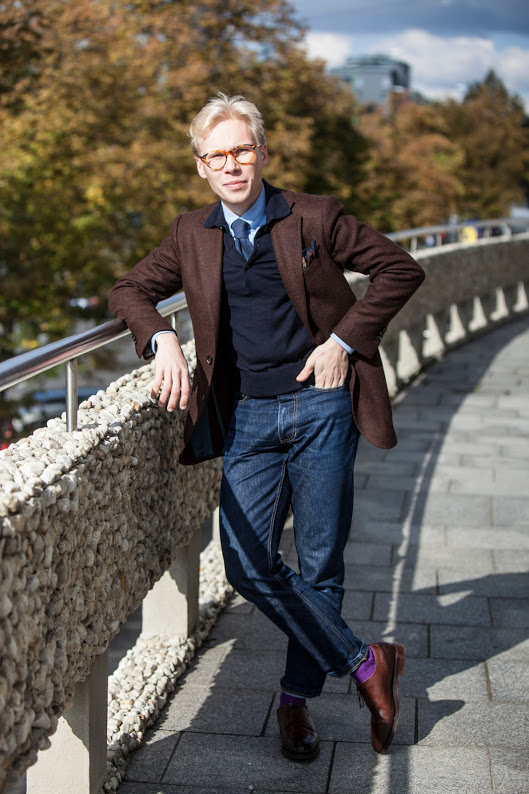 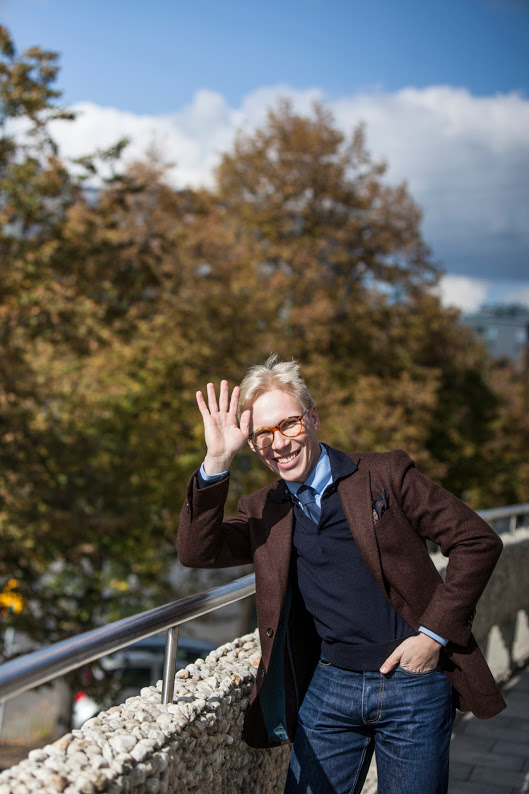 4.89 / 5.00 3303 reviews
IdoSell Trusted Reviews
2022-11-14
Very good
2022-10-27
The quality of the fabric and the craftsmanship is really outstanding.
View all reviews (3303)
This page uses cookie files to provide its services in accordance to Cookies Usage Policy. You can determine conditions of storing or access to cookie files in your web browser.
Close