Today, some more interesting facts for our 10th birthday. Read about our collaborations with bloggers (you haven't heard of them all!), surprising photos, our biggest orders and legendary products. Read further.

Author: Poszetka.com
And if you haven’t read it already, begin with  the first part of our trivia. Today we continue this list, beginning with number 12:

Ah, shantung that is! When we introduced it to our offer around 2013/2014 - as the first menswear store to do so in Poland (it’s been already popular in Europe then, as it was the era of great fashion blogs) - customers were really asking what this silk was all about. Pilled? Puckered? Poor quality? 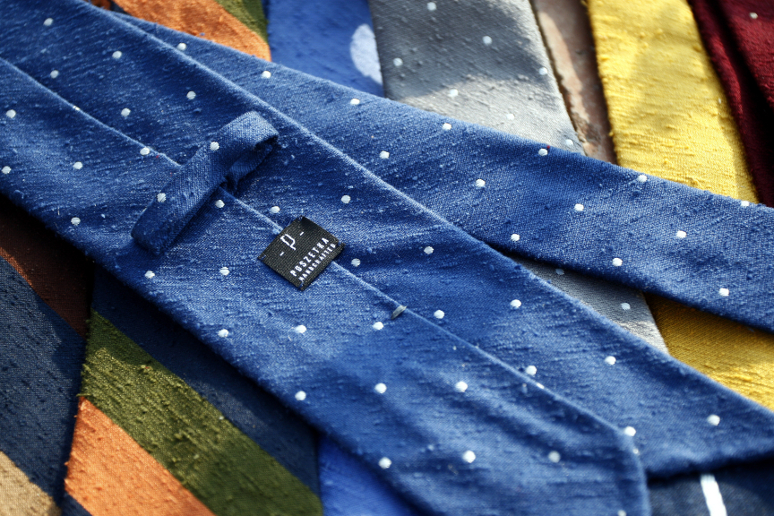 Back then, we only made a dozen or so pieces of a given color, as an experiment. Nowadays we haven’t heard any of these questions in quite a while and each tie collection made of this fabric becomes an instant bestseller. Good "fashion education" in Poland definitely helped - see, among others, this archival blog post by Mr. Vintage, his photoshoot with one of our first shantung ties. Link here.

A year later, in 2015, our greatest bestseller ever made its debut. If you were ever wondering what product was the one that beat all the others, now we answer: not the racing green grenadine tie, not a white linen pocket square, but… our “Poland” pocket square! 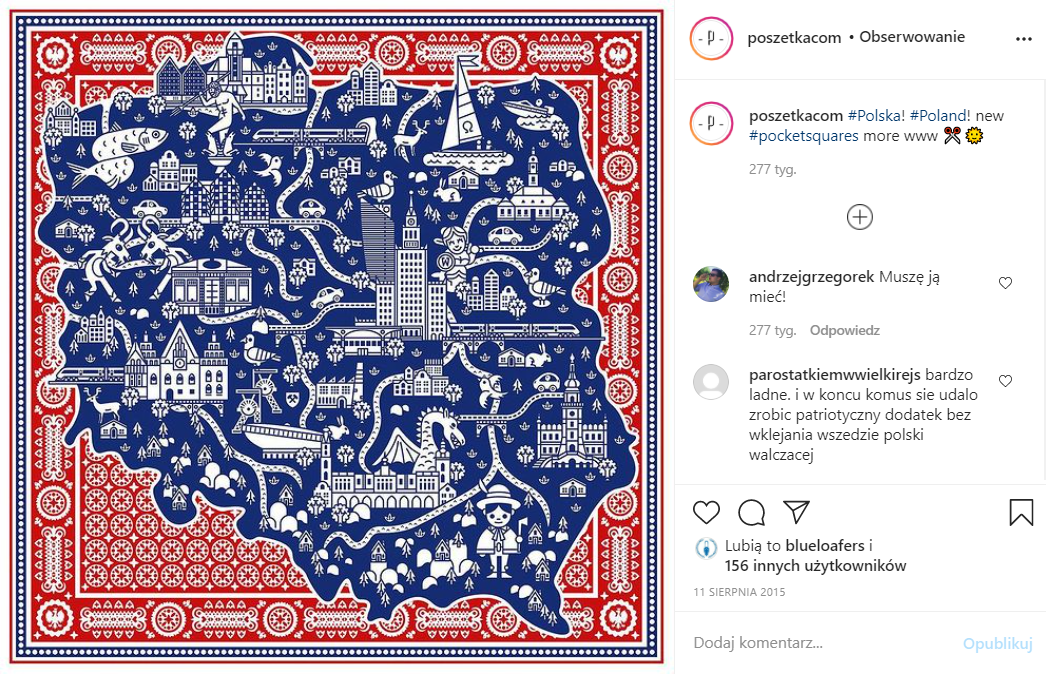 The pocket square with the illustration by Jan Kallwejt was already well received at its debut. Since then, it has had a few different color versions and several re-editions, each time quickly getting sold out and disappearing from our store. One day it will definitely be back again!

While talking about our original pocket square designs, we would like to emphasize that for us they have always been an important part of the offer. We invite Polish artists to design them and unique illustrations are created. They are definitely something more than just an accessory to put into a pocket, rather a small work of art! 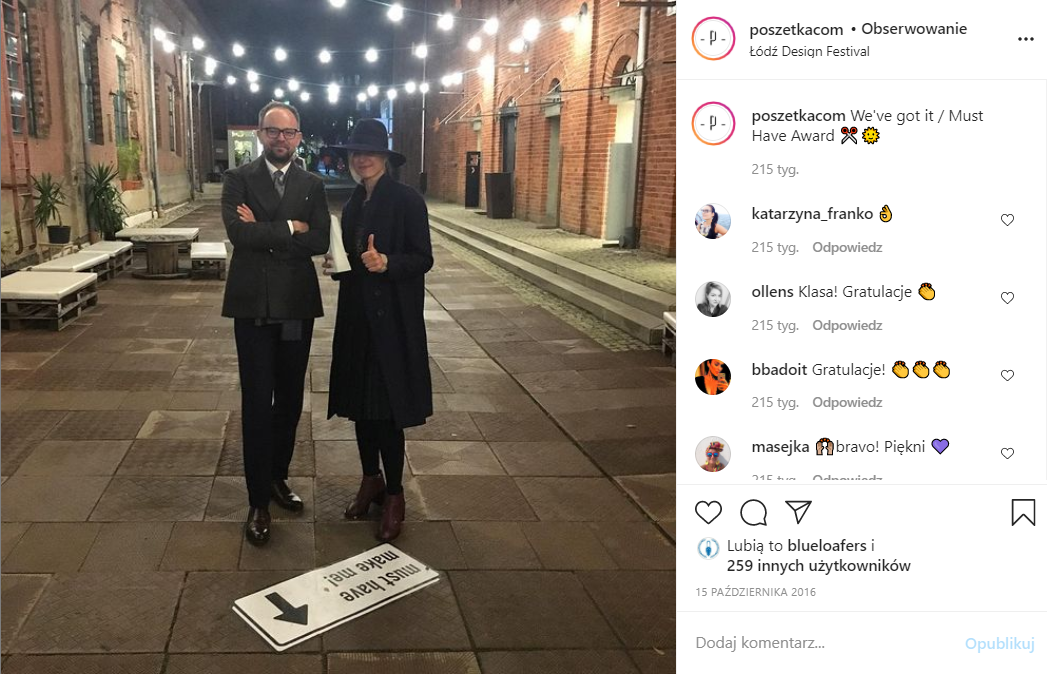 A very important event for us in this context came in 2016 - at the Łódź Design Festival we were awarded the Must Have award in the plebiscite for the best Polish products. We were honoured for 3 pocket squares by Gosia Herba: "Wilderness", "Football" and "Olympics".

The same year, we were selected for the "Esquire recommends" campaign, organized by this legendary title, which was then entering the Polish market. What is the most interesting in all of this? In our opinion, the fact that a year has just passed since the last issue of the polish edition of this magazine was released. Even such legendary titles of printed press are struggling to survive in the current times. 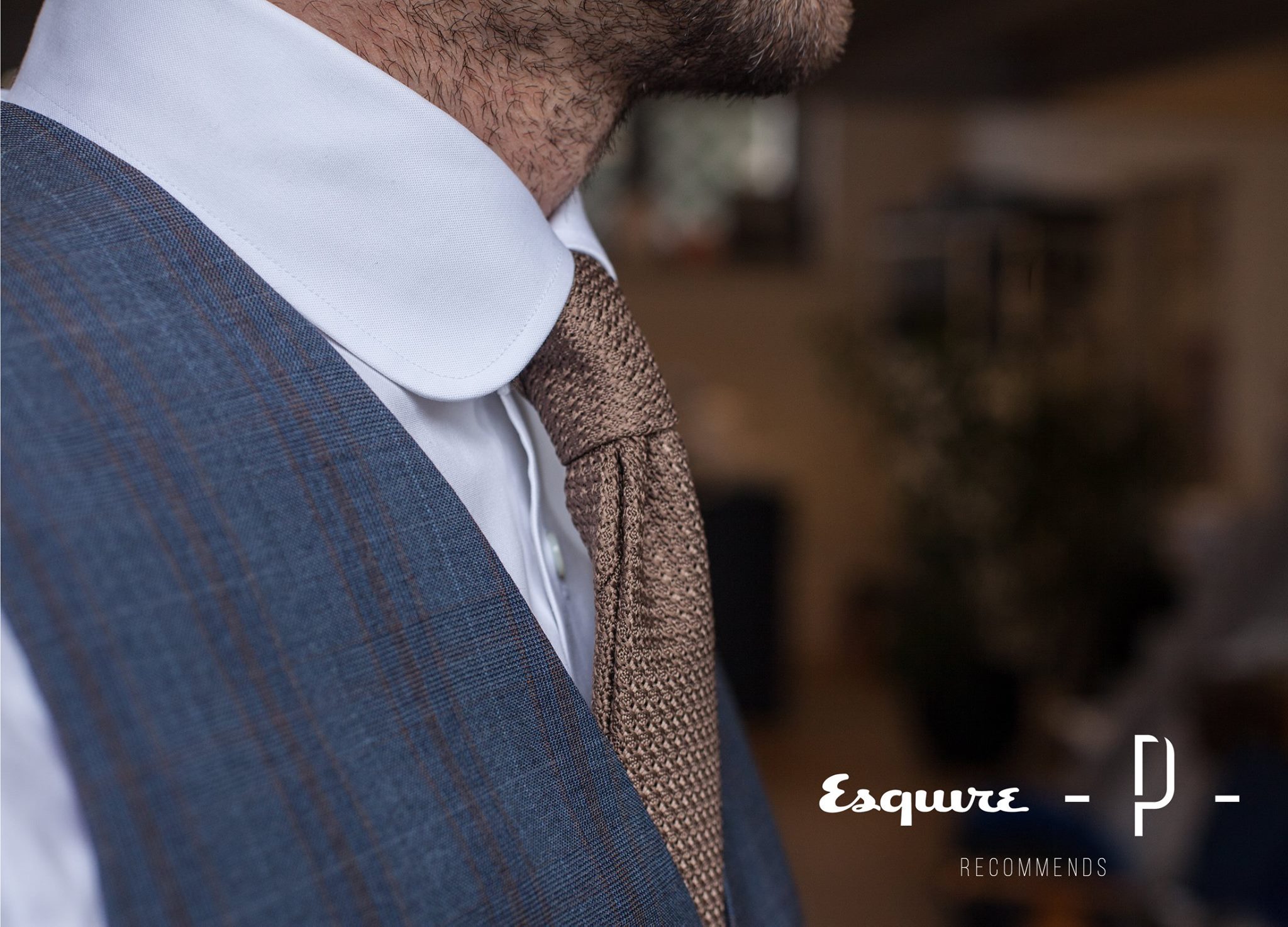 And now back to more positive memories. As you have probably noticed, local patriotism, Silesia and Katowice are extremely important to us. That is why we are still proud that in 2014 we made white cotton pique bow ties for musicians at the request of the Katowice-based NOSPR (Polish National Radio Symphony Orchestra). It was a real honor!

We have also fulfilled other commercial orders, including ones for the Marshal's Office of the Silesian Voivodeship (Silesian pocket square), RWE or Mercedes. In those days ordering, for example, 1,200 of the same pocket square designs meant that over the weekend we had to sit with the whole family and pack the pocket squares at home. Not to mention our seamstresses who, after a few days and nights of making these “rolls” by hand, exchanged experiences about which creams heal their fingers best. Nowadays it's a little easier, as we are prepared for such volumes! 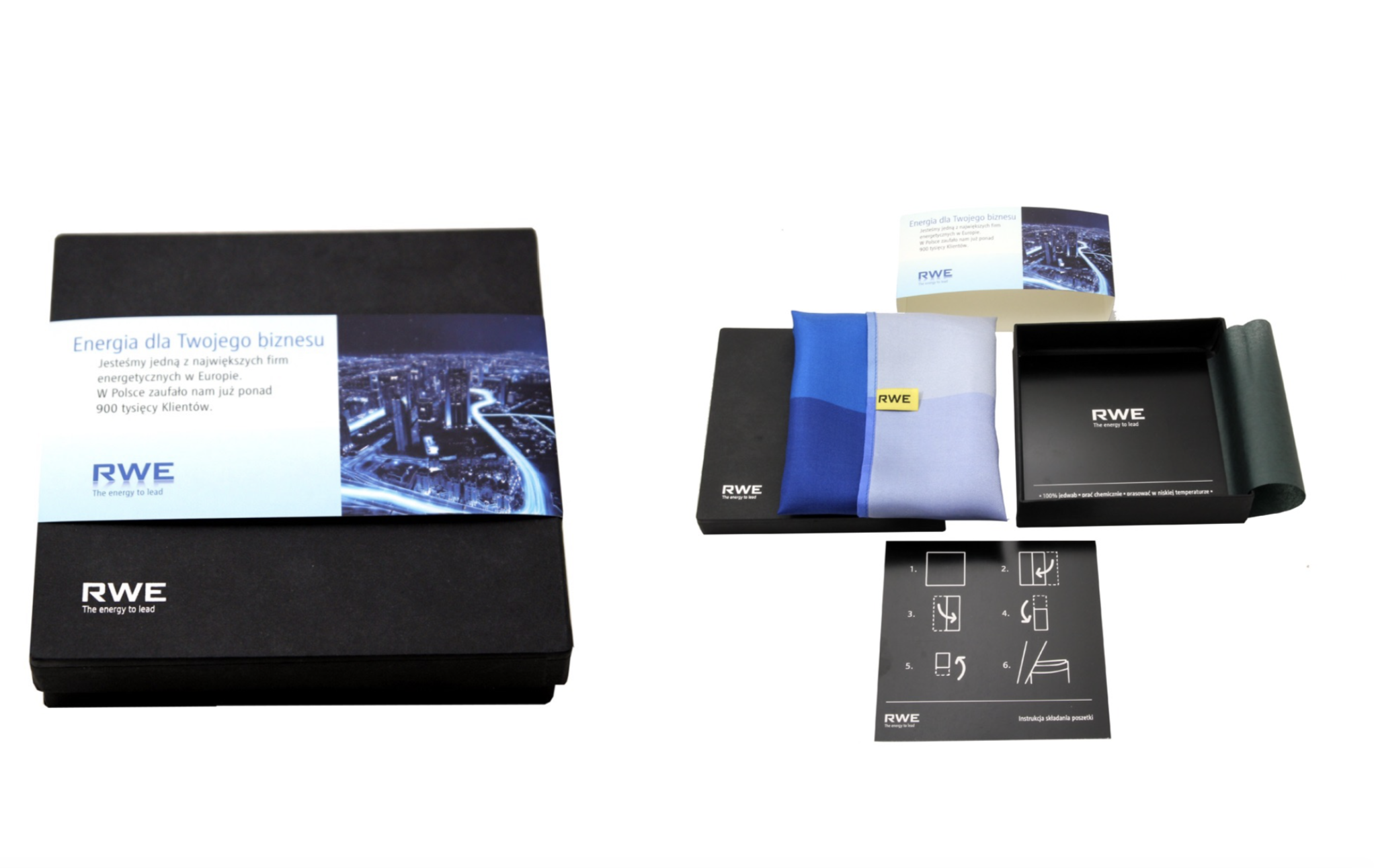 We also cooperated with bloggers - it is worth mentioning the most famous one first, that with Mikołaj Pawełczak (Blue Loafers). Together we introduced Wool Challis ties, made from a very soft fabric hand-printed in Macclesfield.

We chose 7 patterns, initially making only a dozen or so pieces per design. They were sold out right away! Later, we regularly repeated a series of other ties from this fabric, but it was this legendary seven that reached almost cult status. There are rumors that when bought second hand, these ties are sometimes worth more than they cost originally in our store. ;)

And here we will surprise you - you probably don't know/remember, but our first collection created with a blogger was released much earlier, already in 2012! 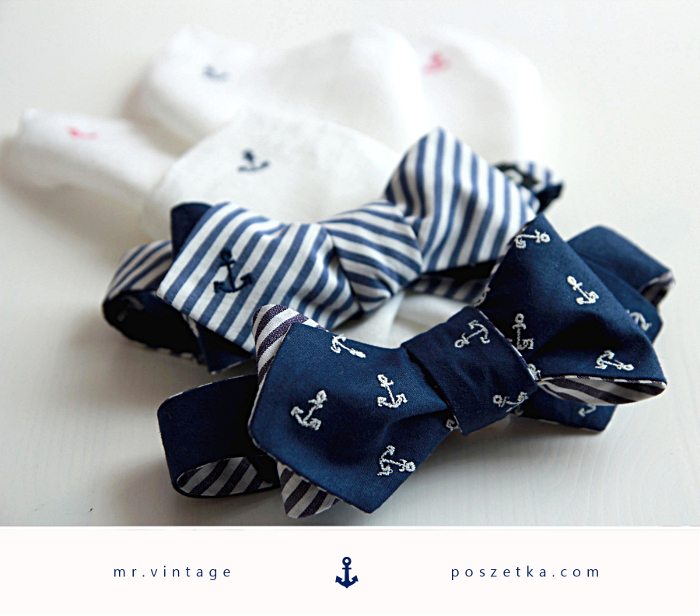 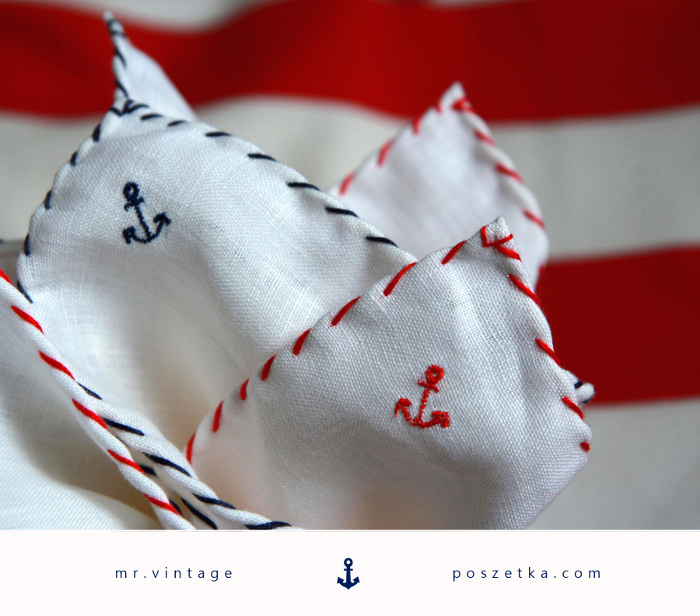 The biggest Polish blogger, Mr. Vintage, came to us with an idea for a marinistic collection - this is how 7 pocket squares and one double-sided bow tie were created. We highly recommend reading the original post on his blog, where, apart from photos, you will find a few more - from today's perspective - interesting facts about our company, still in its very early stage. Link here.

Here, for a moment, we change the topic and jump to… our online store, more specifically its first and second incarnations. In the comments under the just-mentioned article you can find a lot of those regarding the design of our website and the store. "Black was better!" some say. And what do they mean? There comes our first rebranding.
In addition to the new logo, which we mentioned in the previous section, the website has completely changed. It can be said that it has now been evolving since 2014 - but before that, a real revolution had to take place. Then a rather not very functional (and ugly by today’s standards) webshop became a modern platform that allowed for further development. To see how it looked before, check these screenshots at the very bottom. Link here. We don't publish them on our blog on purpose...

Coming back to the people, it is worth mentioning about other famous bloggers/characters from the world of menswear that wore our products. The two that we have the greatest sentiment for are Chad Park (the guy behind BnTailor), who sometimes appeared in his photos wearing the Wool Challis tie from the above-mentioned cooperation with Blue Loafers, and Andreas Weinas from Sweden, then just selected (by the Japanese edition of The Rake) one of the 10 best-dressed men in the world. That was something! 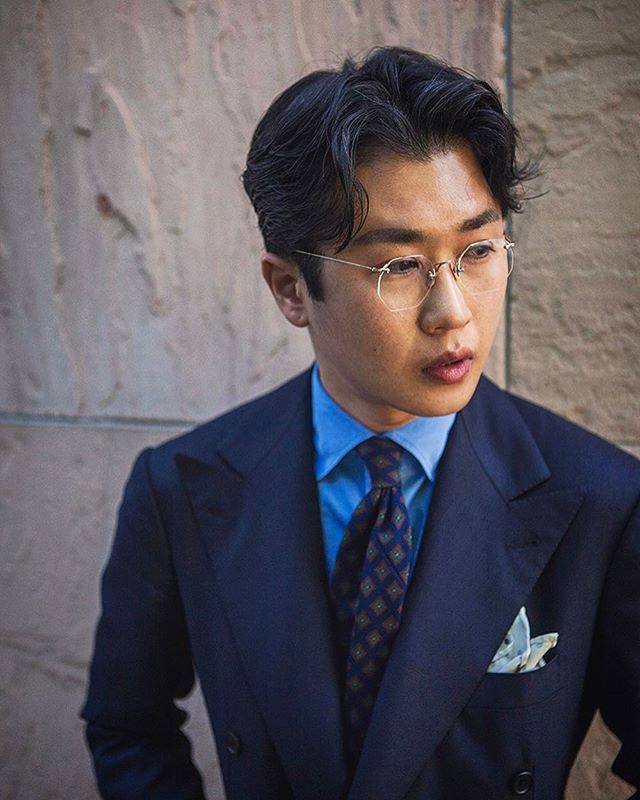 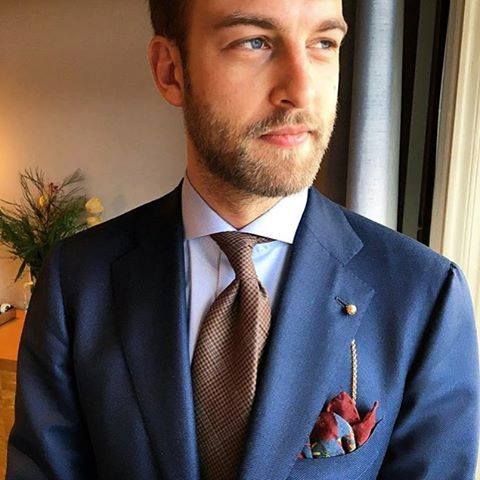 Back when all the "Important Bloggers" used to go to the bi-annual Pitti Uomo fair in Florence and everyone was very interested in what was going on there and who was wearing what, we visited there too! 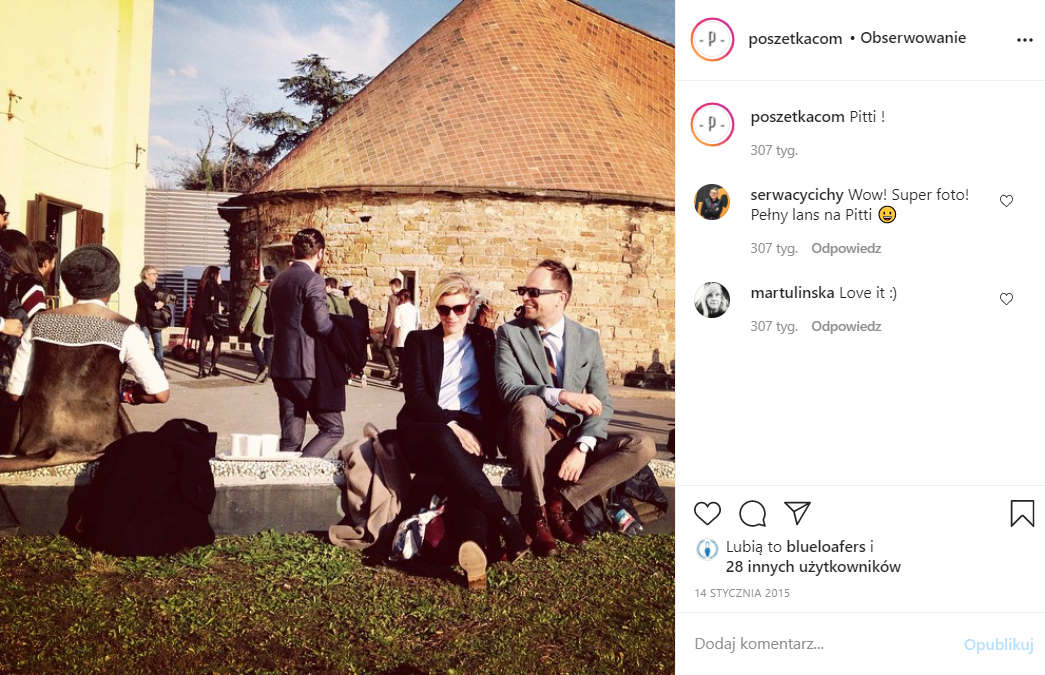 Although we did not participate in this unofficial competition for the most photographed outfit, we had a great time there, meeting a lot of really interesting people while actually working on future collections. Good memories!

We would like to end our trivia with a bit of immodest praise - do you know that Poszetka is older than all the Polish menswear-renaissance brands founded by bloggers? It is! 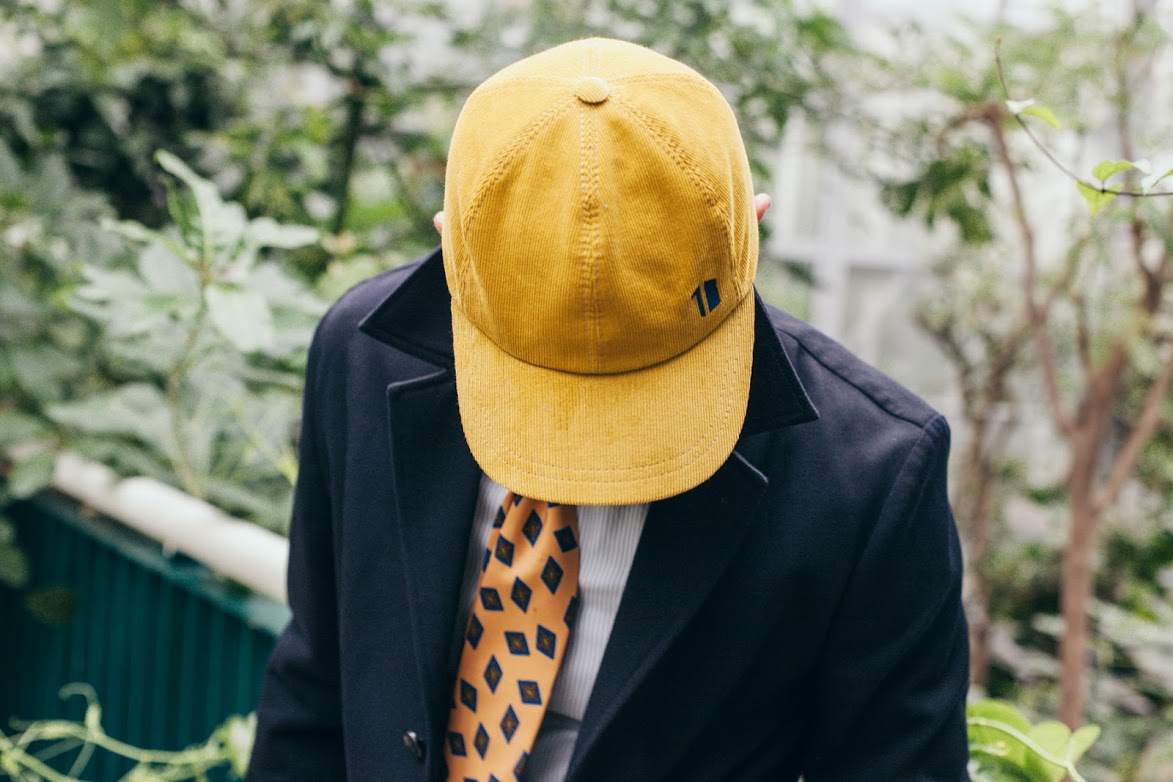 Maybe it is the fact that we were growing rather slowly at first, without a previously-built fanbase - or maybe it was that we were betting on smaller things for a long time, mainly accessories. Anyway, the facts are that it's been a long time since 2010 and we are the first to celebrate the 10th birthday in this (rather small) bubble on the market! We want to wish all our competitors a long and fruitful journey ahead, to many years to come.

We would like to thank everyone for these 10 years together: those with whom we created this market, companies and bloggers, and above all, you, our clients. Thank you again.

4.89 / 5.00 3002 reviews
IdoSell Trusted Reviews
2022-07-19
Very easy set up and ordering process. Customer service was also very helpful. Overall a positive experience that makes me want to come back.
2022-07-16
Top
View all reviews (3002)
This page uses cookie files to provide its services in accordance to Cookies Usage Policy. You can determine conditions of storing or access to cookie files in your web browser.
Close