Although majority of menswear bloggers would (or at least used to) say that loafers are strictly summer shoes, best worn without socks (or rather no-show ones), we just can’t agree with that.

It still amuses us how not-so-recent domination of Italians and sprezzatura in menswear circles and blogosphere mercilessly took credit for popularizing loafers and made them its trademark, especially among Europeans.

We all got used to seeing them on influencers’ and bloggers’ feet, lots of pretty Instagram pictures and Pitti Uomo coverages, often together with short and narrow trousers, summer suits and bare ankles. Preferably worn by suntanned Italians or those aiming to resemble them. That’s probably why the articles on this type of shoes usually stick to the view that loafers should be worn only in the summertime, on bare feet (or rather wearing "invisible" socks for hygiene reasons), in broad sunlight.

The problem is that it completely ignores the origin and history behind this type of shoes. 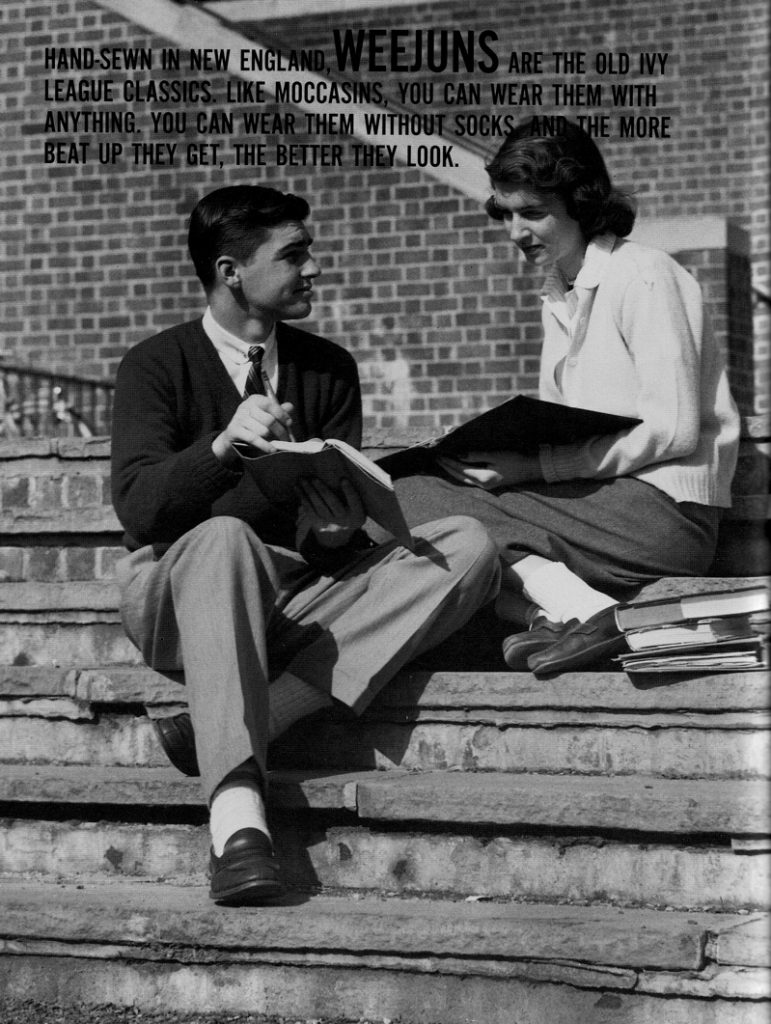 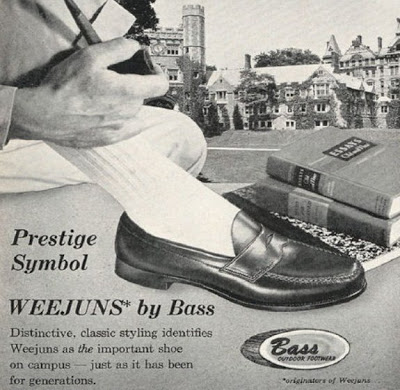 Loafers in today’s form did not come from the narrow streets of medieval towns, sunny piazzas and small cosy cafes, but rather from Ivy League campuses across the ocean. Their popularity skyrocketed in the 50’s and early 60’s, times when the true Ivy style was in full swing. They found their way to Europe later, on the wave of american dominance in the global popculture. Behind the original design are not any southern cobblers, but the big american companies like Alden, Brooks Brothers and G.H. Bass.

The stateside origin applies to both the penny and the tassel loafers. If it wasn’t for the Americans, we wouldn’t be able to spot any of them on well-dressed Italians’ feet, who are now widely recognized as their aficionados. And to make things even more complicated, we should add that originally loafers weren’t considered as shoes primarly for summer, but just as a more casual alternative to lace-up shoes.

Therefore, if two of the most popular claims about loafers appear to be false, what about the socks’ case? The answer is fairly simple: yes, you can wear your loafers with socks - and we mean the long ones. Moreover, there are plenty of situations in which they will be more appropriate than the bare ankles. 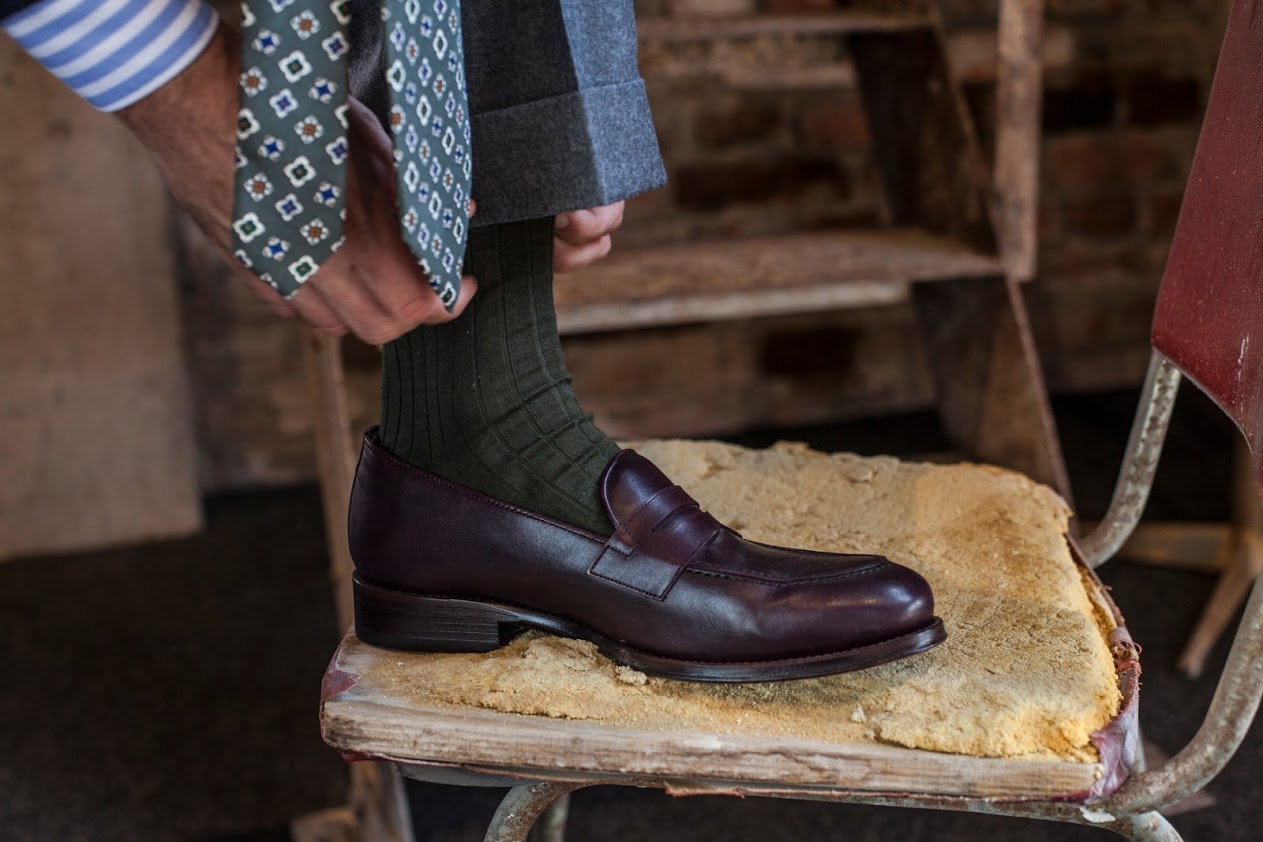 Most importantly, one should realize that even in northern european climate conditions loafers can be worn for 7-8 months a year, avoiding only the lowest temperatures and snowfall. A thick leather sole (but there are also loafers on rubber soles, even Dainite), especially when Goodyear welted, provides similar isolation and thermal comfort to the standard lace-up formal shoes.

In spring and autumn, on colder days, bare ankles would not only prove uncomfortable, but also look weirdly inappropriate in surrounding weather conditions - so wearing socks is the only option left. The other situation, in which we can’t imagine going sockless, is when loafers are a part of a business or semi-formal attire.

Now the question is: what kind of socks will look good with loafers? The possibility spectrum is quite wide, but one thing should always be remembered - majority of loafers cover less than the lace-ups do, what causes strong colours and patterns to appear even stronger. Anyway, we would say that there are 3 primary methods of matching socks with loafers.

The favourite of many, probably the most popular option nowadays. Bright colours, strong textures and loud patterns, used as a contrasting element or a reference to an other part of the ensemble (tie, pocket square, scarf etc.). This is the category where all the striped, dotted, bright-red-coloured socks belong.

It may be a good match with practically any loafers, but still easiest with the ones made from brown suede, thanks to its rich texture and versatile colour. The range of safe sock choices for other leathers (eg. burgundy calf) will be significantly narrowed, but still sufficient. 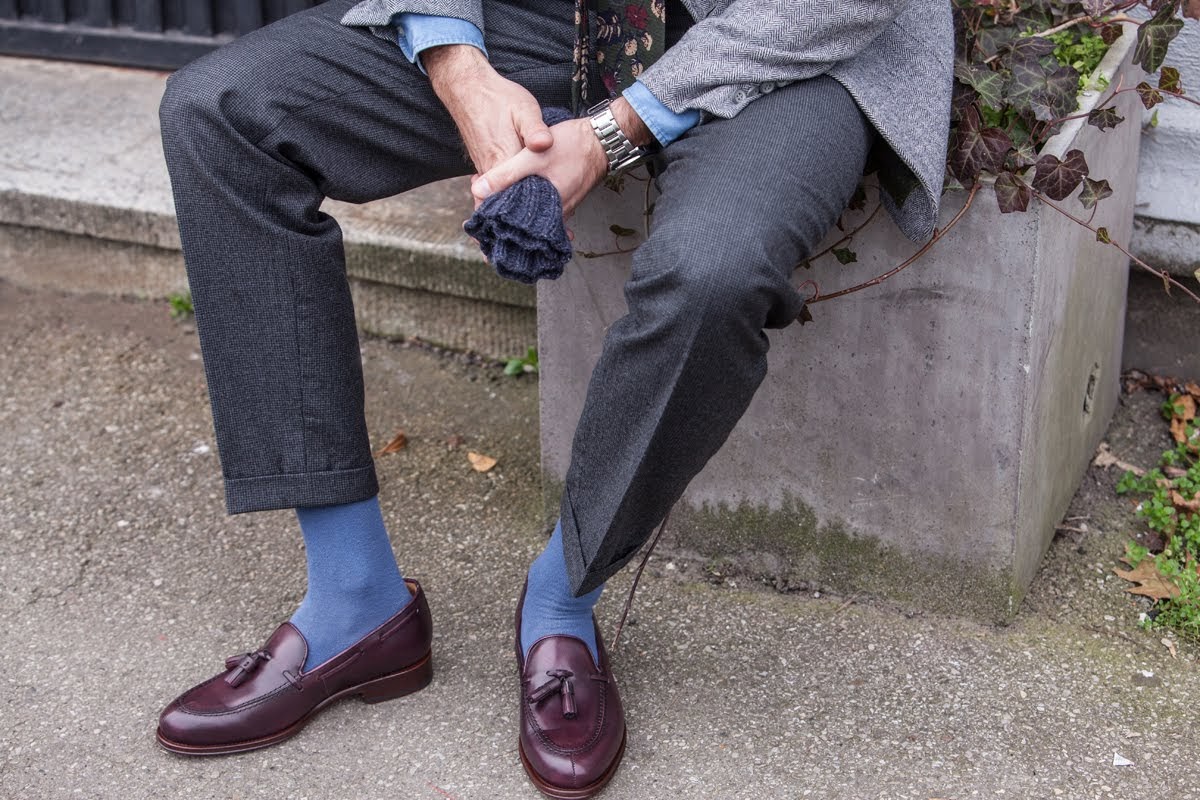 Overall, this option might be considered as a default for many, especially in the era of the ubiquitous funny socks. However, it also means that sometimes it will be more of a dull and cliched than striking and brave choice, lacking the desired effect.

Nonetheless, there are plenty of situations and outfits where socks of this kind are totally acceptable when skilfully paired (tip: jeans are always a good starting point). Just remember that they look best with modern smart casual rather than traditional Ivy or scandinavian minimalism

The easiest, but not the most popular way. The rule is simple: just choose a pair of (rather thin) socks in a colour resembling your shoes or trousers and you are good to go (if in doubt, take dark navy ones, they work in 90% of cases). Ideally your loafers should be darker colour, like chocolate brown, burgundy, black or navy.

We like to use this method especially with grey and navy suits, mainly at the times when a tie is worn. It helps to add a bit of formality impression to the loafers, making them look like a luxury, serious pair of slippers, in a positive way.

This should be a default option always when loafers are worn in a more formal context. However, it is not limited to them only - in fact, it works in most of the cases. Even if you are wearing jeans and a t-shirt, you just can’t go wrong with blue or brown/burgundy/etc. socks (depending on the shoes choice). Just remember to use thicker and/or more textured socks in the casual outfits. That’s it!

First and foremost, white socks. Necessarily the ones with the characteristic ribs, just avoid purely athletic ones. This colour harks back to the classic Ivy style, in which white socks were widely used and considered a really versatile choice. That means that they will look best paired with all kinds of penny loafers, but also with burgundy (and black for those who dare) tassel loafers. Wear them with jeans, khakis, olive military trousers, grey flannels - all kinds of clothing that say America, not Italy.

Summing up, we can say that there are plenty of ways to wear proper socks with loafers - you don’t always have to show your ankles wearing only those invisible socks. We personally recommend you to experiment and seek new possibilities, using our tips and thinking beyond them. 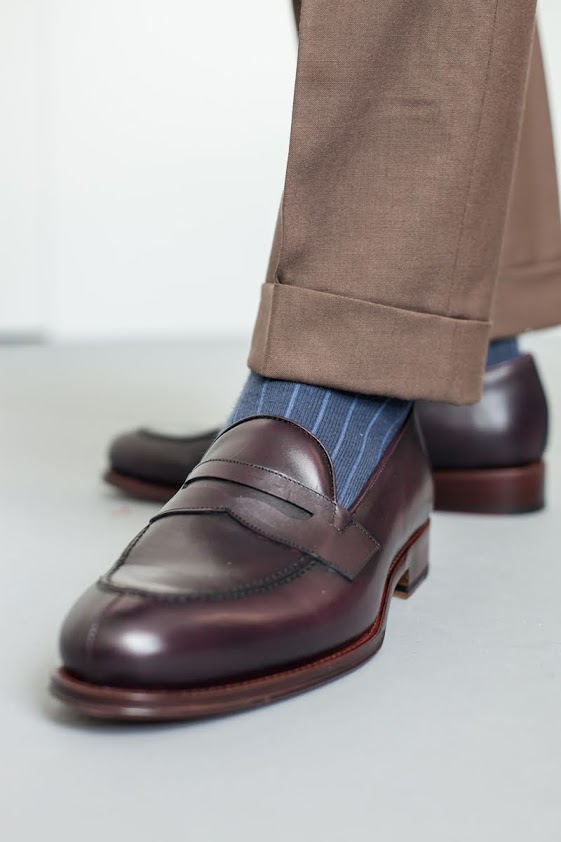 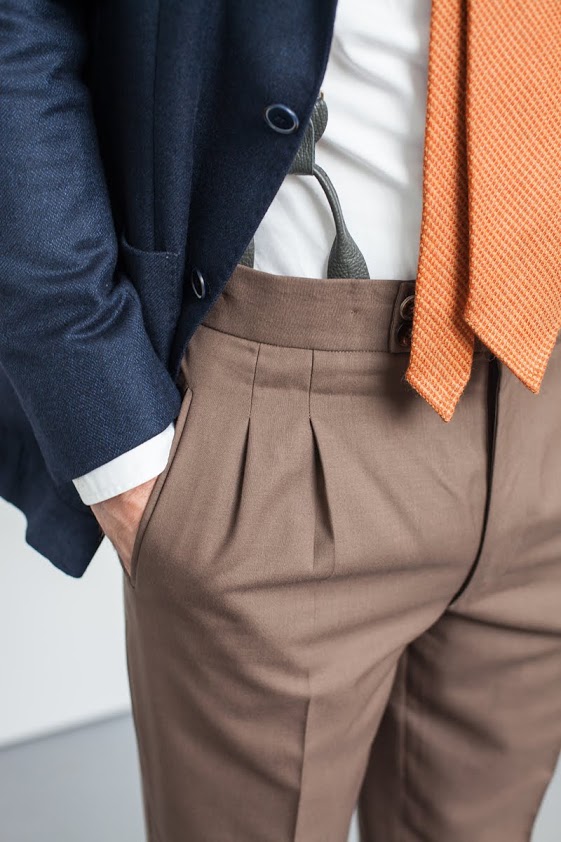 Oh, and remember - loafers are not italian and you don’t have to restrict wearing them to summertime only. Over.

4.89 / 5.00 3303 reviews
IdoSell Trusted Reviews
2022-11-21
Amazing
2022-10-16
The size guide is useful while the description and the photos helped me to do my choice. Thanks again for proposing clothings of classic/sartorial style. I would have loved to have a Poszetka "at home" in France. Hopefully one day you become big enough to get stores in Europe
View all reviews (3303)
This page uses cookie files to provide its services in accordance to Cookies Usage Policy. You can determine conditions of storing or access to cookie files in your web browser.
Close