No, it is not an old, pilled tie. It is shantung! This kind of raw silk with its characteristic slubby texture can’t be easily mistaken with any other fabric.

Seeing shantung in person for the very first time has to be a really baffling experience for a lot of people, especially if it is then called silk. An untrained eye, used to soft and delicate printed silks and thicker, pliable jacquards, won’t be able too see much resemblance in this slubby and uneven fabric that shantung is. 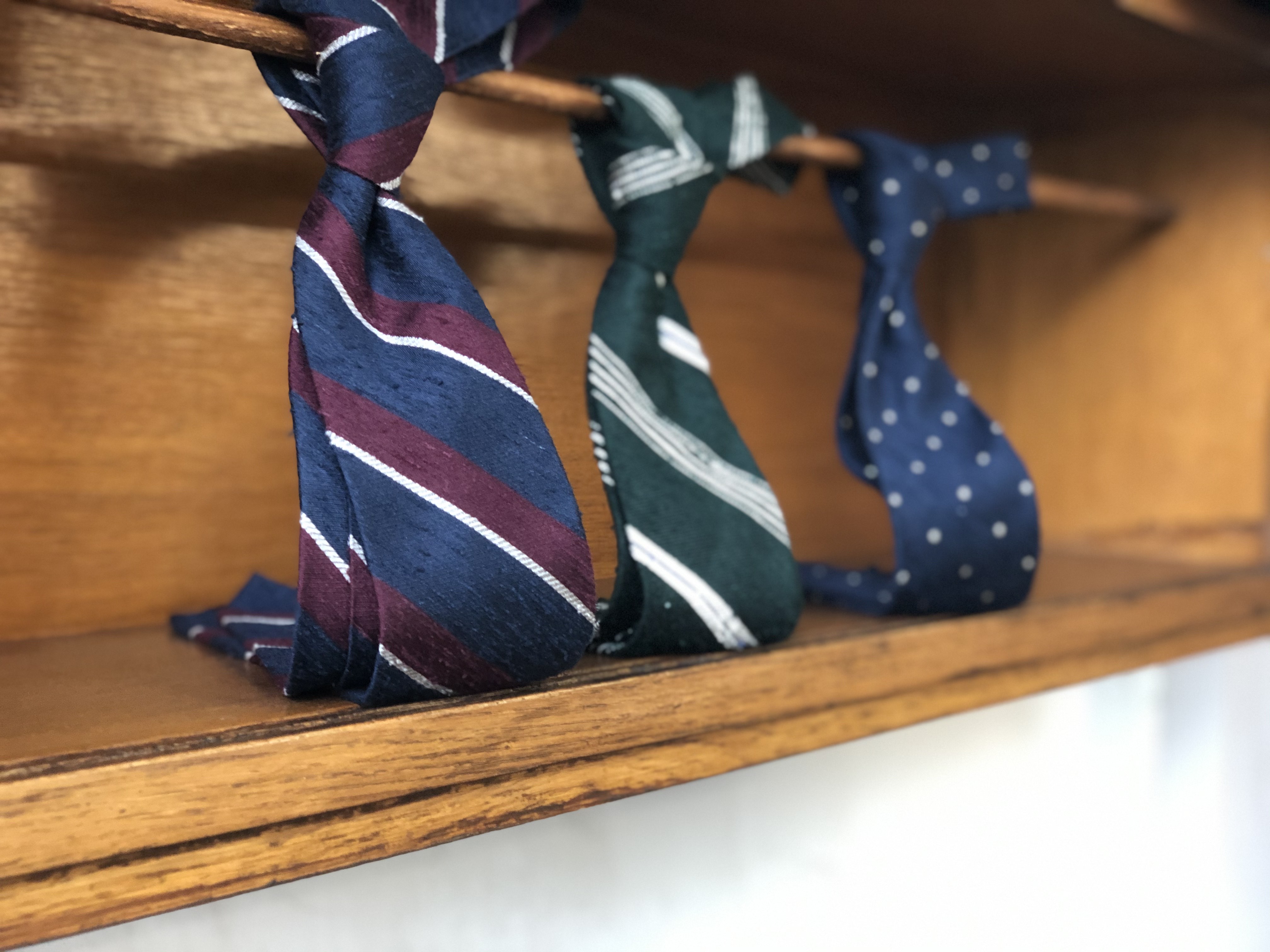 How is shantung made?

Let’s get a bit technical for a while and answer the question. Shantung is made out of raw, unprocessed silk yarns of different lenghts, which are responsible for this slubby appearance. Because of its qualities - mainly robustness - shantung silk was used to produce curtains and tablecloth, but also some womenswear, mainly dresses. It is quite similar to dupioni silk, used sometimes for dinner jackets and sportcoats, but stiffer and more textured.

We don’t know exactly who or when made the first tie out of it. But we can admit it was a rather good idea - we cannot imagine living without these ties! Although name shantung comes from the chinese province bearing the same name, nowadays majority of shantung used to produce them comes from the Como region in northern Italy, the go-to place for tie silks. 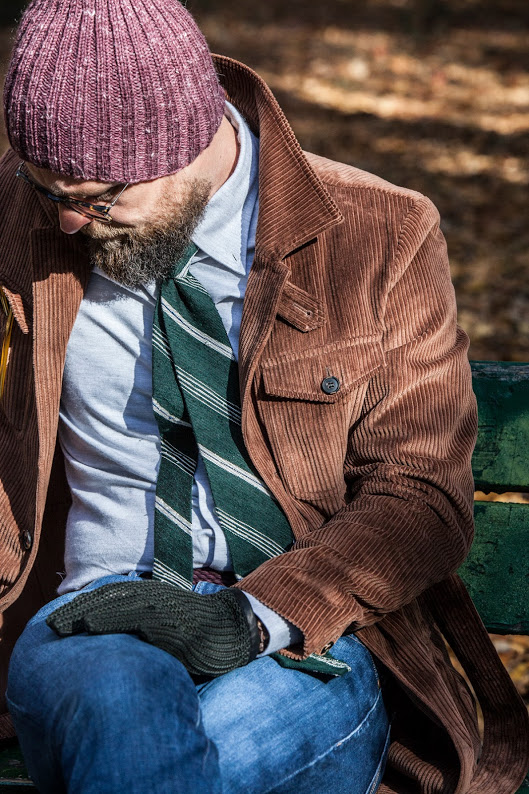 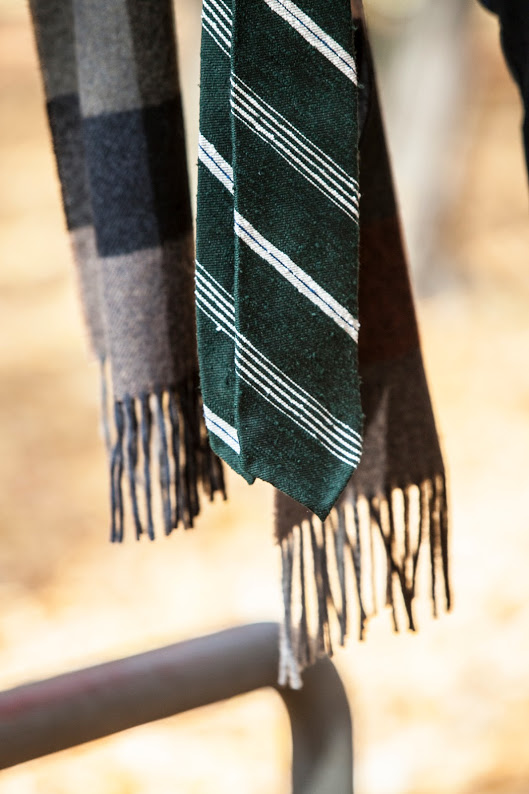 One can say that the current popularity of shantung emerged from the tendency to informalize men’s clothes that has been happening everywhere for the last few years. Suits are replaced by sportcoats, worsteds are replaced by more textured cloths and so it seems to be natural to replace the usual glossy silk tie with something less formal. By the way, that is the reason why knit ties have been so popular for a decade or so - but they are not always a good solution, sometimes there is a need for a proper tie, a one that has a substantial construction and can make a perfect dimple, but at the same tie doesn’t appear too stuffy.

Shantung tie, even for an untrained eye, would look good in this situation. Its matte and slubby texture sends a message to everyone around - it is not a formal attire. It says that the wearer tied a tie on his neck not because he had to, but because he wanted to. 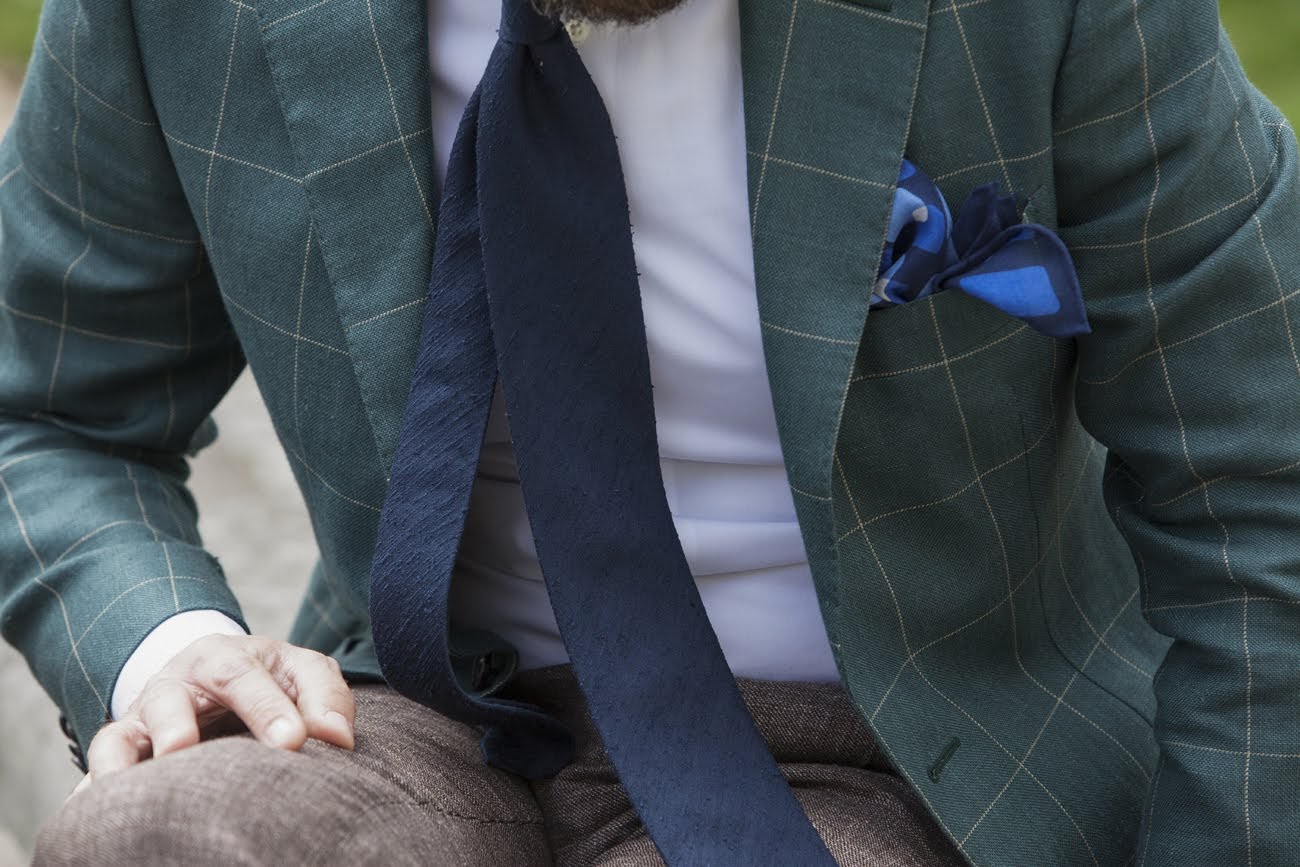 Do not forget that a shantung tie can be also just a fun to wear - it allows the wearer to add an interesting element to his otherwise simple attire, without a need to add a complex pattern, only playing with the textures. Even tying it might be a pleasure - a bit of stifness and pliablity it has helps to achieve a perfect, satisfying dimple without much effort. 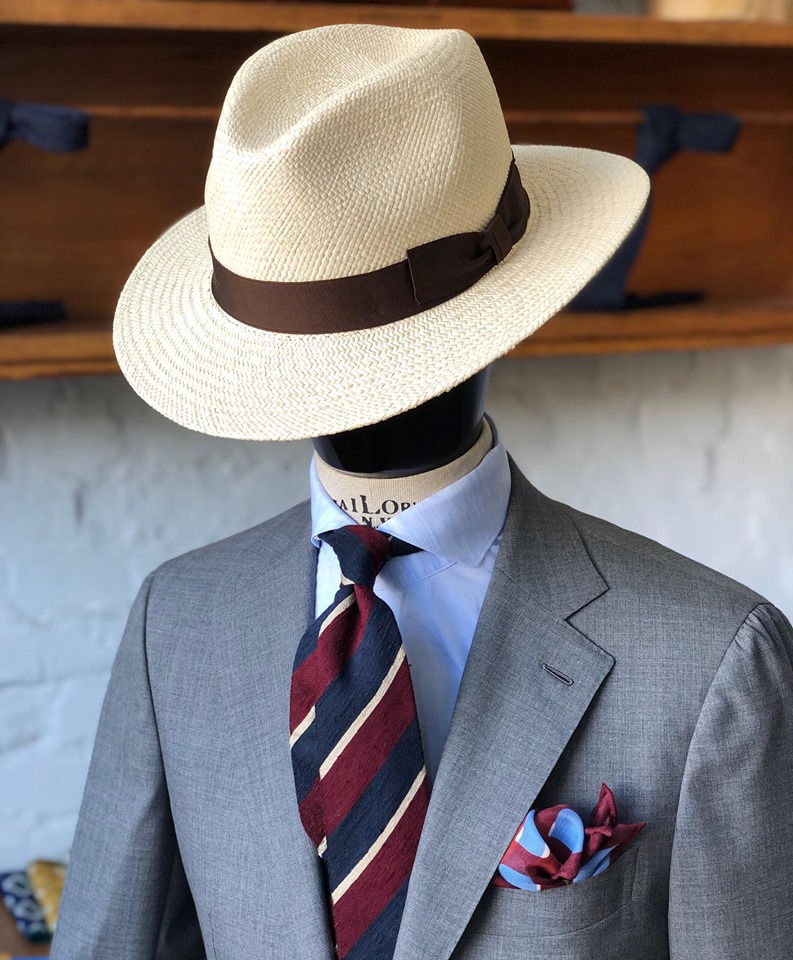 What to pair a shantung tie with?

A huge advantage of silk is that, in contrary to linen or wool, it is not a seasonal fabric. Therefore, shantung ties are useful whole year - they can look great with both heavy flannels and rumpled linen, tweed jackets and fresco suits, corduroy and seersucker. Pairing them with those rougher fabrics is almost always a great idea!

Obviously wearing them with more delicate, fine worsteds is not forbidden. Until it is not supposed to be a very formal combination, pairing a green or a brown one with a navy suit will make a perfectly alright bussiness combo, especially when the striped shirt is used!

However, our recommended choice of business attire to pair a shantung tie with would be the so-called menswear uniform. A classic combination of gray trousers and a navy blazer acts as a perfect blank canvas for various tie-related experiments, allowing for even more than a plain navy suit. Single-coloured, block stripe, polka dot - all kinds of raw silk ties will match this duo! 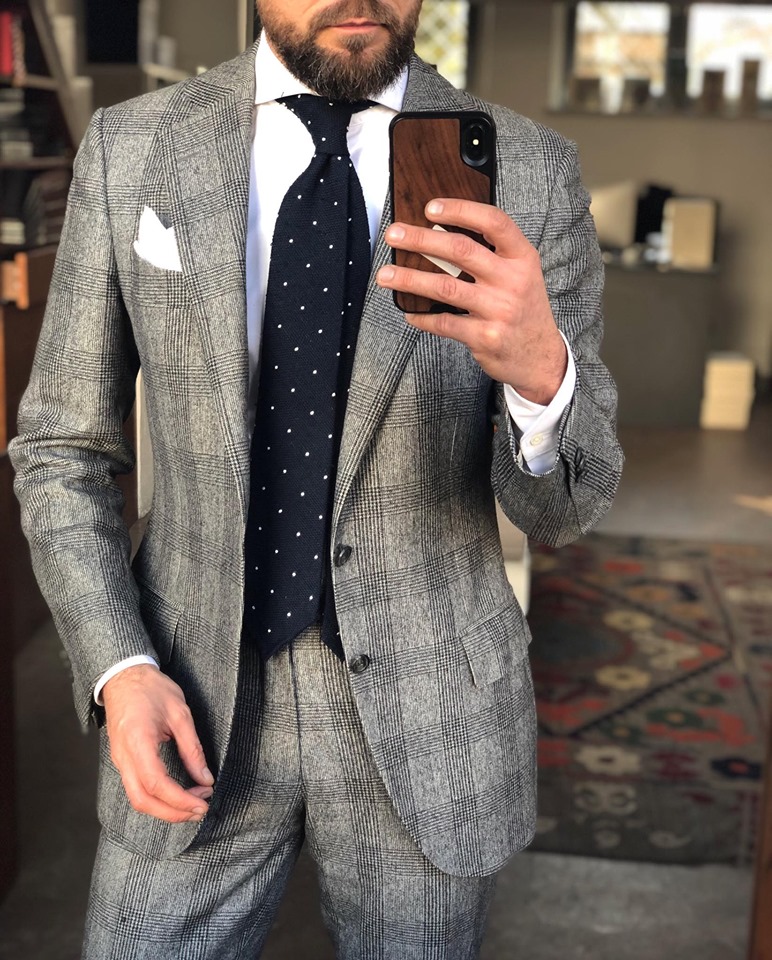 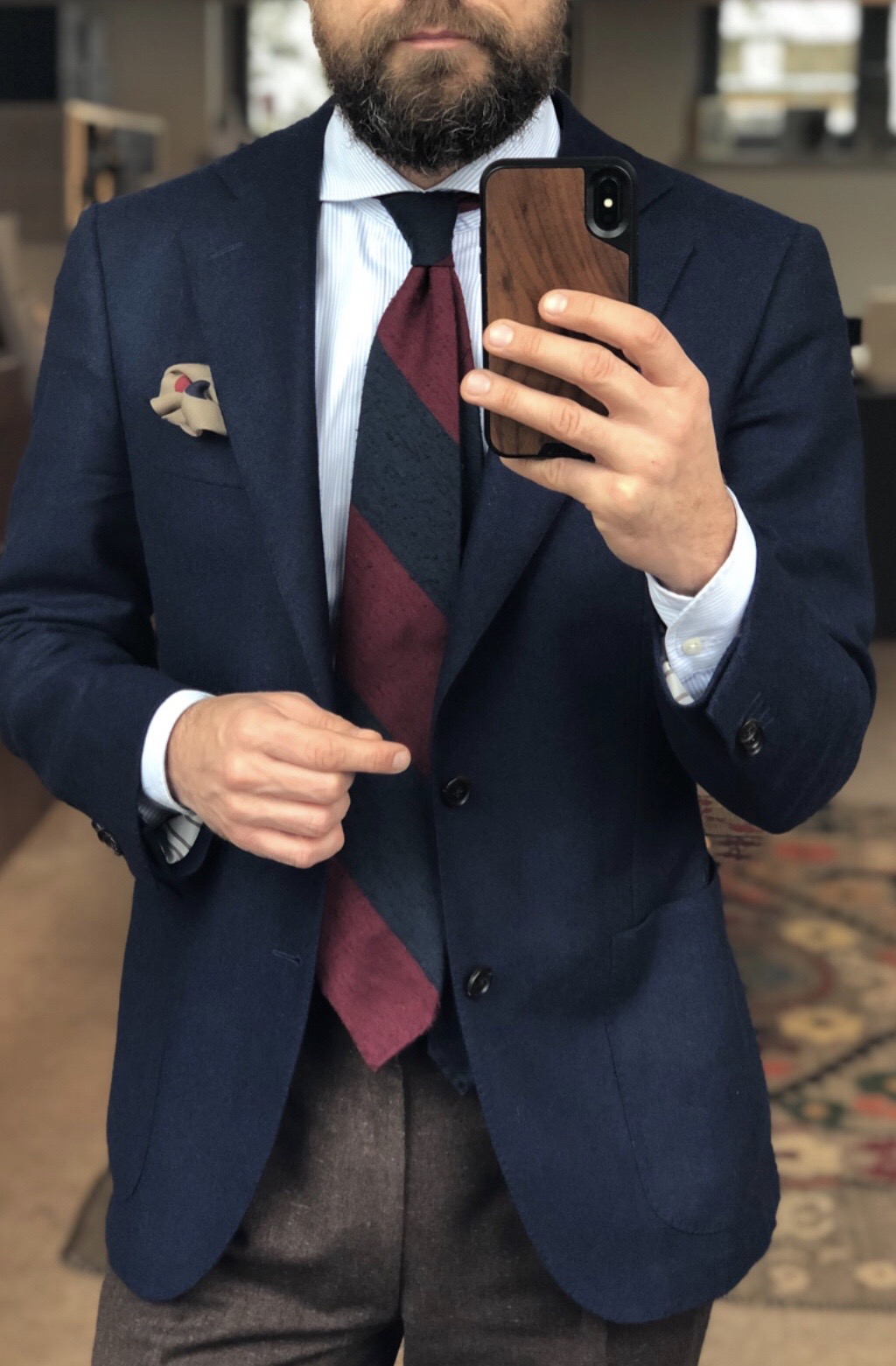 Shantung and the menswear uniform

The true beauty of a so-called menswear uniform lies in its versatility. It can be used for multiple occasions, both those quite formal and those completely casual, depending only on the shirt and tie used.

Plain shantung tie is the easiest, basic option that is supposed to catch one’s attention only by the texture, not by any pattern. What colour works best? The one you like the most! Because of the fact that the tie is heavily textured AND plain, it goes well with almost anything and is much more versatile than a same-coloured satin silk tie. In terms of versatility, shantung is generally pretty similar to grenadine, just suited better to the lower levels of formality.

To spice things up a little bit, just replace a plain white or blue shirt with a striped one, not necessarily in one of these colours. 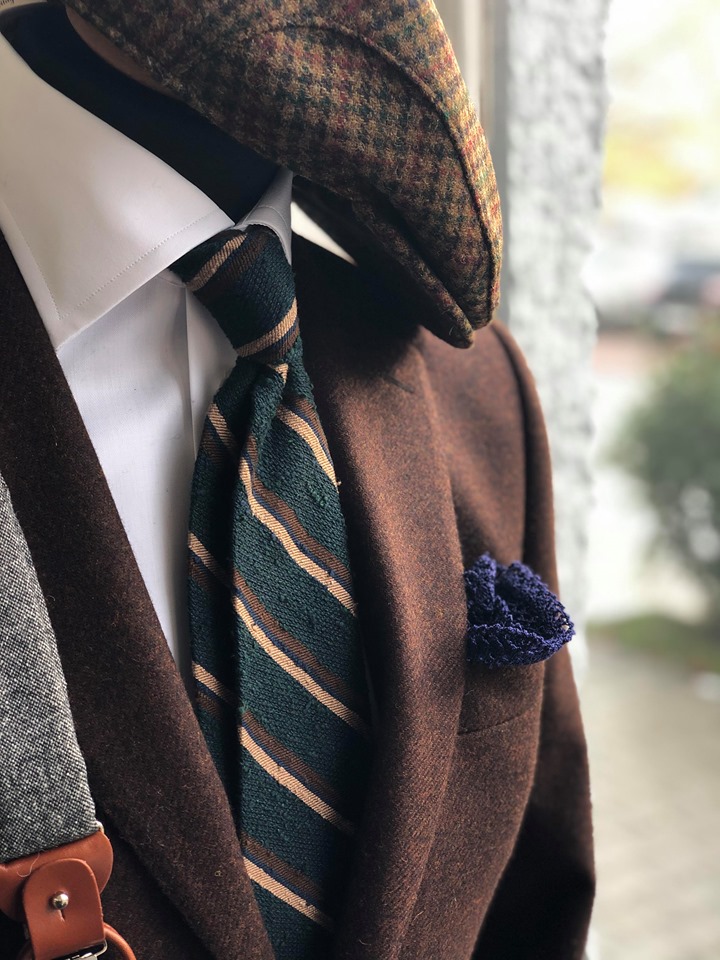 Striped shantung might be called a distant relative of the classic regimental tie. The best kind of stripes for this slubby fabric would be arguably the so-called block stripe, which consists of some really thick stripes in two or three different colours. Huge size of the pattern looks modern and also makes it simple to pair with other patterned elements. If you are afraid of a block stripe tie dominating the whole outfit, just make sure that at least one of its colours matches the one appearing elsewhere on the jacket, shirt or trousers - it will help to calm down the whole look. Obviously more standard regimental-type stripes will work on shantung, too.

Shantung ties may be a useful addition for almost every wardrobe, both for those who have just started building theirs and those who have been interested in menswear for a long time. If you choose wisely, it might even turn out that it will become the most frequently used tie in your collection! 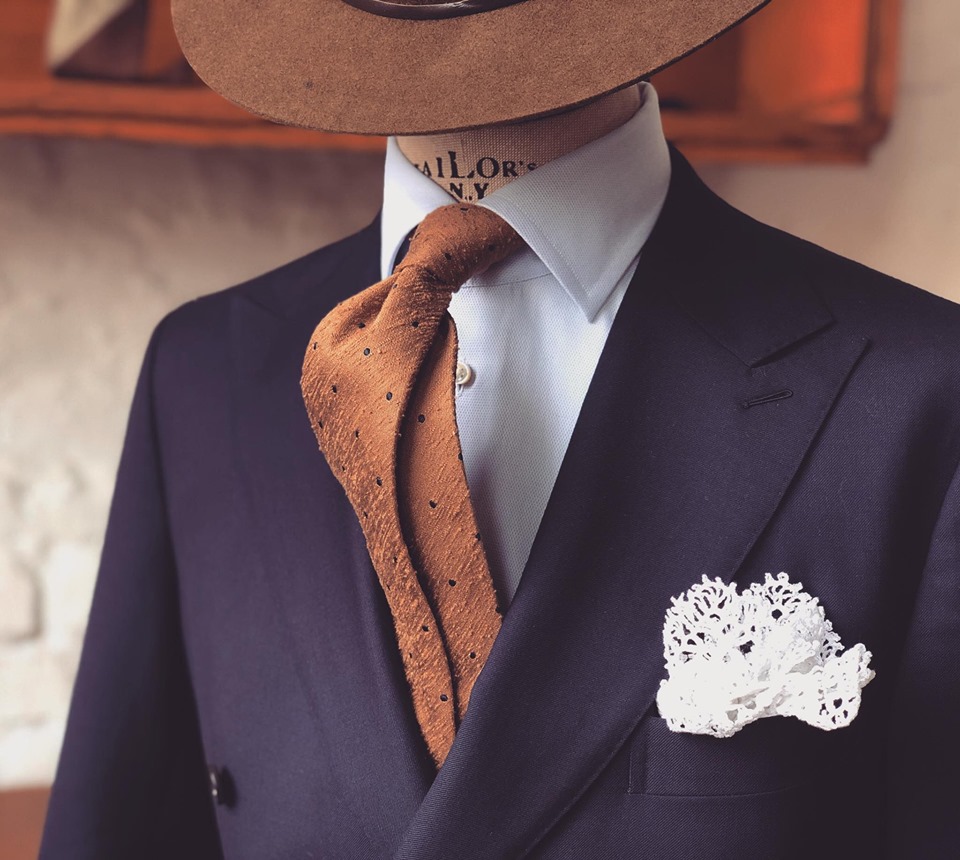 4.89 / 5.00 3303 reviews
IdoSell Trusted Reviews
2022-11-11
ties is excellent quality, lovely color
2022-10-30
Smooth and profesional, as always!!
View all reviews (3303)
This page uses cookie files to provide its services in accordance to Cookies Usage Policy. You can determine conditions of storing or access to cookie files in your web browser.
Close