In the second episode of our Product Focus series we feature not one, but two (or well, maybe even three…) separate items, all of them parts of the Poszetka’s new SS2020 collection.

However, they are all tied by the common theme, the cloth they are made of: cotton seersucker.

All the outfits shown here are centered around white trousers made of this fabric, often paired with a navy seersucker blazer. Well, not one, but two pairs of trousers. 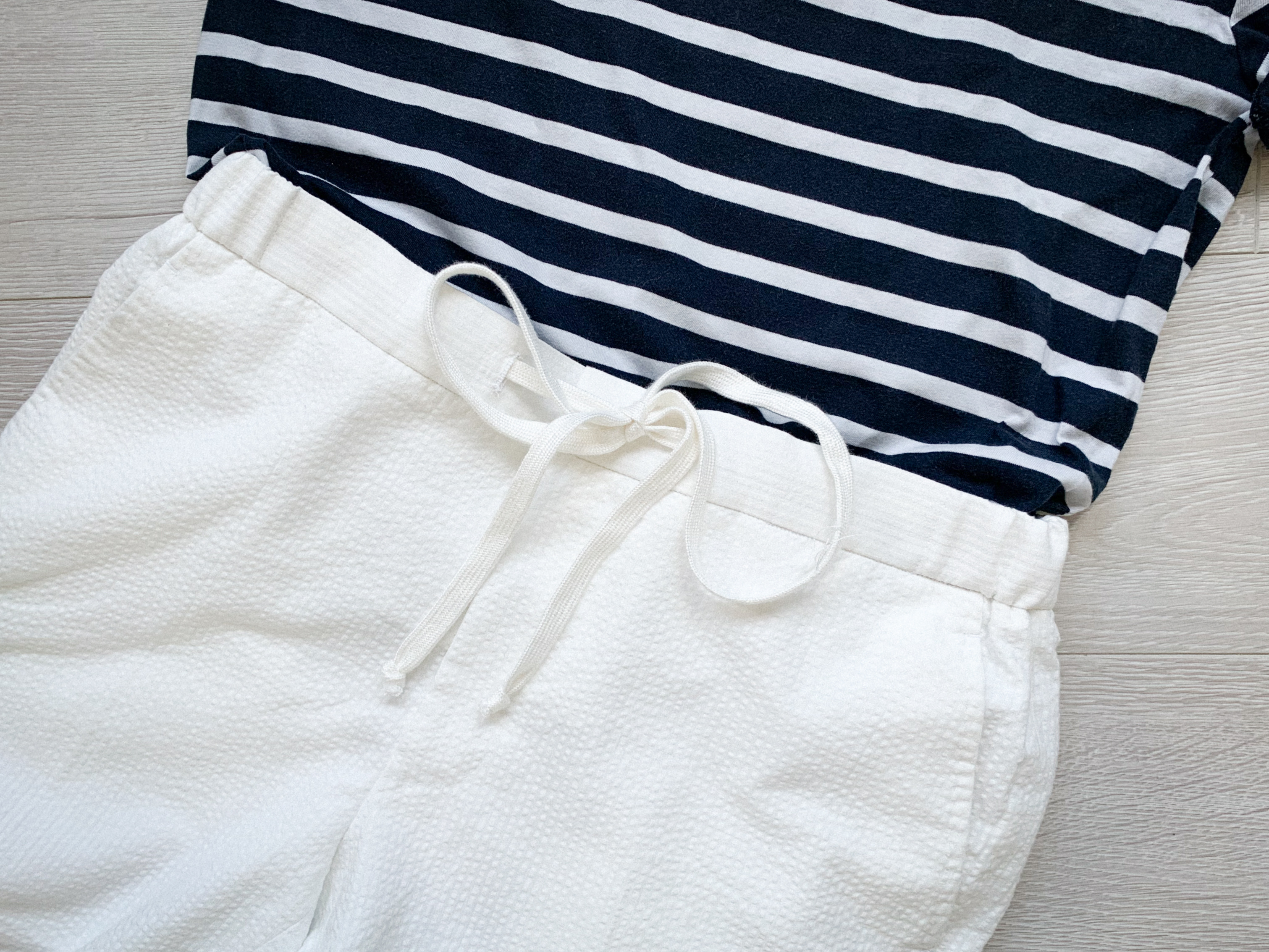 One of them could easily be called summer sweatpants - they feature elastic waistband and a drawstring closure, similar in design to some summer linen pants or trendy joggers. Dedicated to those looking for a loose summer-y pants that will be useful both on vacation and in the city. Very comfortable, very informal, just a bit controversial.

The alternative is much more conservative, dedicated to those who love classics, more formal combinations and sartorial accents. High rise, double pleats, side adjusters and wide waistband are the details that place those trousers on the other end of formality scale. The cloth might be exactly the same, but it’s the final impression that matters. 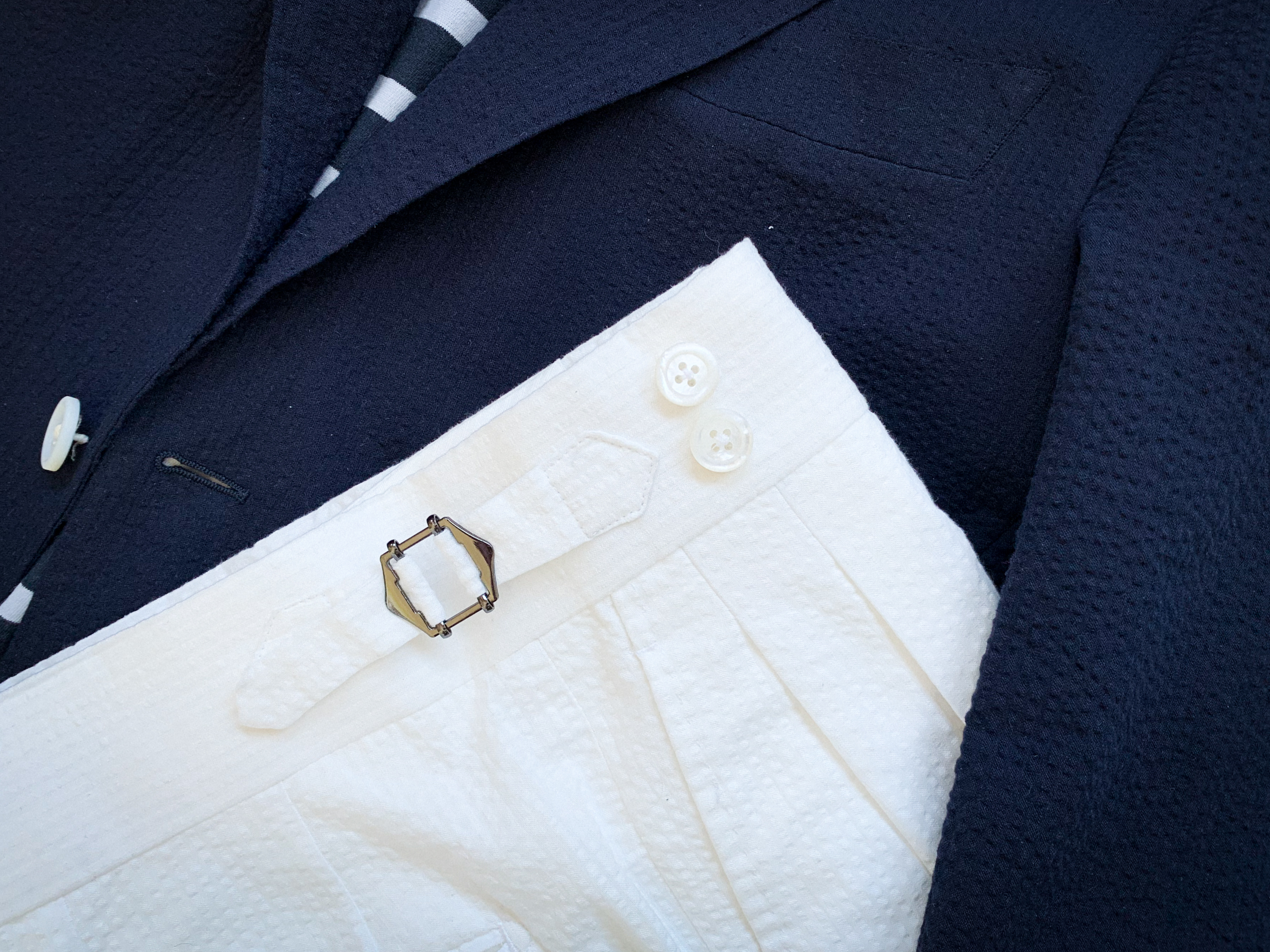 Ah, we should also mention and say a few words about the blazer/sportcoat pictured. Well, it is similar to the basic Portofino suit, the only difference being the button’s colour - pearl white instead of light brown, chosen to pair better with white trousers’ buttons.

Well, now it’s time to move on and finally focus on the more substantial part of today’s article - outfits! 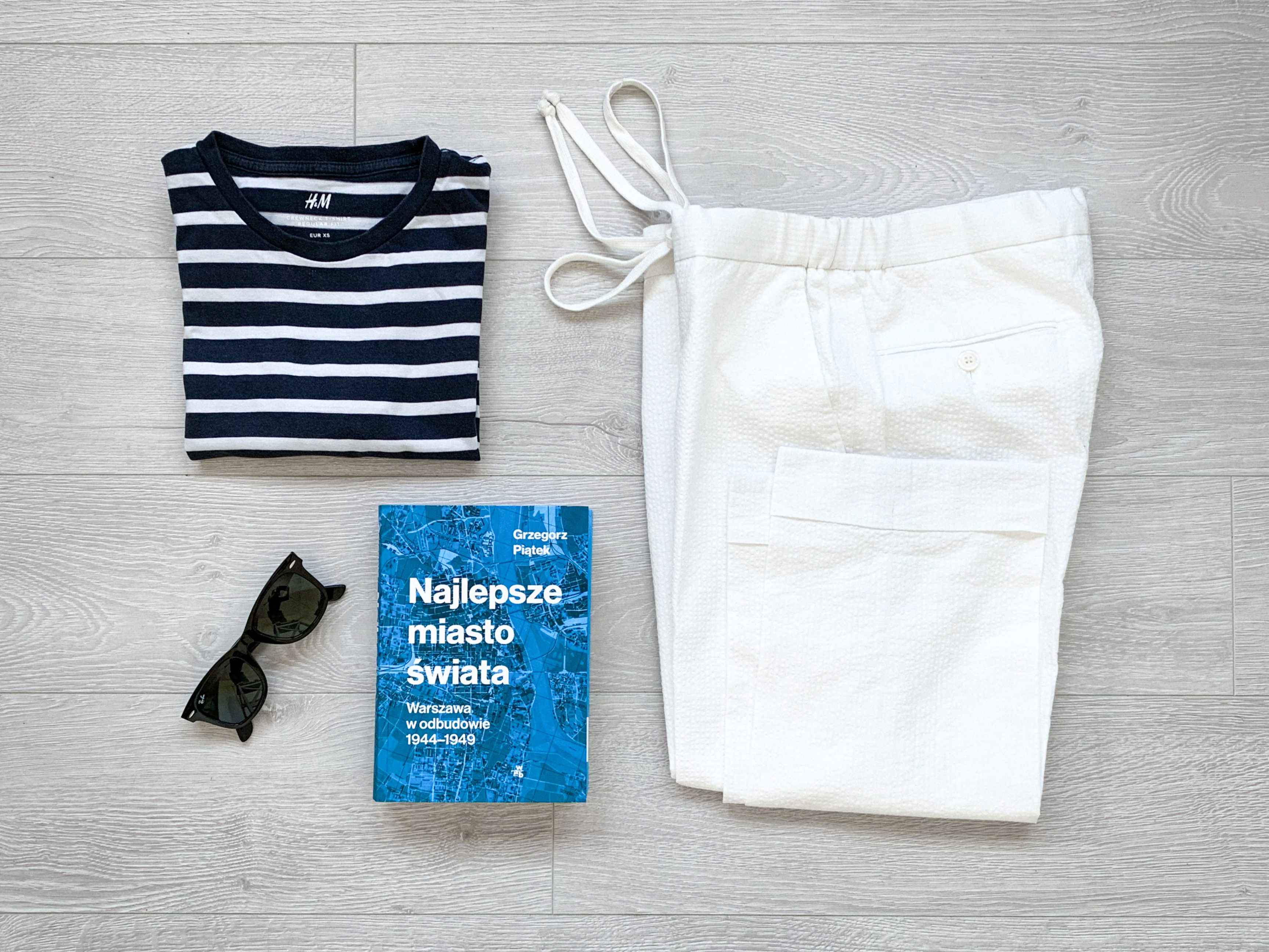 For a warm-up, something truly worth the hottest days of the year. Comfortable pants, loosely tied with a drawstring. Lightweight cotton t-shirt in white and navy stripes. Add sunglasses and an addictive book - and you have the perfect combo for lazy afternoons spent sitting on a beach/terrace/balcony/in the garden, warm summer evenings after a busy day or weeks spent on vacation.

It might seem that the outfit pictured has nothing to do with classic menswear, but that’s not the truth. The trousers are high-rise, have a sharp crease running down the legs and turn-ups at the bottom. Even a loose t-shirt tucked in in such trousers can look good and flatter man’s silhouette, optically slimming the waist and enhancing the upper part of the body. Already sounds like a much better alternative to some sport shorts and a battered t-shirt, right?

However, you could even go a step or two further and... 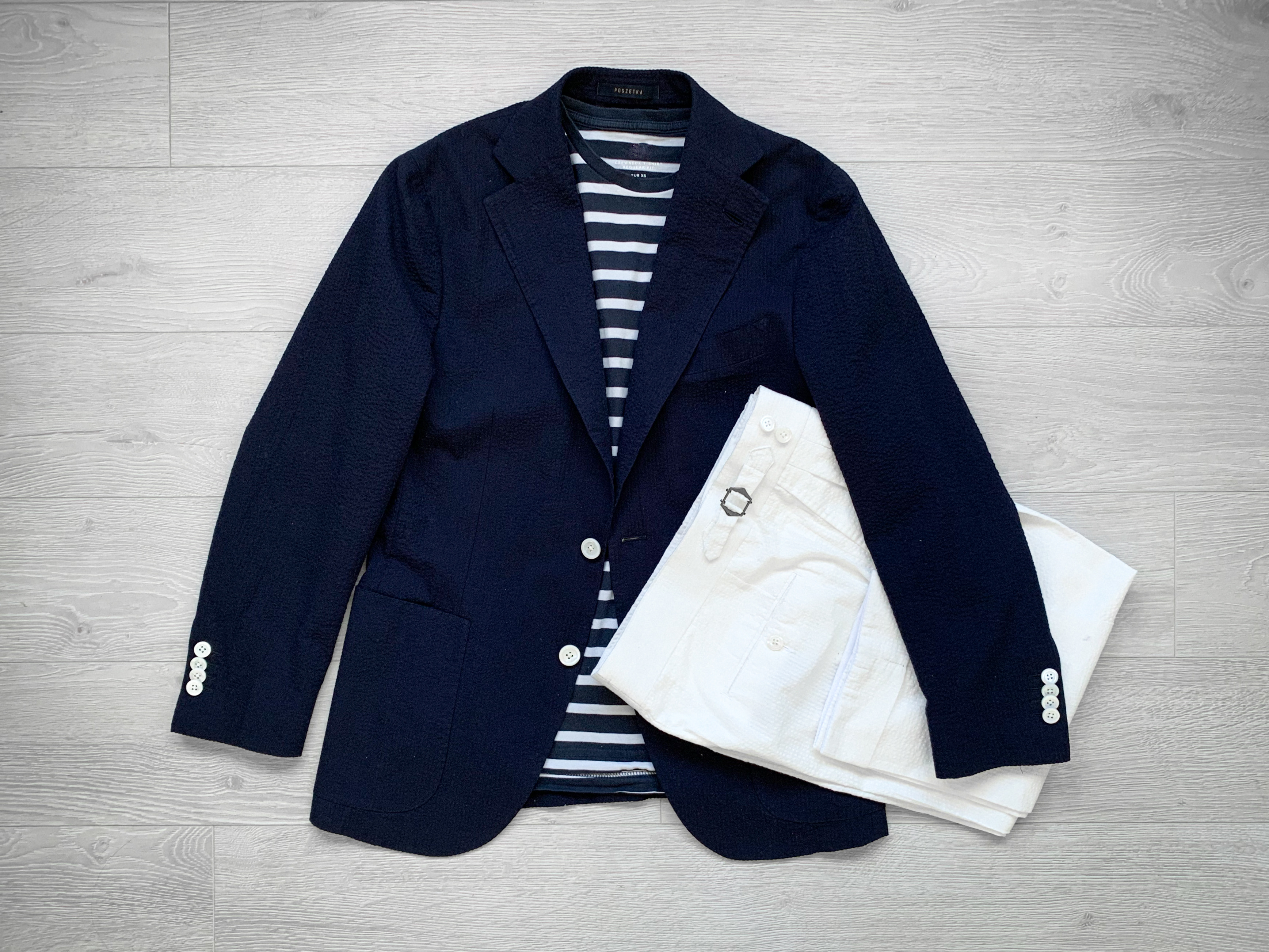 T-shirt with a blazer?!

...add another layer on top, a jacket - in this case, a navy seersucker blazer. Together with white trousers and a striped t-shirt, it forms a pretty classic combo with a naval theme.

However, we recommend replacing the drawstring trousers with the alternative, formal pair, double-pleated, with extended closure. Well, the change is not necessary - both outfit versions can look good - but those shown earlier might look inappropriate or just weird for some. These are easier to pair with a jacket, not being so controversial.

Although the outfit is made up of three pieces in only two colours total, it doesn’t look too boring. Bold, contrasting horizontal stripes and seersucker’s heavily textured surface compliment each other and give the outfit enough visual interest to look complete and thought through, not too plain or flat. 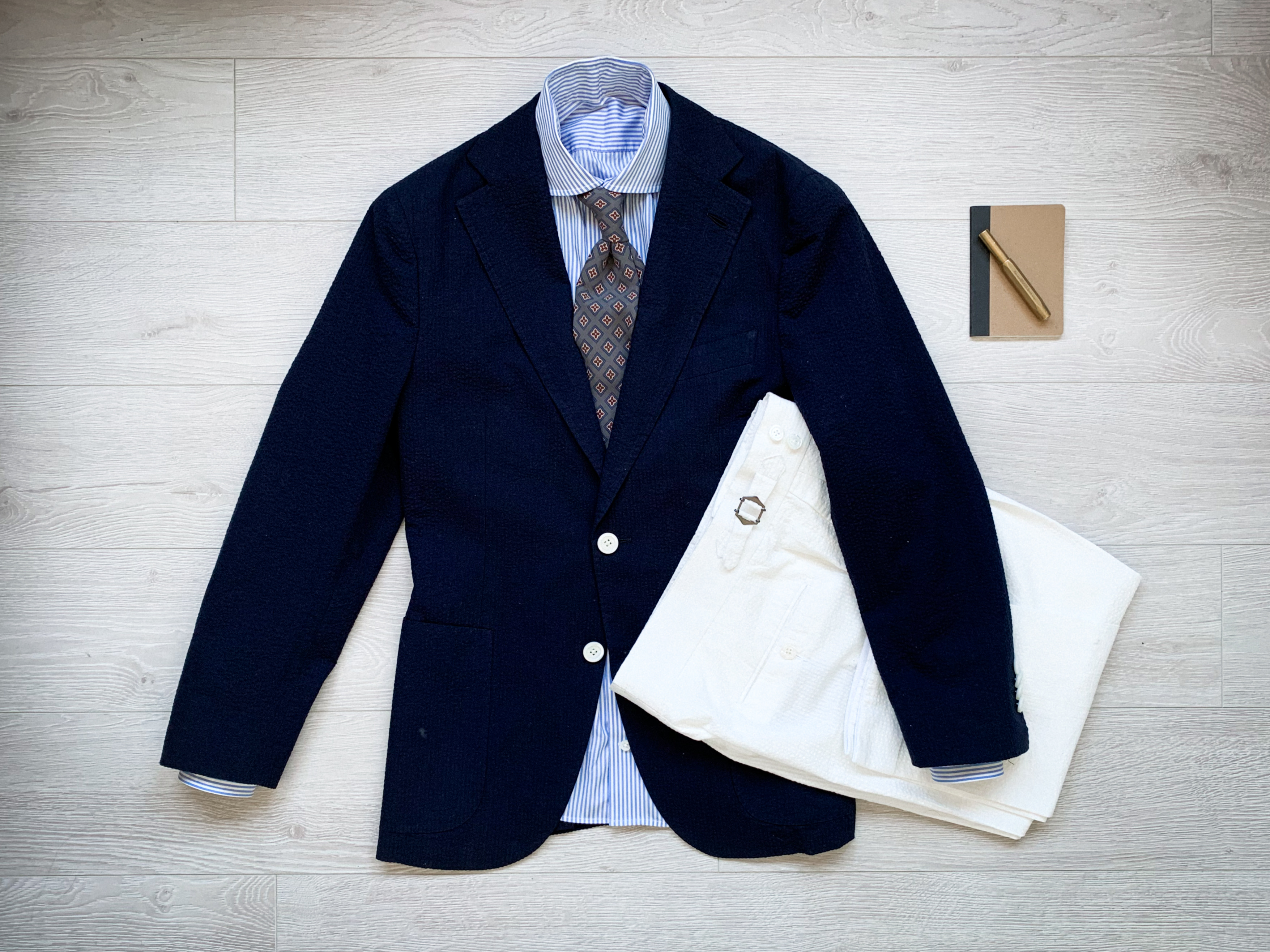 Let's jump for a moment to the other end of the formality spectrum, a safer territory for many of us. Let's give up the dangerous and treacherous meanders of casual (oh, sometimes just one wrong step is enough to expose yourself to the merciless fire of criticism ...) and think about more stereotypical classic menswear things.

A coordinated set based on the same trousers/jacket combination as above will be the natural choice. All you have to do is to replace the t-shirt with a shirt and tie. Instead of bold horizontal stripes, go business with narrow vertical ones. Pair them with a matte silk tie, let’s say an ancient madder in greyish blue tones.

Everything together looks, well, elegant. The formality level of all pieces is quite consistent, the textures match, everything is summer-appropriate - but not too casual. You can easily wear such a combo to work and well into the night, even if you are just going for a casual glass of wine on a piazza with your date.

Feel free to experiment with different shirts (plain blue, pink, some university stripes, checks, maybe even madras?) and ties of your choice - possibilities are endless! 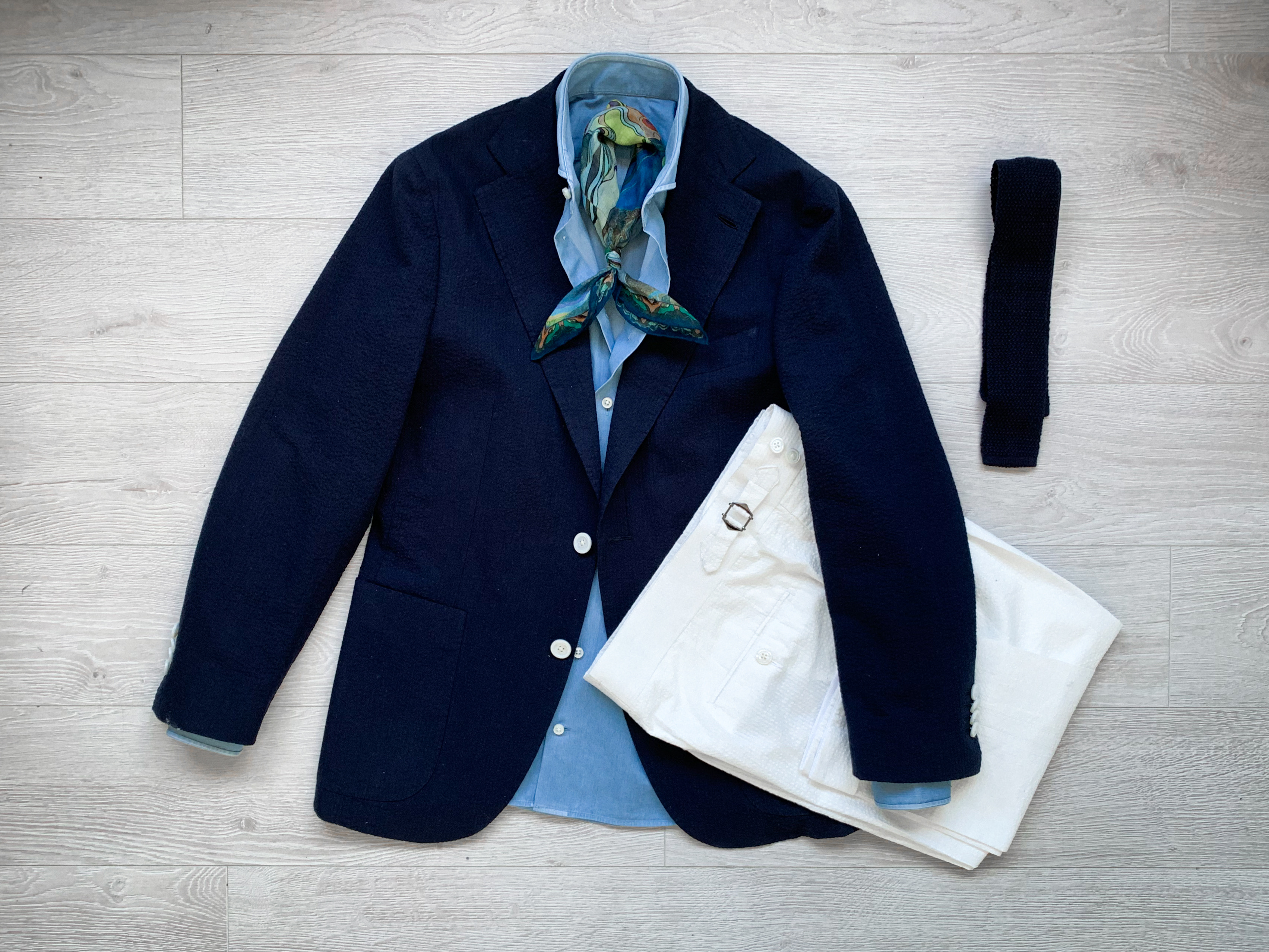 Let’s loosen it up a bit

Give up the tie and move down on the scale of formality by a few steps - but leave the blazer and trousers unchanged. Take a washed denim shirt (but rather one in a dress cut) and leave its 2 or 3 buttons undone, because hey, it’s summer.

Optionally - add a scarf for a pop of colour. Or as I should rather say, a small square scarf - or just a pocket square tied like this, as we did. It is a lighter, more delicate (or as some might say, feminine) alternative to the old-fashioned ascot that evokes associations with rich elderly man who spend their time smoking cigars and cruising on their yachts.

If you don’t feel brave enough to wear such an accessory (although I personally recommend trying that), you can go in the opposite direction and tie a simple navy knit instead. It will make the outfit monochrome and totally patternless, but still complex and interesting, based solely on textures. Just one little change, but a completely different effect! 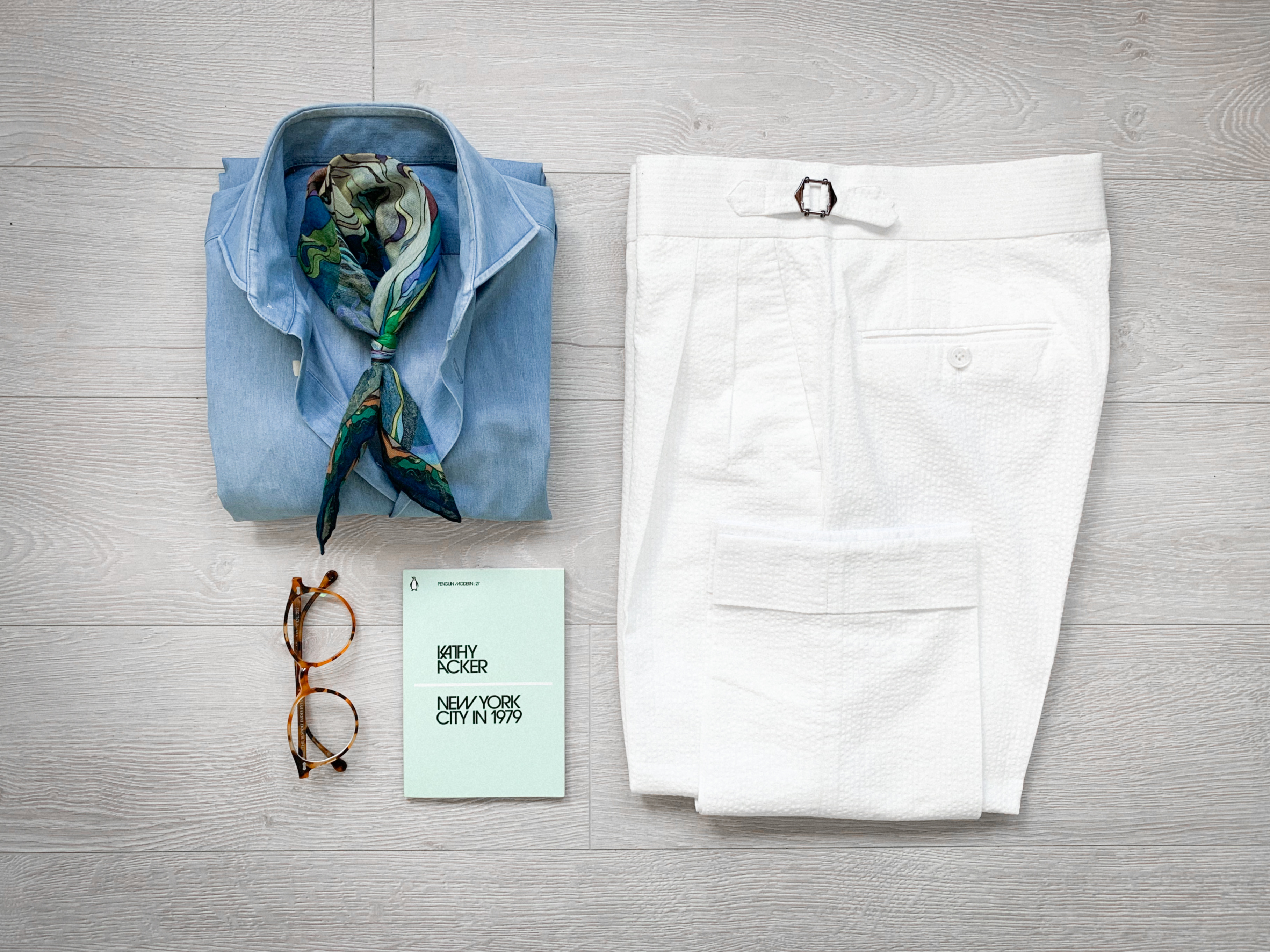 And we go (almost) full circle

For the last outfit featured today, we go back to something basic, without a jacket. Let's leave the shirt same as earlier - although it could easily be replaced with blue linen or a pink popover - tie a scarf at the neck - this time I urge you to do it even more eagerly - and again, no surprises, finish it off with white cotton seersucker pants. Just one subtle change, one piece less - and we’ve jumped to a different level of formality.

Here, however, another change could be made - the classic pair of trousers could be replaced by the drawstring ones, as the more casual option. I’d personally say that in the form as pictured, the outfit looks like something that will look best worn while reading a book at a seaside cafe. In the alternative version, more like something to be worn for long barefoot sunset walks on a beach.

Wow, we are being a bit too cliche now. Time to end this and sum everything up!

Today's article skewed heavily towards the dreamy summer themes. Maybe it is caused by the longing for normality and holidays, maybe this is just the nature of white pants and cotton seersucker. Either way, all the outfits shown here should prove at least a bit inspiring to anyone and easy to copy or transplant to another ground.

Feel free to experiment, as always. See you next time!