Corduroy - some say it’s an old man’s fabric, some think of it as the fabric that they used to wear in their childhood, others are reminded of (a little embarrassing) 70s fashion by it. Why is that and why is there no real reason to stay away from this fabric?

Let’s make it brief, because majority of you should be already familiar with how corduroy looks like” it’s the characteristic fabric with wales, usually made of cotton, although it used to be wool in the beginning. Wales can be really narrow or wide - and they are measured by their number per inch. For example, 12 wale is around the middle size (and a fairly standard corduroy used for trousers or suits), much smaller counts (like 4 wale) are used primarly for furnishing and bigger ones for shirts or baby clothes. If everything is clear now, time to move on. 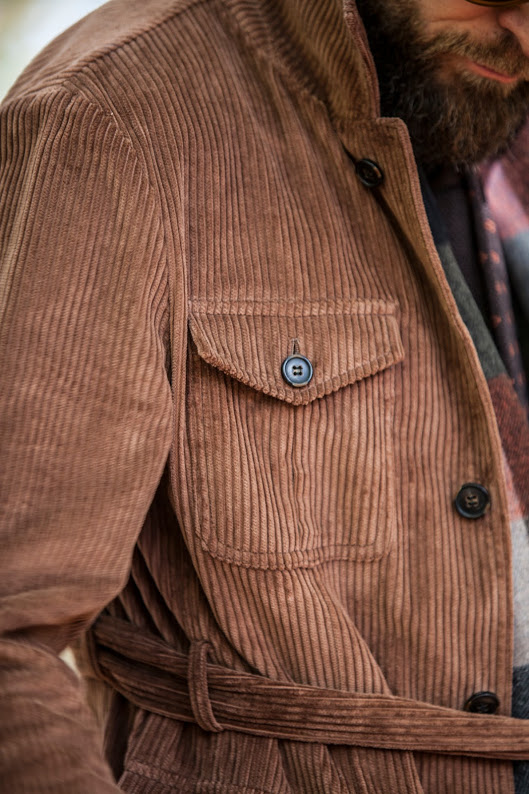 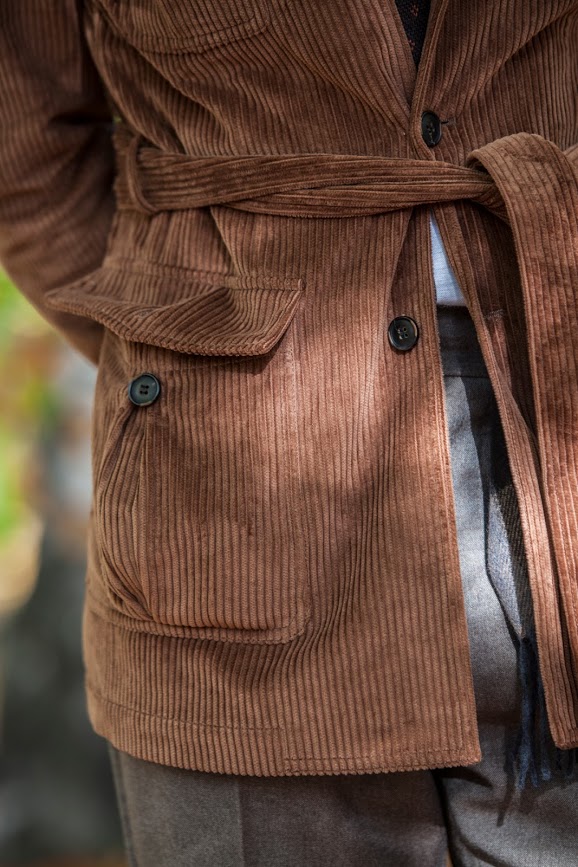 One of the most popular theories about corduroy’s origin, probably the favourite one among bloggers and internet community, refers to his alleged royal origin, linking the English name corduroy with the French corde du roi  (meaning king's cord). Apparently, it would be a fabric originally worn on the 17th century French royal servants ...

...What a pity that there is no real reason to believe this romantic story - dictionaries indicate that the French etymology of the word is false. A more plausible (but less exciting) explanation of the origin is that the name corduroy originated from combining two words - cord and duroy (rough woollen cloth woven in the 18th century England) - describing the appearance and texture of this type of fabric. 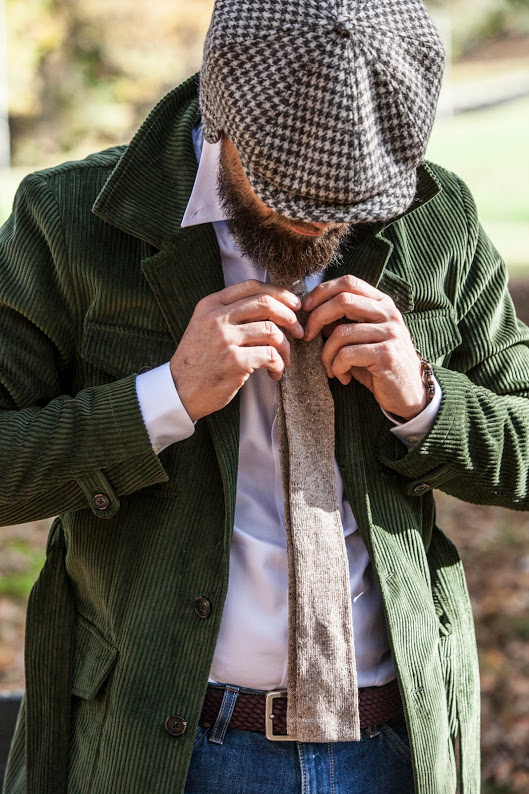 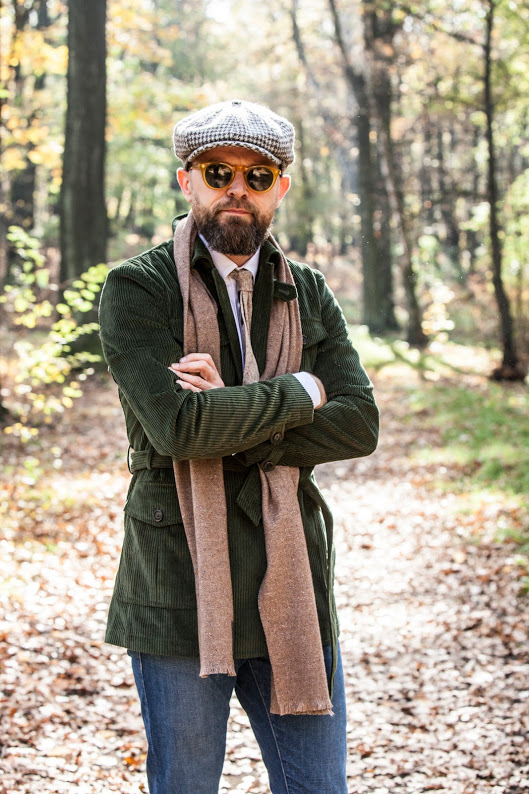 Not the 17th century, but a hundred years later. Not France, but the British Isles. Not the royal court, but towns and villages - corduroy began its life as a fabric used by the rural community for their work clothes, valued for its strength and good insulation properties, which it owes its dense weave. Well, the only connection of this fabric with the upper class is that it has also been adapted for the traditional British clothing worn when hunting or shooting.

In fact, its global career did not bloom until the 1970s, when we experienced just an explosion of corduroy popularity. Corduroy jackets, corduroy suits, corduroy wide bell-bottoms. Corduroy furnishings, corduroy cushions, corduroy trims. Thin and thick wales, soft or rough texture, subdued and flashy colors. Everything up to exaggeration and surfeit. Today, we look at the whole decade, hairstyles, mustaches and photos from that times with a smile. The 70s fashion will not be remembered very well and unfortunately with it the corduroy, which began to be labeled as old-fashioned or embarrassing.

The stereotypes are hard to fight with but the truth is that corduroy is not that bad or hard to wear as some say. Denim once was also perceived as cowboys’ cloth and used for some rather ugly fashion experiments, but that has been already forgiven and forgot. It seems that it will be the same with corduroy, which in the last few years has already appeared widely in the collections of big fashion houses and in chain stores and customers have already become accustomed to it. 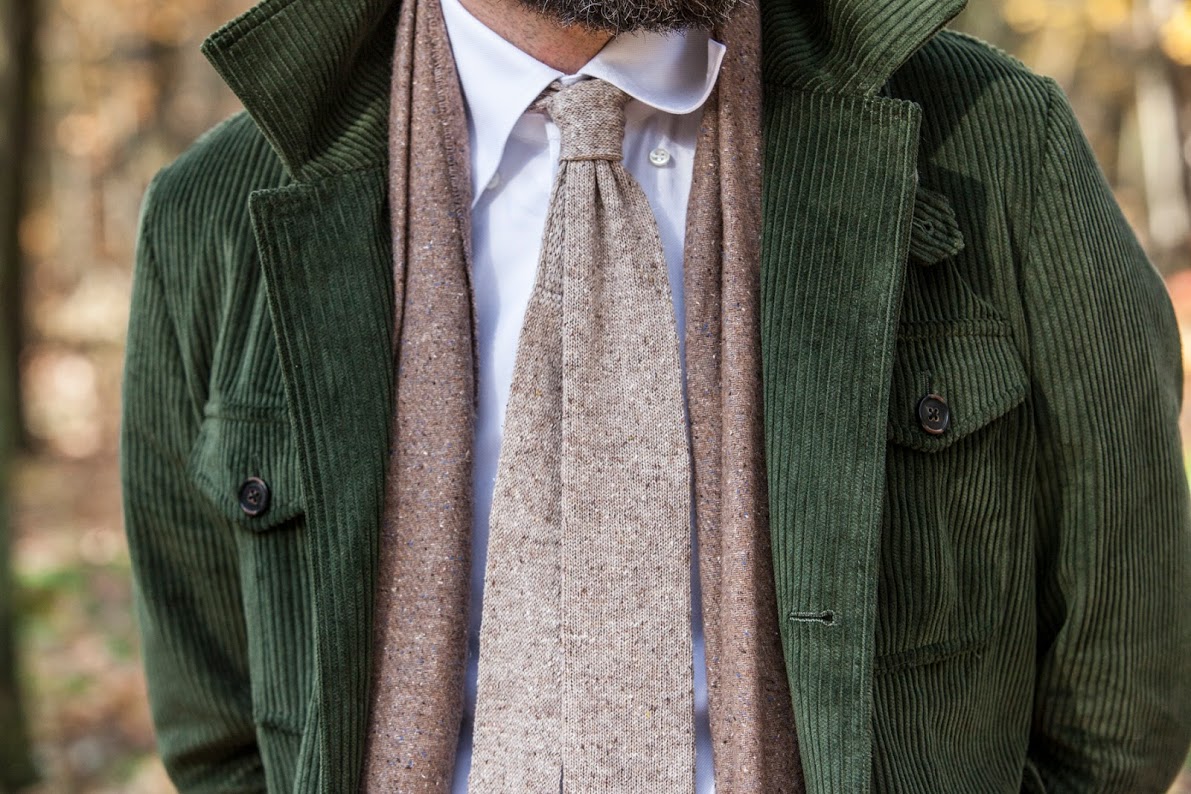 So, now when you know you can , what made of corduroy should you buy? What to choose to make it a practical, universal and sartorial choice?

Corduroy pants, or simply cords, are always the basic choice. Rather for autumn and winter, usually in earth tones (brown, olive, mustard yellow), although modern interpretations (gray, white, almost-neon colors) are also emerging. Five pockets or classic trousers (higher waist, crease, cuff will look good), worn with sweaters and tweed jackets or possibly more modern, even with a blazer. However, they will not be liked by everyone - cords have the tendency to loose crease and shape, look crumpled and generally quite worn.

A corduroy sportcoat is a difficult matter It is unfortunately still associated with elbow patches, elderly teachers and academic professors. It will not be easy to combine with coordinates and certainly not with other corduroy elements. By choosing the right color and cut (it cannot look outdated) one can achieve a good effect, but in most cases it will take great courage, will to experiment and a good tailor.

Corduroy suit - oh, it's an interesting idea that might look good. Currently it takes just look at Instagram feed and you will surely stumble up a photo of a good-looking one. Such a suit, however, has a lot of minuses - pants behave like cords use to, the whole suit can quickly look worn, has very limited usability (a suit, yet extremely informal and not fitting in the business dress code) and is not easy to use as separates. 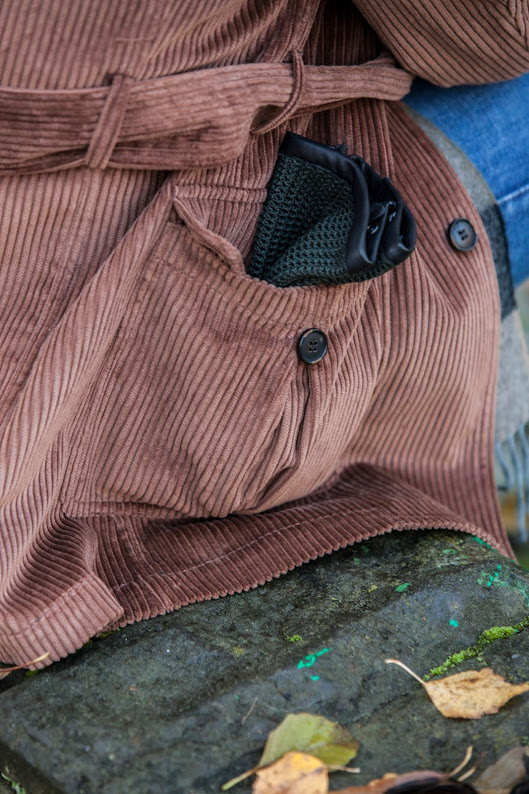 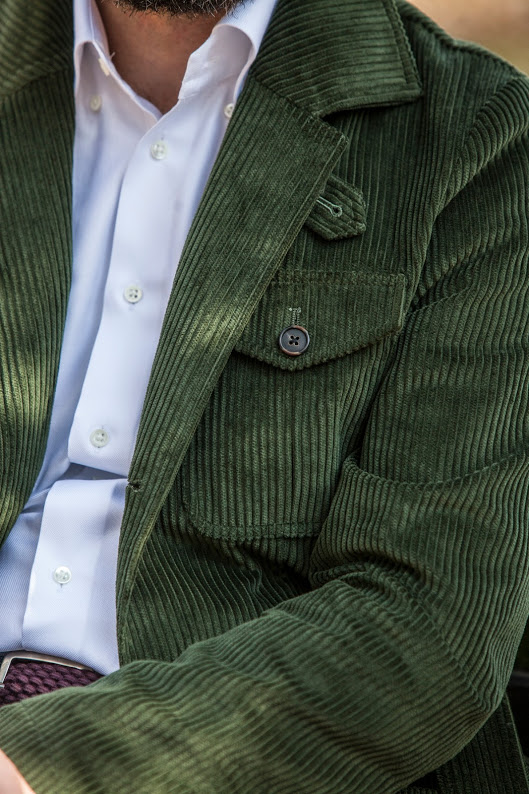 A good idea would be to think towards some less typical wardrobe items, rather more casual than formal ones - workwear enthusiasts have their corduroy workshirts and trucker jackets made of this fabric. However, you can approach the topic in a little more interesting and appropriate way in terms of the so-called classic men's elegance.

In the previous blog post we talked about safari jackets and the possibilities of their modern use. It was also mentioned that it is worth choosing those made of warmer fabrics - so why not decide on corduroy as a viable option? 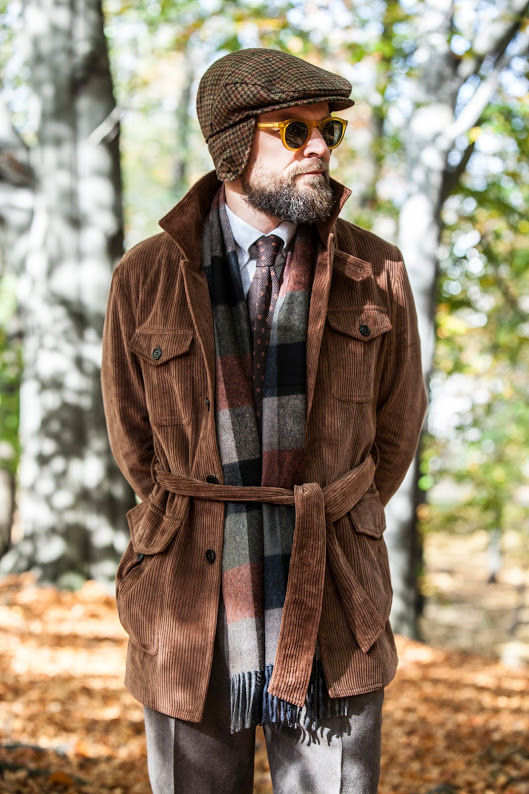 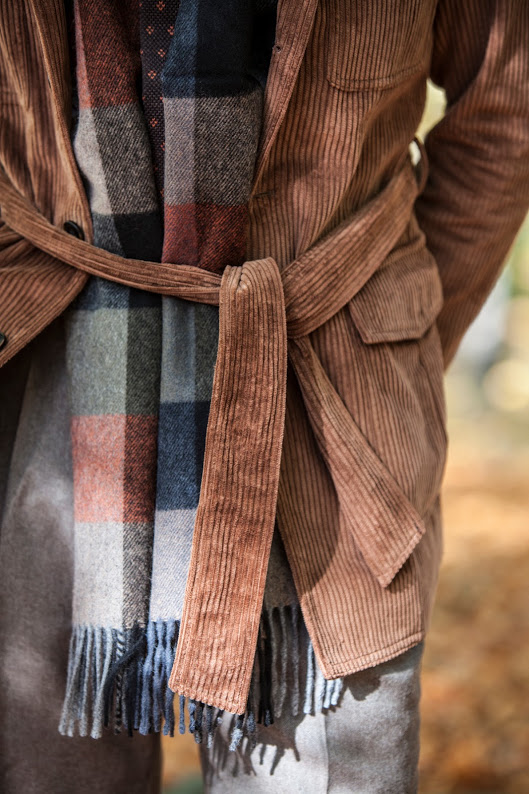 This fall, the Poszetka’s collection includes two models of safari jackets cut from such a fabric - more precisely, Japanese cotton corduroy with fairly wide wales and a wonderfully soft hand - in two different colors: milk chocolate brown and deep, bottle (or british racing) green. We don't have to talk too much about these colors, so we will only briefly remind you, that both are beautiful shades appropriate for this time of year, easy to combine with other colors of autumn and winter wardrobe. The classic safari cut, tied with a belt at the waist, looks great in corduroy - it just invites you to put it on, luring with its softness and comfort.

To find out, it is worth trying yourself. This jacket is so versatile and practical that you will not feel the need to take it off. Maybe even while working outside and on some rural trips... 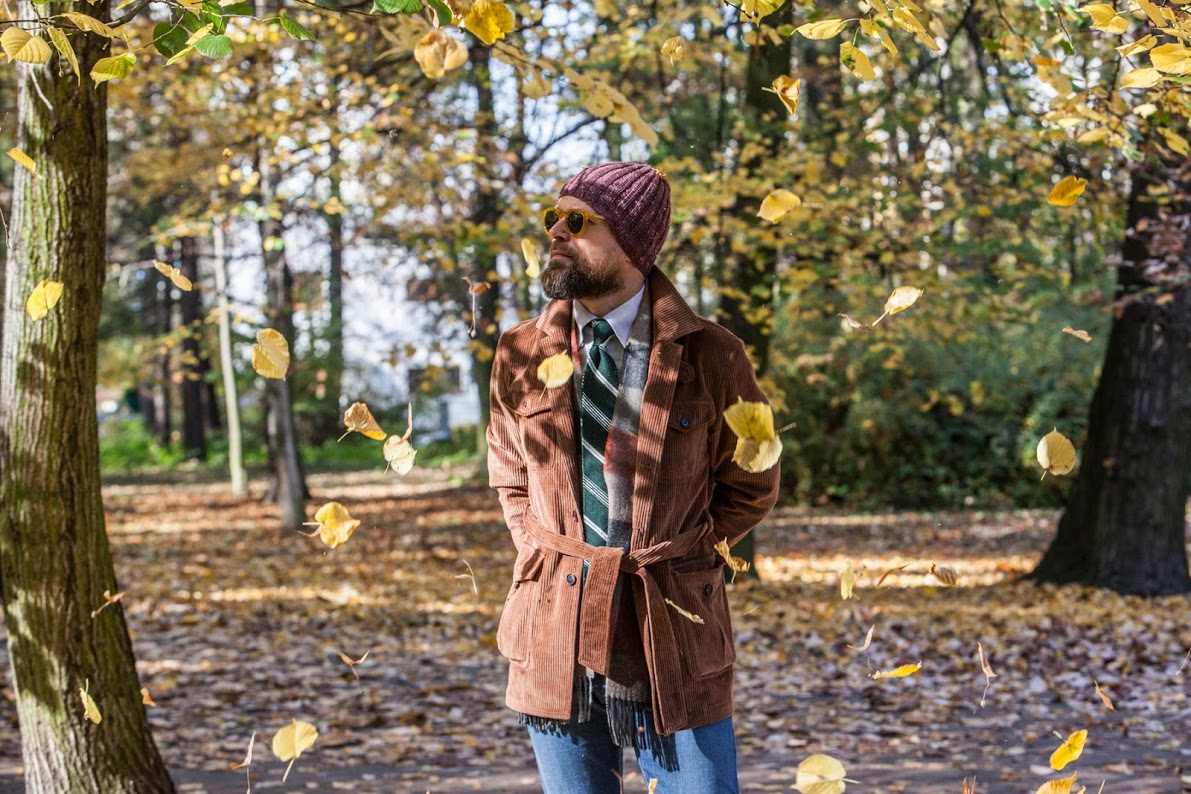 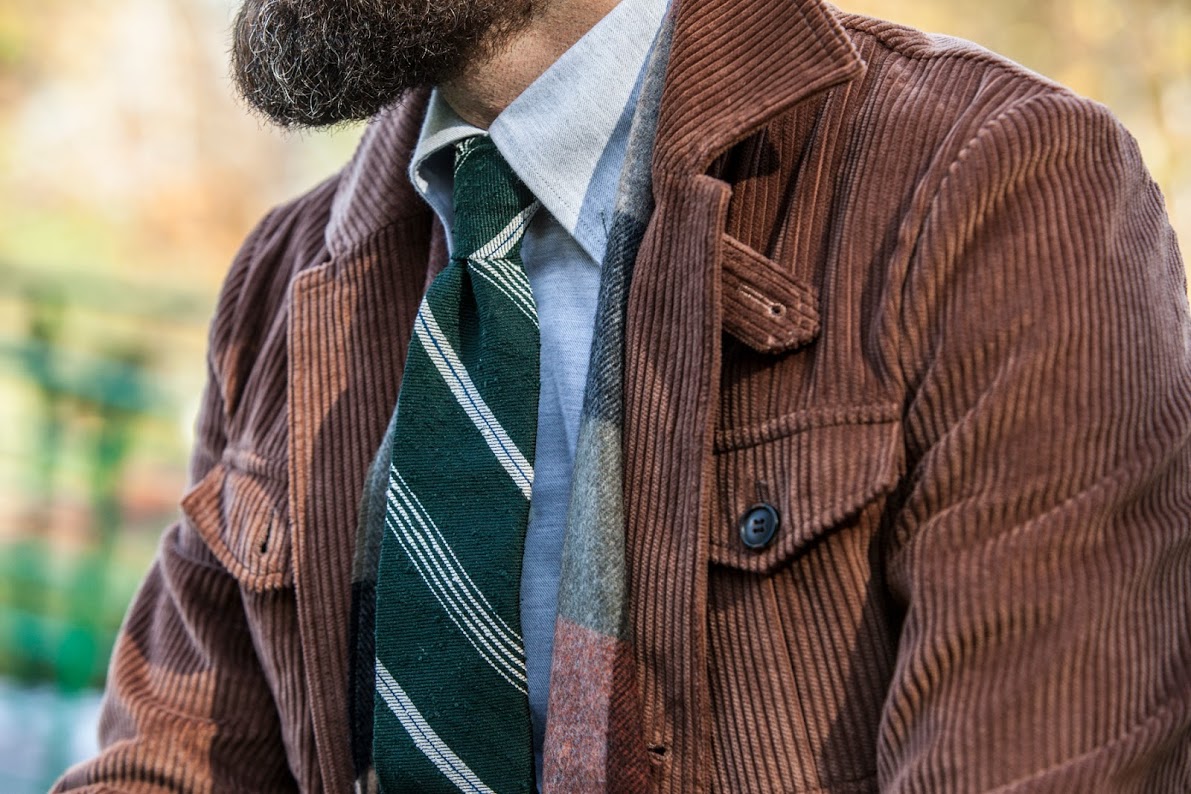 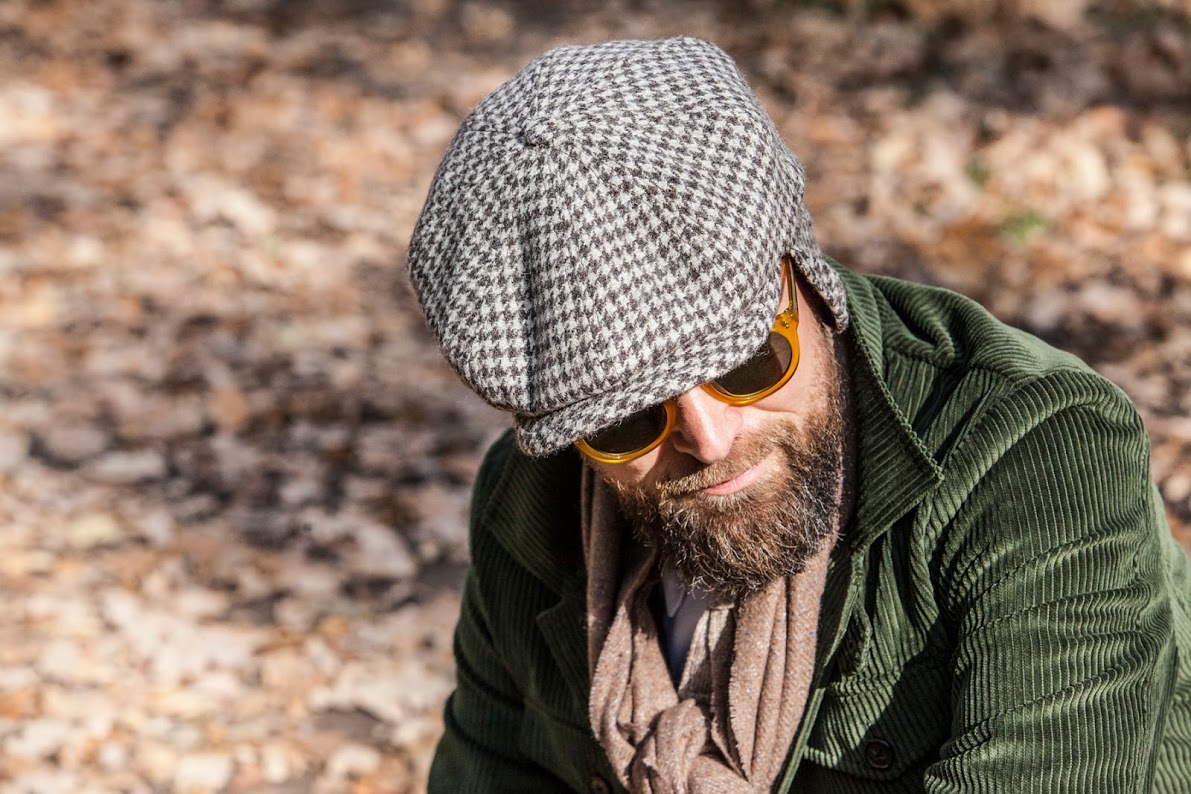 4.89 / 5.00 2986 reviews
IdoSell Trusted Reviews
2022-08-04
Great price/quality ratio
2022-07-10
Very good value for the price, and I like to receive an email at each step, specially when the purchase is delivery, attention to detail Nice job, I will order soon
View all reviews (2986)
This page uses cookie files to provide its services in accordance to Cookies Usage Policy. You can determine conditions of storing or access to cookie files in your web browser.
Close