(Not Only) Neapolitan Trousers

Neapolitan tailoring boomed in the recent years, paving its way to the top. Its synonym became the la giacca napoletana  - a jacket based on a lightweight construction, with any unnecessary padding removed, comfortable and stylish. Could such a jacket be accompanied by ordinary trousers?

A suit consists of two or three elements. It's good that they are coherent with each other stylistically - so an extraordinary jacket should be accompanied by equally spectacular pants. Neapolitan tailors know something about it, which is why not only the archetypical giacca  comes from their city, but also some very interesting pantaloni .

Interestingly, hardly any tailor shop in Naples cuts trousers for their customers on-site, even if they order the entire suit there. This is done by a qualified pantalonaio  - a tailor skilled in making pants. Often it is a friend, sometimes a person who has his own shp (dealing only in sewing pants and trousers) and own clients, but also does some external work.

This specialization has led to more attention being paid to the production of pants than usual, compared to e.g. big houses of the Savile Row or other European tailors. Neapolitan masters began to add some artistic flavors, unusual details and meticulous finishing. Hence the fancy bar tacks at the ends of long seams (e.g. at the pockets or pleats), additional belt loop, extended closure, complicated fly system fastened with 5 or 6 buttons, side adjusters and many, many more. 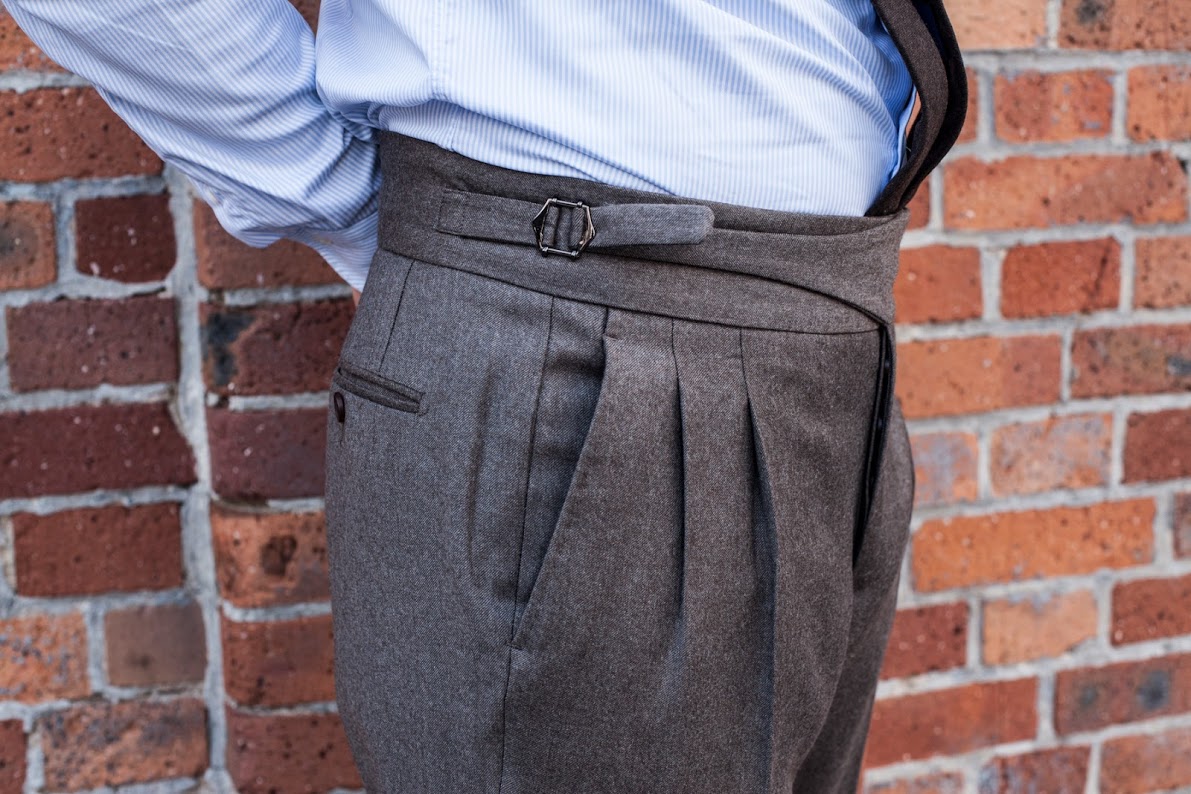 Let's not forget, however, that Italians always used to take inspiration from the north, especially the British Isles. Just as Vincenzo Attolini, who drew from the tradition of the Savile Row creating his vision of the neapolitan jacket did, so do contemporary tailors, basing on proven solutions while making their products (like double pleats). Also, as is often the case in men's fashion, uniforms have a huge impact on civilian clothes. Merged together, these two inspirations are responsible for gurkha pants making their way into neapolitan tailoring.

These pants, derived from the uniform of the British army and Nepalese soldiers, are distinguished by two pleats, high waist and above all, a very high waistband, fastened with two side buckles. Although the original version may seem rather rugged and rough, just a few cosmetic can turn gurkhas into a sartorial and intriguing pair of pants. Rubinacci (famous Manny pants, their flagship RTW product), several other brands and many smaller craftsmen made their own, more subtle versions of this cut. They regularly appear on the legs of famous influencers, at Pitti Uomo fairs and in the social media. 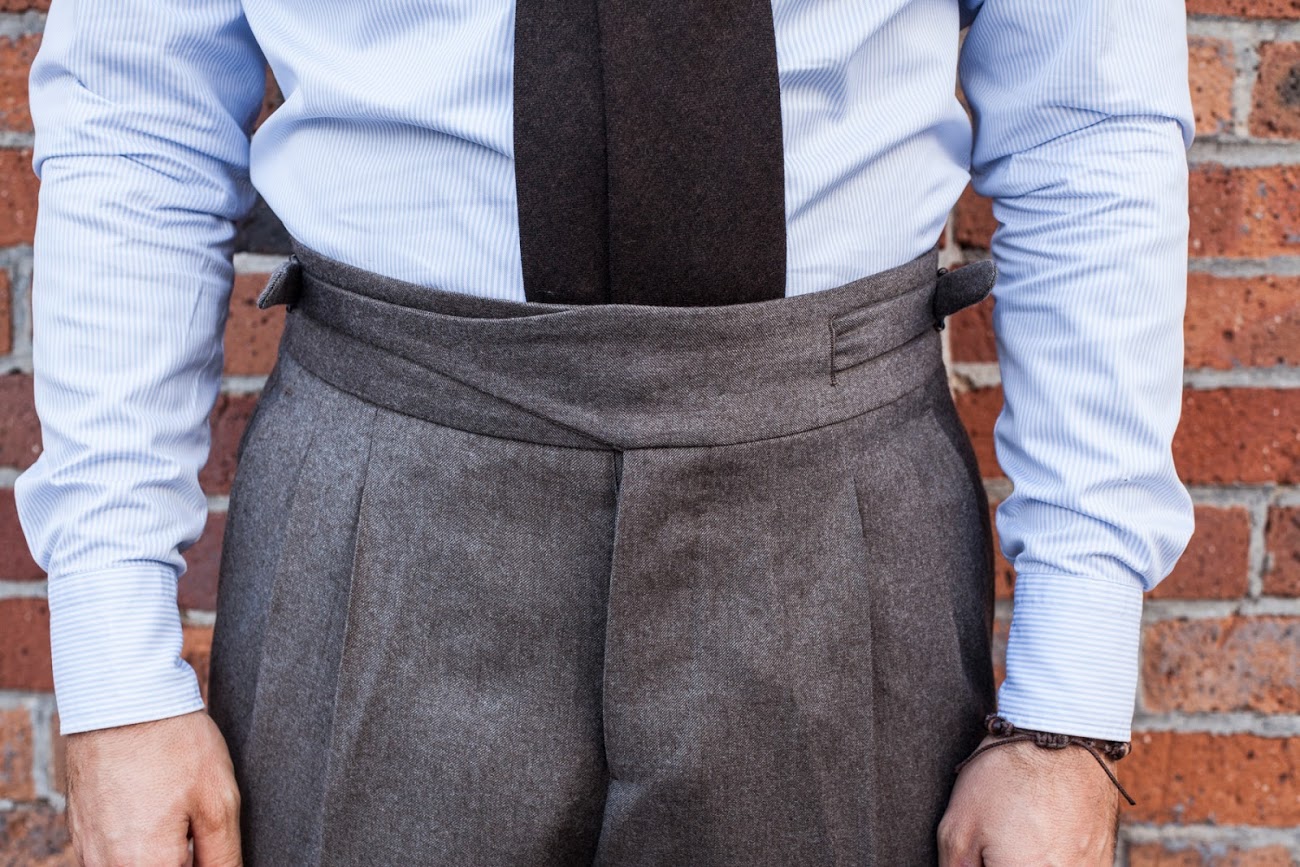 One pair of such pants also found its way into the new Poszetka’s collection - it is a model with delicate buckles and finishing, subtle enough to serve as a classic pair of pants to be worn with a jacket. Italian influences can be seen even in the choice of fabric - it's light and British (yes, Italian tailors just love fabrics from the north) flannel from Alfred Brown. The cold shade of beige is also a nod towards the south - less conservative than the medium gray, the color will be better with Neapolitan tailoring and its color palette than with heavier British clothes. 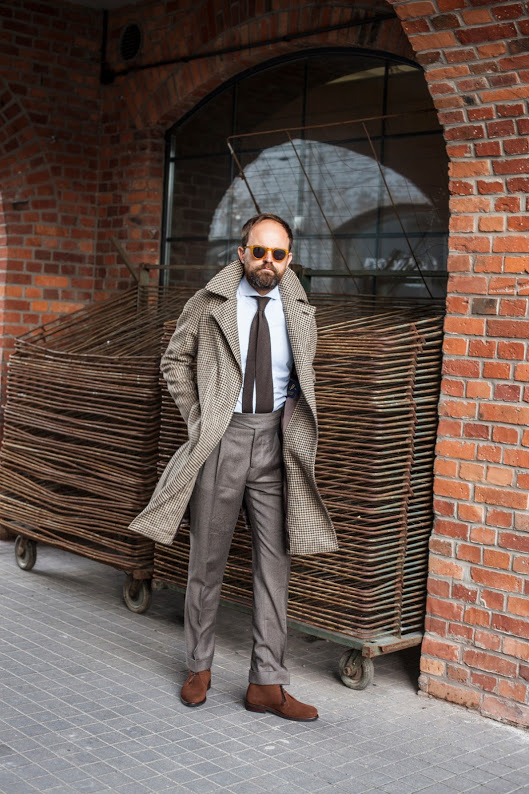 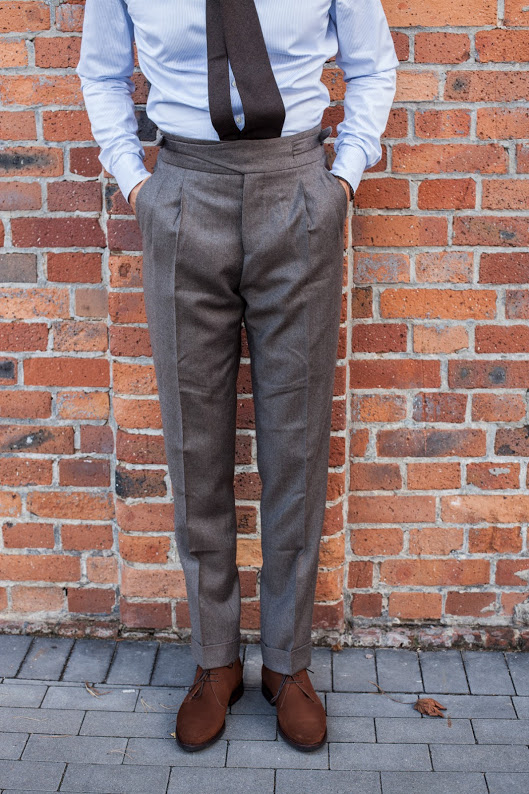 Trousers inspired by the gurkha cut will look even more minimalist under the jacket than a pair in a more conservative and classic cut - after all, only a smooth strip of fabric will be visible from the front. When the jacket is removed, the unusual fastening method will be a bit more visible, but mainly for other enthusiasts, a bit like an elegant club membership sign, which is hard to recognize at first glance. Aren’t we looking for such details in custom tailoring and clothes inspired by it?

4.89 / 5.00 2986 reviews
IdoSell Trusted Reviews
2022-07-31
Nice pants. Only let down are the buckles, they are in a cheep material insted of chromed steel or stainless steel. Otherwise 5 stars
2022-07-09
Produit conforme et de qualité, bon suivi de la commande et livraison rapide. Je recommande.
View all reviews (2986)
This page uses cookie files to provide its services in accordance to Cookies Usage Policy. You can determine conditions of storing or access to cookie files in your web browser.
Close